Sunscreen poses another threat to coral reefs | Environment | All topics from climate change to conservation | DW | 13.04.2018

Some chemicals in sunscreen can kill corals, researchers have discovered. So how to protect your skin and reefs at the same time? DW reports from Bonaire in the Caribbean. 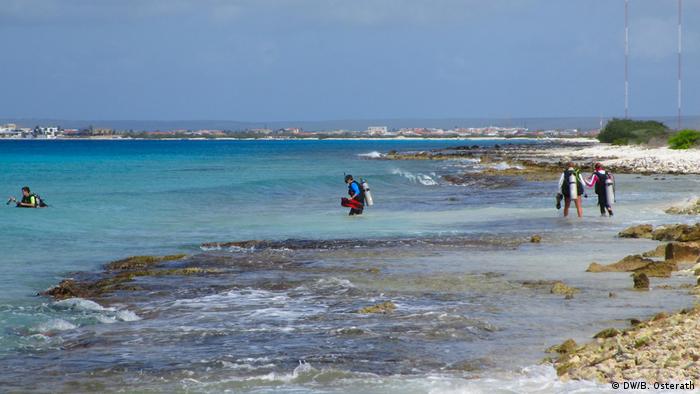 At a dive center on the island of Bonaire in the Caribbean Sea, about a dozen scuba divers — incluing me — are getting ready for their dive to the coral reef. It's only 9 o'clock in the morning, but the sun is already burning. Before I slip into my wetsuit, I quickly duck into the shade.

Bonaire, 60 kilometers (37 miles) off the Venezuelan coast, markets itself as "diver's paradise." The coral reef begins as close as 20 meters (66 feet) from the beach, and abounds with brightly colored corals, fish and other sea creatures.

But this paradise — and its income from tourism — is in danger, due to global warming and seawater pollution.

And now, evidence suggests that even sunscreen, an absolute requirement at a sun-drenched spot like this, may be a part of the problem.

Sunscreens contain chemicals such as UV filters, which protect the skin against sunburn and skin cancer.

"It has been shown that some of those chemicals can be harmful to corals and other organisms in the environment," says Diana Slijkerman, an ecologist at Wageningen University and Research in the Netherlands. She conducts research on seawater quality around Bonaire. 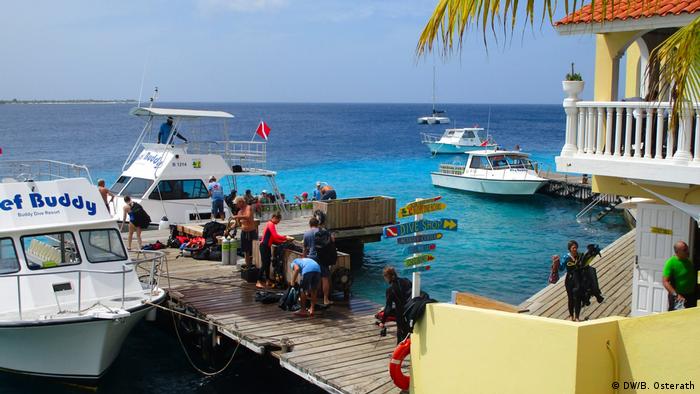 As far back as 2008, Italian researchers demonstrated that sunscreen can promote viral infections in corals and thus "play an important role in coral bleaching."

In 2016, Craig Downs, a biologist and director of the environmental lab Haereticus in the state of Virginia, found that oxybenzone can cause DNA damage in coral larvae, interrupting their development and killing them off.

"Young corals are even a thousand times more sensitive to the chemical than adults," Downs says, adding that oxybenzone is also poisonous for developing fish, sea urchins, shrimp and oysters.

American sunscreen is out of date

If you buy sunscreen in Europe or Australia, chances are high that it doesn't contain oxybenzone. 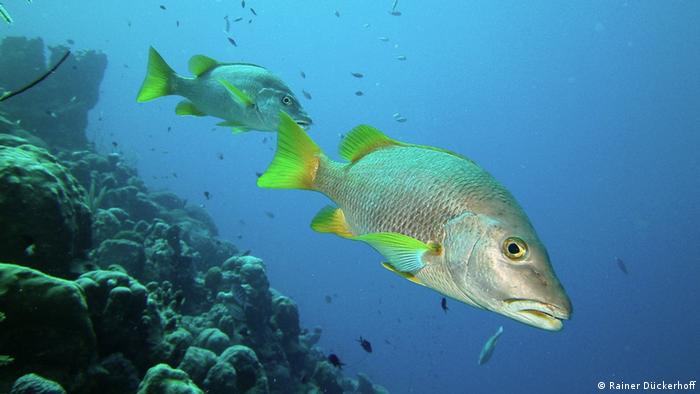 "Compared to the 1970s, much more attention is nowadays paid to the aim that new substances not only reduce the risk of skin cancer, but are also environmentally safe," he told DW.

But, according to Slijkerman, "oxybenzone is still widely used in American products.”

US sunscreen contains many "old-fashioned" ingredients that are hardly used in the rest of the world — including oxybenzone.

That's because the United States Food and Drug Administration hasn't approved modern UV filters for the US market. Even though those substances are used for decades in other parts of the world, the FDA doesn't consider them safe.

Diana Slijkerman took seawater samples in Bonaire in 2016 and 2017 and had them analyzed.

"We found oxybenzone, in concentrations that are possibly harmful to the environment, according to scientific literature."

The more tourists who are in the water, the higher the concentration of oxybenzone is a few hours later, she found. 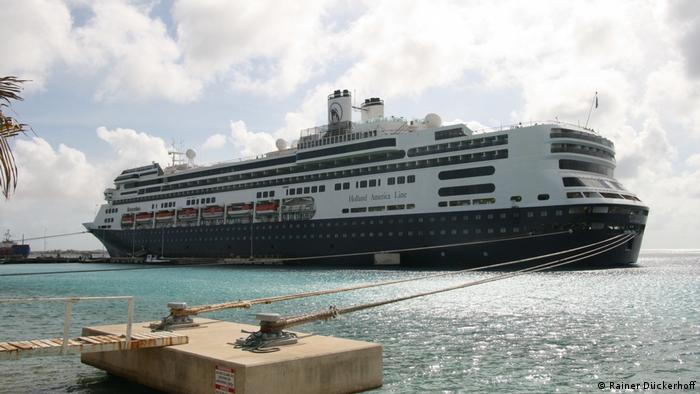 Each year, more than 200,000 tourists come to Bonaire via cruise ship

Bonaire is a popular stop for cruise ships, each bringing more than 3,000 tourists to the island at once. A lot of these people are American, and they bring sunscreen with oxybenzone from home to the island.

Even if tourists only use sunscreen on the beach without entering the sea, the ingredients will still end up in the ocean, because they are washed down the drain in the shower.

"Oxybenzone is pervasive in the environment," says Craig Downs. "It comes from swimmers, and — more importantly — from sewage that is dumped into streams, rivers and into the sea."

Oxybenzone is also found in other cosmetic products such as lipstick and shampoo. In the US, a product may contain oxybenzone at a concentration of up to 6 percent, and in the EU up to 10 percent - despite the fact that it is officially classified as "dangerous to the environment" and "toxic to aquatic life."

"The only way to prevent its damage is to ban it," Downs says.

Downs is fighting for a complete ban of oxybenzone worldwide. It is not only dangerous for sea life, but for humans as well, he says.

"The human toxicological data are stunning," he says. "Oxybenzone is an endocrine disruptor, it acts like an estrogen and anti-testosterone chemical." 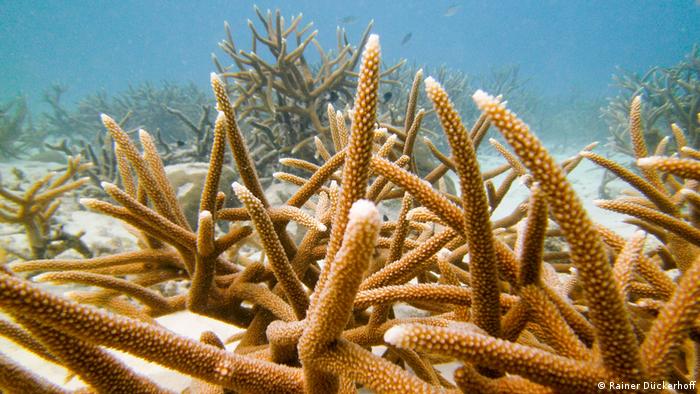 Elkhorn/Staghorn corals are endangered. Their population has dropped by 80 percent in the last 30 years.

Studies found that the substance might interfere with a fetus' development, so that babies are born with lower birth weights. It is also suspected of causing cancer.

"Corals are exposed to much greater risks, especially to global warming and water pollution from untreated wastewater," says Markus Schwind of BASF. "Fighting those must be the top priority."

Scientists from the industry say that there is too little data to justify a ban.

Slijkerman acknowledges that point: "Indeed, we don't know for sure yet how serious the harm [of oxybenzone] is," she says.

As an ecologist, Slijkerman still calls for the precautionaryprinciple: "It is very easy: simply choose a different product."

Slip on a wetsuit 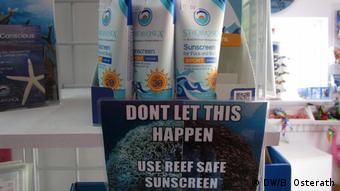 But finding an oxybenzone-free sunscreen can be difficult.

In supermarkets on Bonaire and on the internet, companies sell so-called "reef-friendly" sunscreens. But some of those still contain oxybenzone.

To be sure, you need to read the label with the ingredients — and know your chemistry.

Giving up sun protection for the sake of the corals is definitely not an option, Slijkerman points out. But going for a long-sleeve shirt and a hat as well as avoiding the sun can save sunscreen, and thus reduce potential harm for the reef.

For divers like me the choice is easy: it's best to dive with a long wetsuit, then sunscreen isn't necessary.

A long wetsuit not only protects you from the sun, but also from the cold. A dive can easily take up to 90 minutes, and being underwater for that amount of time will definitely get chilly — even if the sea around Bonaire is 28 degrees Celsius (82 degrees Fahrenheit).