Heads of government around the world hope that new US President Joe Biden will cooperate to tackle global issues, lift sanctions and improve bilateral relations. 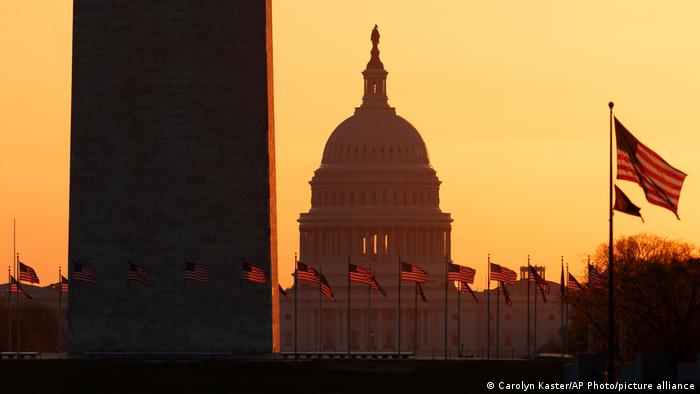 World leaders have welcomed the new administration of US President Joe Biden, marking an end to the presidency of Donald Trump, who had largely rejected multilateral cooperation on global issues.

Biden signed over a dozen of executive orders on his first day in the Oval Office, including ones that saw the US rejoin the international Paris climate accord and the World Health Organization, from which the former president had withdrawn US membership.

The new administration has expressed urgency about reversing many of Trump's policies on domestic and foreign issues.

Leaders around the world said they were looking forward to cooperating with the US in tackling global issues, including the coronavirus pandemic and climate change.

Others urged Biden to lift sanctions that Trump had imposed on their countries, hoping for a new era of cooperation with the US.

Europe celebrates a 'friend in Washington'

"This time-honored ceremony on the steps of the US Capitol will be a demonstration of the resilience of American democracy," she said.

German President Frank-Walter Steinmeier said in a video statement that he was looking forward to tackling global issues with the US, describing Biden's inauguration as a "good day for democracy.''

"Despite the attempts to tear at America's institutional fabric, election workers and governors, the judiciary and Congress have proven strong,'' he said.

German Foreign Minister Heiko Maas also said that he hoped that the US would change the course of foreign policy after Trump's approach.

"Over the last four years we saw what 'America First' meant: no coordination, no consultations," Maas told public broadcaster ZDF.

'Welcome back to the Paris Agreement'

The European Commission expressed approval of Biden's decision for the US to rejoin the 2015 Paris climate accord. "We are ready to fight climate change together again," the commission said in a statement on Twitter.

French President Emmanuel Macron also welcomed the decision. "Welcome back to the Paris Agreement," he said on Twitter.

Canadian Prime Minister Justin Trudeau also sent his well wishes to the Biden-Harris administration, saying they would work together to fight climate change and curb the COVID-19 pandemic.

Iranian President Hassan Rouhani said it was now up to Washington to review the terms of the 2015 nuclear deal and lift sanctions on his country.

"If Washington returns to Iran's 2015 nuclear deal, we will also fully respect our commitments under the pact," Rouhani said in a televised cabinet meeting.

The US would consider returning to the Iran deal based on the Islamic Republic's compliance to the agreement, White House Press Secretary Jen Psaki said in her first press briefing.

Psaki added that Biden would consult with allies concerning the future of the Iran negotiations.

Latin American leaders expressed hope that Biden's administration would bring migration reform to light and shift the US policies toward economic cooperation rather than sanctions.

The Trump administration's policies on Latin America varied, as he embraced some leaders and sanctioned others.

Memorable moments from the inauguration

Mexican President Andres Manuel Lopez Obrador urged Biden to shift the US-Mexican relations toward development, rather than security and military aid. Mexico also hopes for immigration reform policies from the US side.

Lopez Obrador was one of the last leaders to recognize Biden's victory in the presidential election, as the Mexican president had a strong friendship with Trump.

"I congratulate Joe Biden, 46th president of the United States. The relationship between Brazil and the United States is old, solid and founded on high values, such as the defense of democracy and individual freedoms," tweeted Bolsonaro.

The Brazilian president, who had a friendly relationship with Trump, also said he had sent a letter to Biden explaining his "vision of an excellent future partnership" between the two nations.

Venezuela and Cuba called for Biden to lift the sanctions which Trump had imposed, according to the Associated Press.

Working on peace in the Middle East

In the Middle East, Israeli Prime Minister Benjamin Netanyahu said he was looking forward to strengthening his country's relations with the US and tackling the threats that Iran imposed, noting a "warm, personal friendship" with Biden.

Palestinian President Mahmoud Abbas said that he hoped that the US would have a different approach toward the peace process in the region, urging "a comprehensive and just peace process that fulfills the aspirations of the Palestinian people for freedom and independence.''

Abbas had accused Trump of bias toward Israel after the former US president moved his country's embassy to Jerusalem.

Indian Prime Minister Narendra Modi welcomed Biden's administration, saying he was looking forward to economic cooperation with the US.

"The India-US partnership is based on shared values. We have a substantial and multifaceted bilateral agenda, growing economic engagement and vibrant people to people linkages," Modi said on Twitter.

The Trump administration had focused the US-India bilateral relations on defense agreements, ending India's trade status that allowed the southeast Asian country to enter the US market duty free since 1970s.