The Swedish startup has announced the German automaker will invest heavily in two new battery plants. The factories, located in Sweden and Germany, are intended to compete with Tesla and Asian suppliers. 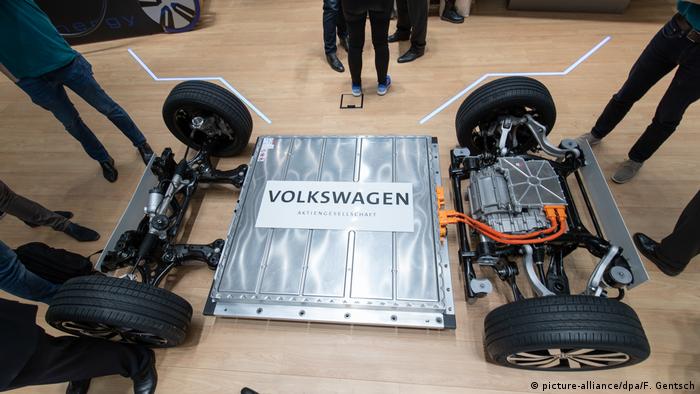 Northvolt, a Swedish car battery maker, announced on Wednesday that it had raised $1 billion (€900 million) in cash to finance the construction of Europe's biggest car battery manufacturing facility.

German automaker Volkswagen (VW) will be one of Northvolt's primary investors, though neither company disclosed how much VW had committed to financing.

The company's Swedish factory, located in northeastern Skelleftea, will be the largest in Europe when it begins production in 2021. Beyond VW, other investors in the Skelleftea factory include the bank Goldman Sachs, German automaker BMW, and the Swedish pension fund AMF.

Northvolt also secured a €350 million loan from the European Investment Bank for the project in May.

The factories are intended to compete with US manufacturer Tesla's Gigafactory in Nevada, and Asian manufacturers gearing up to serve the European market.

'A key moment for Europe'

The battery maker announced, "Today is not only a great milestone for Northvolt, it also marks a key moment for Europe that clearly shows that we are ready to compete in the coming wave of electrification."

The deal will require approval from the Swedish Competition Authority.

VW announced that it would acquire a 20% stake in Northvolt, and one seat on its board of directors.

Nothvolt and VW will also be entering a separate joint venture to build a second battery plant in Salzgitter, Germany. Salzgitter is located in VW's home state of Lower Saxony, which is also a stakeholder in the company.

Construction is slated to begin in 2020, and production to begin in late 2023, or early 2024. VW says it will invest close to €1 billion in the Salzgitter plant.

European countries are keen to invest in the new technology, with German Economy Minister Peter Altmaier promising €1 billion in funds for companies building lithium ion batteries in Germany and Europe, and France promising €700 million toward such endeavors.

Asian manufacturers, who have a leg up on the Europeans technologically, are also looking to capitalize on the coming wave of electromobility, with companies such as China's CATL announcing plans to build a factory in Erfurt, Germany.