As carmakers wrestle for the emerging electric car market, a German company sealed a key deal to mine a massive lithium deposit under a salt flat in Bolivia. The metal is crucial for making car battery cells. 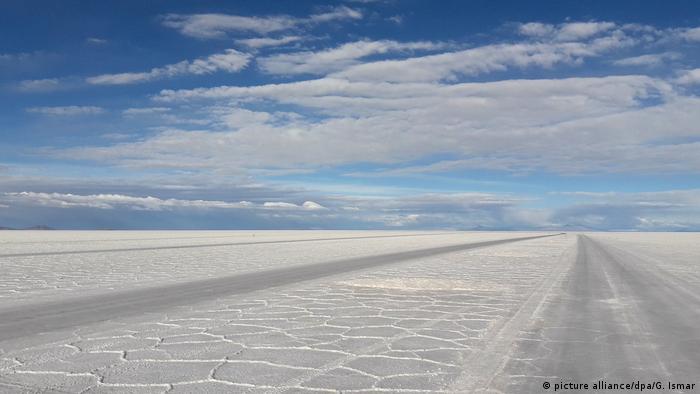 Lithium deposits hidden below Bolivia's Uyuni salt flat are believed to be the largest in the world. On Wednesday, Germany's privately owned ACI Systems agreed to a partnership with Bolivian state company YLB to exploit the element.

Lithium is a key component in producing battery cells for electric cars, and a steady supply of the metal would allow German carmakers to boost their production.

Securing access to lithium would help "avoid falling behind and slipping into dependency," he added.

Read more: How Volkswagen is gearing up to be an electric car leader

The price of a ton of lithium has more than doubled in the last two years to top $13,000 (€11,400) per ton, prompting some experts to dub it "white gold." Asian countries control 88 percent of the world's production of lithium-ion batteries, with China alone claiming over 50 percent, according to 2014 data.

However, accessing lithium deposits in Bolivia and other South American countries could allow Germany to curb its reliance on Asian partners. Last months, Altmeier announced that Berlin would set aside a billion euros  to support EU's battery production.

The new deal would see the German and Bolivian companies build a lithium-hydroxide plant and a factory for electric vehicle batteries in Bolivia. By 2022, the facilities would deliver between 30,000 and 40,000 tons of lithium-hydroxide per year, which is enough to supply lithium batteries to some 800,000 cars annually. Around 85 percent of lithium extracted from Bolivia should be delivered to Germany.

The companies pledged to invest between €300 million and €400 million for the project's initial stages.

However, some environmentalists are concerned over the impact of lithium mining on the Uyuni salt flat, which is a popular tourist destination. YLB's chief Juan Carlos Montenegro says that only 0.4 percent of the site would be affected, amounting to some 40 square kilometers or 15.4 square miles.