This vast expanse of shimmering white may look like snow or ice. It's actually salt — and lots of it. 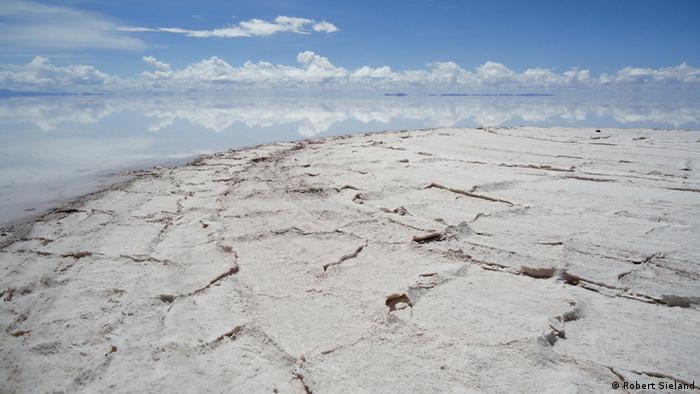 Bolivia's Salar de Uyuni is 3,659 meters (12,000 feet) above sea level. The world's largest salt flat, it's home to 70 percent of the world's lithium reserves, according to the country's government.

Stretching out for more than 8,000 square kilometers (3,100 square miles), Salar was formed after several lakes that had occupied the area over 12,000 years ago, dried up. Salt deposits leached from the surrounding mountains and deposited there.

A visit to Bolivia's salt flats usually involves snapping a picture that plays with the perspective. Think a big person in the foreground about to squish a tiny person in the background with their giant foot - or a tiny person drinking out of a huge bottle of wine. But there's more to the place than that.

Baby flamingos with gray feathers. The animals derive their eventual pink color from feeding on algae in the salt flats

Perhaps surprisingly, this otherworldly and harsh terrain is home to some flora and fauna, such as giant cacti, the Andean fox and horned coot. In early November, Salar becomes the breeding ground for the Chilean, Andean and James's pink flamingos. The animals derive their color from feeding on pink algae in the lakes of the salt flats.

As demand for lithium — used in pharmaceutical products, smartphone and electric car batteries — grows, some environmentalists worry the area could become a target for mining, damaging the fragile ecosystem and affecting tourism.

Do you have a picture of a beautiful landscape that you want to share with readers? If so, you can send it to us using the upload tool on our page, or by emailing us at ecoafrica@dw.com.