How Volkswagen is gearing up to be an electric car leader | Business | Economy and finance news from a German perspective | DW | 16.11.2018 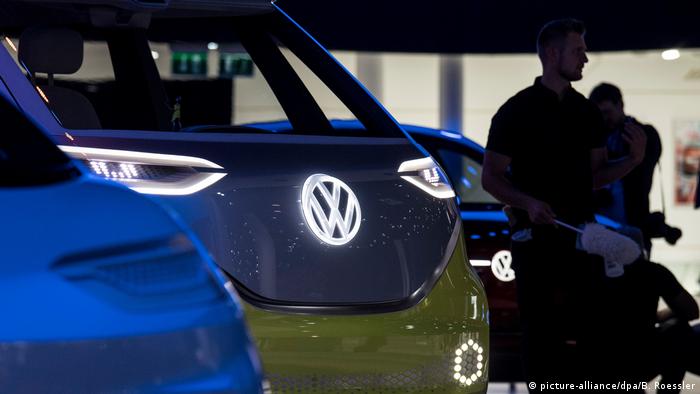 Volkswagen on Friday took a step closer to shaking off the Dieselgate emissions cheating scandal after its supervisory board gave its ambitious electromobility strategy the go-ahead.

Over the next two years, three of its German factories will be retrofitted for the production of electric vehicles (EVs) as the Wolfsburg-headquartered company aims to create the largest production network for EVs in Europe.

VW said on Friday its €44-billion ($50-billion) investment would include the overhaul of its production facilities for at least three sites to help achieve its target to launch 30 pure EVs over the next decade.

It aims to achieve annual unit sales of 2-3 million e-cars by 2025, accounting for up to 25 percent of its total sales.

The supervisory board also saw plans for VW's planned entry-level e-car, which reports suggest will cost just €20,000. Volkswagen's first fully-autonomous vehicles are expected to roll off the production lines by 2021, according to the firm's Together 2025 strategy presentation.

The company also plans to build its competence in battery cell production for EVs amid concerns that Germany is losing out to Asia.

Which plants will be revamped?

VW plans to give the 9,000 employees at its factory in Emden in northwestern Germany the task of building its first sub-€20,000 electric model. Once the plant is overhauled, Emden could churn out 300,000 small and medium-sized EVs per year, the company estimates.

The Passat, which is currently produced in Emden, will be switched to the Skoda Kvasiny plant in the Czech Republic.

VW's largest plant in Zwickau, in eastern Germany, is already being kitted out for electric production. Volkswagen's first electric model to be based on its modular electric toolkit (MEB) will begin production by the end of 2019. Six electric models belonging to three in-house VW brands will be produced at Zwickau from 2021.

The Hanover factory, which employees some 16,000 workers, is slated to produce electric-Transporter vans from 2022. The site will also make around 100,000 ID Buzz vans per year, a 21st century version of the iconic Type 2 campervan. Other EVs are expected to be added, and the plant will maintain production of some combustion-engine vehicles.

Rumored to be a five-door compact crossover loosely based on the Polo, the lower-cost model will cost less than €20,000.

Known internally as "MEB Entry," the budget-conscious ID model will allow VW to compete with US rival Tesla, which also aims to give its Model 3 car a mass-market makeover.

The Model 3, which will be available in Germany from next year will cost €31,000. VW's electric equivalent won't be ready for a further four years, according to German media.

After the German government, this week, gave its backing for the domestic production of electric battery cells, Volkswagen has confirmed it is holding talks with South Korean battery manufacturer SKI Innovation for a possible joint-venture in Germany.

Although Germany has allowed Asian producers to take a lead in battery-cell production, auto industry insiders believe it is vital that home-grown manufacturing is ramped up.

VW, this week, signed a major deal with SKI to supply battery cells for the EV fleet, but the pair could also build new factories in Europe and North America.

Volkswagen says its workers have been guaranteed their jobs until 2028, but because electromobility has fewer production steps, a smaller staff would be required in the long term. The company said it planned to decrease the number of workers through a partial retirement scheme, and natural attrition.

Where possible, temporary workers that are no longer required at Hanover, Emden or Zwickau will be offered contracts at plants belonging to VW's other brands.

Volkswagen reportedly wants to start producing some 200,000 electric vehicles at the two sites beginning in 2022. The move is part of the automaker's broader strategy to move to produce cleaner cars. (14.11.2018)

German carmakers didn't pioneer the new era of electric cars, but now they're making massive investments in EV model development and production. By 2025 they may surpass their rivals for global e-car market share. (13.07.2018)