Russia's Vladimir Putin and Hungary's Viktor Orban are to meet on Tuesday. They both are nationalistic strongmen with a dislike for western liberalism. But the ties between the two are both deeper and more complicated. 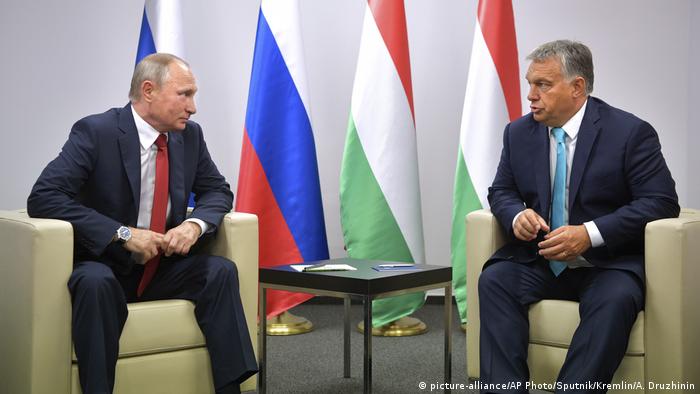 Orban and Putin in Budapest

"To be considered a good European, you have to disparage Putin like he is the devil," Hungarian Prime Minister Viktor Orban told the Italian La Republica in January 2018.

According to Orban, who boasts a close relationship with the Russian president, the EU officials depict Vladimir Putin "with hooves and horns," and ignore the fact that he "rules a great and ancient empire."

"In the past, we Hungarians have suffered a lot under Russia," he told the paper. "Nevertheless, it needs to be recognized that Putin has made his country great again and that Russia is once again a player on the world stage."

The same EU officials who dislike Putin are usually less than thrilled by Orban himself. Since returning to power in 2010, the Hungarian strongman has transformed his country in a way reminiscent of Russia, claiming control of all major media outlets and forming a clique of loyal oligarchs around his conservative Fidesz party. Internationally, Orban has strongly criticized EU sanctions against Russia, but stopped short of vetoing them in Brussels.

Read more: Orbanism is sweeping across the continent

Even more jarringly for the EU diplomats, Orban repeatedly broke Russia's diplomatic isolation by welcoming Putin in Budapest after the 2014 annexation of Crimea.

And yet, despite these friendly signals towards Moscow, Hungary has stayed a committed member of NATO and even joined a UK-led diplomatic offensive by expelling Russian embassy officials in the wake of the Sergei Skripal poisoning.

This discrepancy might stem from the fact that Putin and Orban, despite their similarities, started their careers from the opposite sides of fence during the Cold War. While Putin worked for the KGB in Germany's Dresden, Orban was a student dissident who made his name by demanding the withdrawal of Soviet troops in a fiery 1989 speech in Budapest.

Orban helped found the Fidesz party during his time at the university, backed by George Soros, the same Hungarian-American billionaire who the party came to portray as their main ideological opponent decades later. In 1989, Orban received a scholarship from the Soros foundation to spend six months at the Oxford University.

In July 1998, just weeks before Vladimir Putin was appointed head of the FSB intelligence agency, Orban claimed the office of prime minister in Hungary. However, while Putin took the reins of the Kremlin in 2000 and managed to hold on to power until present day, Orban was pushed out by Hungary's Socialist Party in 2002. While in opposition, Orban criticized the Socialists' support for Russia's South Stream gas project as "treasonous."

Orban's course on Russia changed sharply after he reclaimed the seat in 2010. In 2011, Budapest declared its "Eastern Opening" strategy to find new markets for its products in Russia, China, Turkey, and other countries. Orban also became a proponent of the South Stream pipeline and angrily accused Brussels of sabotaging the project when it was scrapped in 2014.

However, the South Stream dispute served only as a sideshow to a much larger feud between Budapest and Brussels. In January 2014, Budapest awarded a €12.5 billion ($14.5 billion) project to renovate Hungary's sole nuclear power plant, Paks, to Russia's state corporation Rosatom. Russia is also set to lend €10 billion to implement the project. The EU has blocked the project for several years, arguing that it was awarded without an international tender and that the Kremlin's Vnesheconombank was under sanctions, but Brussels eventually relented in early 2017.

Currently, Hungary's economy is deeply integrated in the EU bloc and over 80 percent of its total exports go into other EU countries. However, the central European state is strongly dependent on Moscow when it comes to energy, importing around 57 percent of its natural gas needs and 89 percent of its oil from Russia.

Ideologically, Orban listed Russia among positive examples of successful "illiberal" societies while launching his theory of "illiberal democracy" in 2014. Similar to Putin, Orban offered traditional, "Christian" values in contrast to modern liberalism and focused heavily on restoring national pride in his country. Both Russia and Hungary claim to be under attack by sinister forces from the West and both have moved against foreign-funded activists.

Do these parallels mean the two men are also personal friends? Not according to Orban, who told Politico in 2015 that Putin had "no personal feelings" for fellow world leaders. While western leaders tend to form personal relationships and address each other by first names, this would be unthinkable for the Russians, Orban added.

"Is there anybody who has seen the personality of Putin?" Orban asked in an interview.

"So therefore, the personal issue does not play a role at all — neither in my mind, nor the mind of Putin."