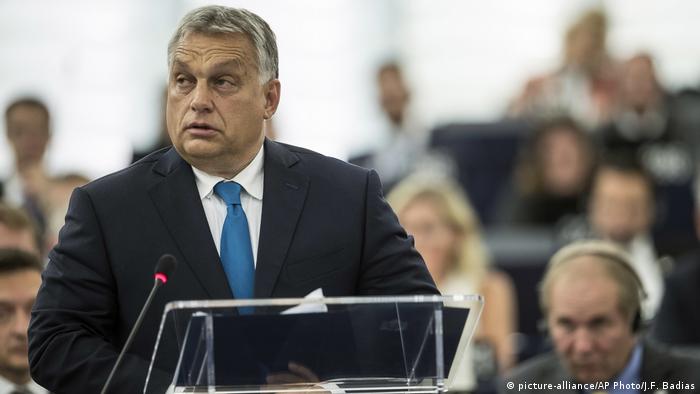 Members of the European Parliament voted to censure the Hungarian government on Wednesday for eroding democracy and failing to uphold fundamental European Union values.

The measure to trigger Article 7 sanctions procedures garnered the necessary majority needed to pass, with 448 voting in favor of the motion, 197 against and 48 abstentions. The move means that Hungarian Prime Minister Viktor Orban's government could eventually lose its EU voting rights.

Prior to the vote, it was unclear how many members of the conservative European People's Party (EPP) bloc, the largest political group in the European Parliament, would support the measure. Although Orban's Fidesz party is part of the EPP, several of the lawmakers voted against their Hungarian allies.

Shortly after the vote, Hungarian Foreign Minister Peter Szijjarto slammed the decision as a form of "petty revenge" by "pro-immigration politicians" against Budapest for its tough immigration policies.

Budapest is also looking into legal ways to challenge the measure. Szijjarto argued that the abstaining votes should have been included in the count as well, which would have changed the outcome.

Juncker: 'I've given up' on reasoning with Orban

European Commission President Jean-Claude Juncker, who gave a speech in parliament before the vote, told DW that he had "given up" on trying to talk with Orban about his hardline policies, saying "there are big differences" between the two of them.

"I constantly explain to Viktor Orban that this radical rhetoric he's directing towards Europe helps neither him nor Europe," he told DW.

What the vote means: The measure does not immediately penalize Hungary, but it opens the door for sanctions to be imposed. Wednesday's vote also means that a formal warning will be sent to Hungary for violating the EU's values.

What is Article 7? Article 7 of the Lisbon Treaty opens a path for sanctions against a member state and a temporary loss of EU Council voting rights. The mechanism is triggered when one of the bloc's members violates the vales of "human dignity, freedom, democracy, equality, the rule of law and respect for human rights, including the rights of persons belonging to minorities."

EU-Hungary tensions: Speaking to European lawmakers on Tuesday, Orban said the EU was targeting Hungary for refusing to take in refugees under an EU-wide resettlement quota scheme. Although Brussels and Budapest have repeatedly clashed over immigration and refugee policy, the vote on Wednesday addressed broader concerns with the state of democracy and rule of law in Hungary. A report by MEP Judith Sargentini, which triggered the Article 7 vote, found that Orban's attacks on independent media, academics, the judiciary, migrants and refugees and the rights of minorities pose a "systemic threat" to the EU's fundamental principles.

Historic vote: The vote was the first time that the EU Parliament considered launching the Article 7 sanctions process against a member state. The European Commission, the executive arm of the EU, launched Article 7 proceedings against Poland last year over its judicial reforms.

What happens next: The motion will now pass to the leaders of the EU's 28 member states for approval. However, a unanimous vote is required to suspend Hungary's voting rights and launch sanctions — a move that is likely to be blocked by Poland.