Acting President Nicolas Maduro has praised "loyal and obedient" troops for stopping an uprising orchestrated by the "coup-mongering far-right." Opposition leader Juan Guaido has called for a general strike on Thursday. 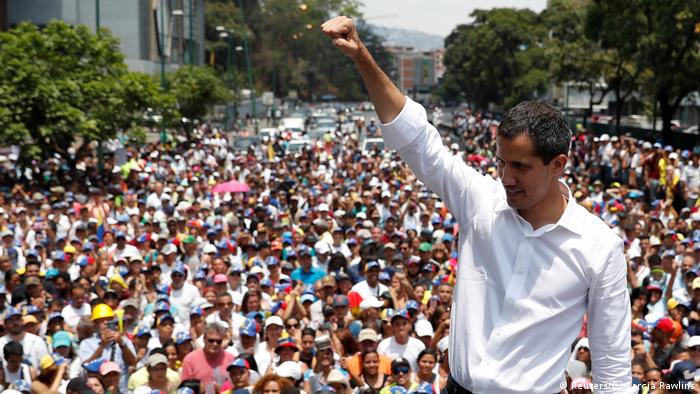 The appearance came after clashes between protesters and armed forces that began early Tuesday after Guaido urged supporters to begin a final push to eject Maduro from office. The opposition leader has called for a general strike across the country on Thursday as a sign of the strength against Maduro.

Guaido told DW on Wednesday that the "military no longer backs Maduro," yet, despite small numbers of defections from the armed forces, there has been no mass exodus.

There was fighting between factions near Carlota air base, where Guaido made his declaration of the "final phase" of Maduro's ouster. Demonstrators were reportedly trying to dismantle the barriers to the base. Local rights groups said one protester had been killed in the unrest; at least 27 people have been injured.

Late Wednesday, it appeared most of the protests in the capital, Caracas, had broken up as the National Guard fired tear gas canisters at the last remaining groups of demonstrators.

Both Maduro and Guaido had held opposing rallies around Caracas earlier in the day, with both men accusing one another of staging coups.

Maduro said Guaido's actions "will not go unpunished." For his part, Guaido warned: "The regime will try to increase the repression, it will try to persecute me, to stage a coup d'etat."

In one, Maduro praised changes to the country's constitution, writing: "Two years have passed since the blessed day that we summoned the original power, that is intransferable and resides with the Venezuelan people, to elect the plenipotentiary National Constituent Assembly to bring peace and tranquility to the republic. Long live the power of the Constituent!"

Meanwhile, the other major players in the crisis, the United States and Russia, also exchanged accusations.

The US, which Maduro claims is behind the current crisis, accused Russia of "destabilizing" the situation, with Secretary of State Mike Pompeo alleging that Moscow had talked Maduro out of fleeing the country.

Russian Foreign Minister Sergey Lavrov, speaking with Pompeo by phone, accused the US of committing a "flagrant violation of international law" by intervening, calling US interference "destructive."

In his television address, Maduro claimed Guaido had initiated the current uprising to create a pretext for a US military intervention.

Although Pompeo said the US wants a peaceful transfer of power, he warned that President Donald Trump was prepared to do more.

"The president has been crystal clear and incredibly consistent. Military action is possible. If that's what's required, that's what the United States will do," he told Fox Business Network.