Venezuela's self-proclaimed interim president, Juan Guaido, says the army now backs a change of government. Guaido told DW that the military is no longer on the side of acting President Nicolas Maduro. 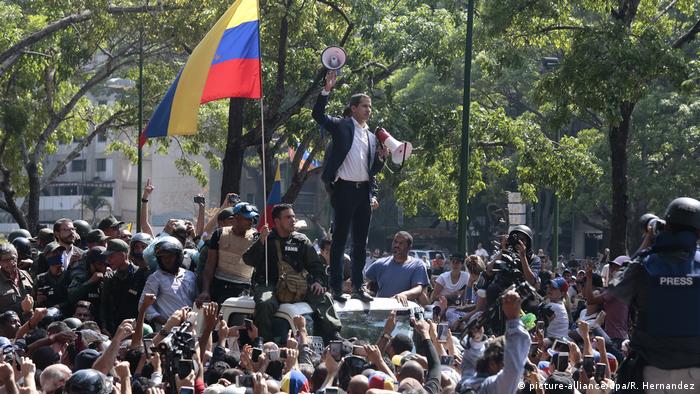 DW: You say this is the beginning of the end of Nicolas Maduro's rule. Which military units now support you?

Juan Guaido: The armed forces no longer back Nicolas Maduro. They are on our side. They are backing the constitution and are for a change of government. The situation we have in Venezuela is a usurpation. There's been a lot of persecution within the military — not only by Venezuelan but also by the Cuban secret services. It's obvious that the majority of the population, as well as the international community and the armed forces, no longer support Maduro.

Maduro, whose 2018 reelection has been called undemocratic by the opposition, says dissidents are staging a coup.

It is obvious that Maduro's government is unlawfully usurping political offices; it's this government that since 2018 has flouted the constitutional state and the constitution, that doesn't hold free and fair elections and abuses its power. The armed forces have taken an important step by giving us their support.

With factions of the military supporting different ends, is there a risk of bloodshed?

We are proceeding peacefully and within the framework of the constitution — we've always said this. And we will continue in this way. The ones who have exercised violence are armed paramilitaries, the so-called colectivos. They're backed by the government. We, and the Venezuelan people who are taking to the streets and protesting, have maintained our nonviolent approach. 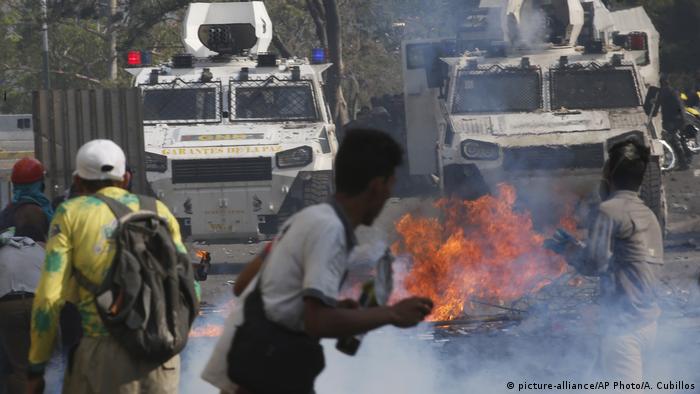 Some military factions still demonstrate their support for President Maduro, however

What support are you calling for from the international community? On Monday, the Lima Group of 14 countries from the Americas, which was established in 2017 in response to the standoff in Venezuela, convened an emergency meeting to discuss the situation.

We're calling for official recognition, which many countries have already given us. And we're calling for the appointment of an interim government and the holding of free elections. The world needs to know that Maduro now no longer has the support of the military, although he's spreading fear, rebellion and insecurity. Whatever happens, we will keep going.

Read more: Coup or uprising? It depends on whom you support

On Monday, we saw you with the Venezuelan opposition leader Leopoldo Lopez. How was it possible to secure Lopez's release?

We passed an amnesty law. And the armed forces that were holding him in prison withdrew.

Do you think you will succeed at putting an end to Maduro's rule in Venezuela?

As long as the people keep taking to the streets and we have the support of the military and the international community, I have no doubt.