US election: Merkel says Germany will stand 'side by side' with US on world issues

In her first extended remarks about the outcome of the US election, Chancellor Angela Merkel has outlined how Germany hopes to move forward with projected presidential winner Joe Biden in the White House. 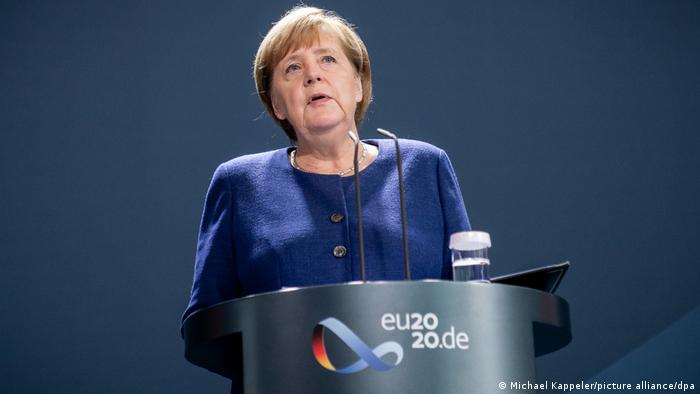 Merkel's speech on Monday marks the chancellor's first extended reaction to the results of the US election after she offered her congratulations to President-elect Biden and Vice President-elect Kamala Harris this weekend.

What are the key takeaways?

DW's chief political correspondent Melinda Crane said Merkel's speech was a "resounding affirmation of what she hopes will be possible with this new administration."

"The chancellor tends to be very measured and restrained, but that was a downright emotional speech [particularly] in the part where she talked about the treasure of trans-Atlantic relations," she said.

By starting off her speech by remembering the atrocities of Nazi Germany and the rise and fall of the Berlin Wall, Crane noted the chancellor "linked those examples of tyranny to the healing role that America had played" in Germany.

In a rather "personal" touch from the chancellor, Merkel also dedicated a significant portion of her remarks to congratulating Kamala Harris, who would be the first woman and first Black person and person of Indian heritage to hold the role of US vice president.

Read more: US election: German-US relationship hangs in the balance

What is the state of US-German relations?

Relations between Germany and the United States became strained over the four years of Donald Trump's presidency.

Trump repeatedly criticized Germany over its defense spending, complaining that Berlin has failed to meet the NATO spending target of 2% of economic output.

In a move largely seen as punishment for Germany's defense spending, Trump ordered the withdrawal of thousands of US troops from bases across the country. It remains to be seen whether Biden will reverse the move.

Merkel and other German leaders are hoping for better communication channels and increased cooperation with Washington under Biden.

Although Biden has pledged to rebuild bilateral bridges in Europe that were broken or burned under Trump, some sticking points are likely to remain.

Nord Stream 2, the controversial gas pipeline project linking Russia and Germany, will continue to be a sore subject. Like Trump, Biden is also expected to oppose the pipeline, adding to the mounting pressure on Merkel to drop the project.

How have other German officials reacted?

Biden's win also presents an opportunity for reviving the Iran nuclear deal, which the US pulled out of in 2018 under Trump.  "We need to come back together on this," Maas told public radio Deutschlandfunk.

Altmaier told Deutschlandfunk that under Biden, there's a "chance that there are no further escalations in tarrifs."

Biden pledges to restore US global cooperation and leadership — but can he?

The president-elect has consistently vowed to turn away from unilateralism. But to truly restore US leadership he will have to win back the trust of alienated allies and hold adversaries to account.

US election is an 'urgent warning' for Germany, says finance minister

The US election has laid bare the deep divisions across the country — serving as a lesson and a warning for Germany, cautioned Finance Minister Olaf Scholz.