Chancellor Angela Merkel has said she is looking forward to working with Joe Biden, calling the trans-Atlantic friendship "irreplaceable." Other European leaders have also congratulated the Democratic president-elect. 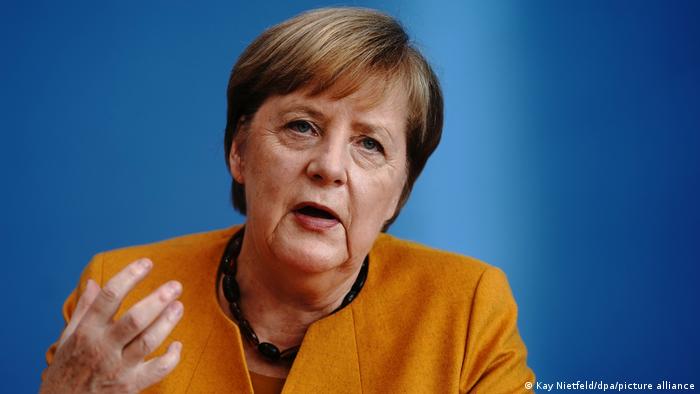 "Congratulations! The American people have made their decision," Merkel said in a statement.

"Joe Biden will be the 46th President of the United States of America. I sincerely wish him the best of luck and every success and I would also like to congratulate Kamala Harris, the first female vice president-elect in the history of your country."

"I look forward to working with President Biden. Our trans-Atlantic friendship is indispensable if we are to deal with the major challenges of our time," she said.

If the poll projections are confirmed, Harris would become the first female, first Black, and first South Asian vice president-elect in the history of the United States.

German Foreign Minister Heiko Maas said that Germany is looking forward to working with the next administration, and hopes to see renewed cooperation.

"It's good that there are finally clear figures," Maas tweeted. "We look forward to working with the next US government. We want to invest in our cooperation for a new trans-Atlantic beginning, a new deal."

Maas had earlier called for trust in the US democratic process, following Trump's controversial claims of voter and election fraud. Several German politicians have touted a Biden presidency as the key to repairing troubled relations between Berlin and Washington.

Maas: 'We are looking forward to working together with him'

German Vice Chancellor Olaf Scholz called Biden's election a "new and exciting chapter" between the two countries, touting relations with the US as Europe's "most important" partner.

"Congratulations, Mr. President-elect @JoeBiden . Now is the chance to open a new and exciting chapter in trans-Atlantic relations. The USA remains Europe's most important and closest partner. There is much to do. Good cooperation! #EveryVoteCounts," he tweeted.

Read more: Biden to become next US president — live updates

The president of the German Bundestag, Wolfgang Schäuble, said he hoped a Biden presidency would unite the US.

"He may not be as charismatic as Obama, but I have a good feeling about Biden as president," Schäuble told the Bild am Sontag newspaper.

He added that no one individual can solve all of the problems in the US, but that he had hope "Biden will be a president for all Americans, and reduce the division in the country … and that with him the US can once again make its tremendously important contribution to our community of values."

NATO chief Jens Stoltenberg described Biden as a "strong supporter of our Alliance," and said he looked forward to working with the Democrat.

"A strong NATO is good for both North America and Europe," he said, adding that "US leadership is as important as ever in an unpredictable world.''

Trump has often been critical of the military alliance and has pressed NATO members, particularly Germany, to boost their defense spending. During his 2016 presidential campaign, Trump repeatedly threatened to pull the US out of NATO.

Peter Beyer, the German government's trans-Atlantic coordinator, told DW that Biden's win was being greeted with "a big sigh of relief around the globe."

"In Germany, Donald Trump was extremely unpopular and that has a negative effect on how the United Strates as a whole are perceived so I hope for the better now," he said.

British Prime Minister Boris Johnson also offered his congratulations, saying that he looks forward to working with the newly elected pair on issues such as climate change and trade, and praising Kamala Harris' "historic achievement."

"The US is our most important ally and I look forward to working closely together on our shared priorities, from climate change to trade and security," Johnson said in a statement.

French President Emmanuel Macron warned that "a lot of work" to be done between the two countries.

"The Americans have chosen their President. Congratulations @JoeBiden and @KamalaHarris! We have a lot to do to overcome today’s challenges. Let's work together!" Macron tweeted.

"Ukraine is optimistic about the future of the strategic partnership with the United States, and we have always collaborated on security, trade, investment, democracy, fight against corruption. Our friendship becomes only stronger!" Zelenskiy tweeted.

A phone call from Trump to Zelenskiy, in which Trump asked the leader to investigate Biden and the Democratic National Committee, spurred a whistleblower complaint that resulted in an impeachment probe last year. Trump was later acquitted by the Republican-led Senate.

Greek Prime Minister, Kyriakos Mitsotakis tweeted: "Congratulations to US President-Elect @JoeBiden. Joe Biden has been a true friend of Greece and I'm certain that under his presidency the relationship between our countries will grow even stronger."

"Congratulations to the American people and institutions for an outstanding turnout of democratic vitality," tweeted Italian Prime Minister Giuseppe Conte. "We are ready to work with the President-elect @JoeBiden to make the transatlantic relationship stronger. The US can count on Italy as a solid Ally and a strategic partner."

"The American people have chosen the 46th President of the United States," said Spanish Prime Minister Pedro Sanchez. "Congratulations @JoeBiden and @KamalaHarris. We wish you good luck and all the best. We are looking forward to cooperating with you to tackle the challenges ahead of us."

Following a nail-biter election and days of uncertainty, US media organizations including the Associated Press declared Biden and his running mate Harris the projected winners of the US presidential election.

Read more: US election: Will Trump respect tradition with a concession speech?