Will Donald Trump respect tradition with a concession speech? Concession of defeat has been part of the peaceful transfer of power in the US since 1796, the year that saw the first election contested between parties, with Federalist John Adams losing to Democratic-Republican Thomas Jefferson.

The tradition of the public concession was established by Democrat William Jennings Bryan in 1896. After losing to Republican William McKinley, Bryan sent a congratulatory telegram reading: "I hasten to extend my congratulations. We have submitted the issue to the American people and their will is law."

Past statements by Republican President Donald Trump — a litigious man who never admits defeat — decrying the 2020 US presidential election as "a fraud" and vowing to launch an all-out legal assault to remain in power suggest he may not continue the tradition of publicly conceding defeat in the peaceful transfer of power after failing to win reelection.

Read more: Could election challenges by Trump and Republicans succeed?

An obligation of courtesy

There are no legal or constitutional requirements obliging a candidate (or a sitting president) to deliver a concession speech; rather, it is a custom of courtesy. As this is also the moment a candidate tells supporters the other side has won and the campaign is over, concession speeches are a key element of the dramatic political theater that is part and parcel of a US presidential election.

Since William Jennings Bryan sent his 1896 telegram, technology has shaped the role of this ritual within the drama. Film newsreels and radio addresses made losing candidates' words known to an ever-broadening public, but no medium brought it to the fore and shaped it as part of a dramatic script more than television.

Television has been the dominant media for making these statements public since 1952, when Democrat Adlai Stevenson gave a concession speech after losing to Republican Dwight D. Eisenhower.

The call and the press conference

The public concession is usually preceded by a private telephone call between the candidates. In 2016, Democrat Hillary Clinton spoke with Donald Trump on election night before publicly telling supporters the next day: "Donald Trump is going to be our president. We owe him an open mind and the chance to lead. Our constitutional democracy enshrines the peaceful transfer of power. We don't just respect that. We cherish it."

In 2000, the script hit a snag. With networks calling the race for Republican George W. Bush, Democrat Al Gore phoned on election night to concede the race and offer congratulations. Then came the controversy over Florida, where the vote was deemed too close to call, triggering a recount under state law. Within an hour Gore was on the phone with Bush in a heated conversation in which the Democrat retracted his concession. 'I'm with you, Mr. President, and God bless you'

However, on December 13, a day after a United States Supreme Court decision on the Florida recount made Bush president, Gore stood before journalists and said: "Just moments ago, I spoke with George W. Bush and congratulated him on becoming the 43rd president of the United States. And I promised him that I wouldn't call him back this time."

Though he vehemently disagreed with the Supreme Court's decision, Gore told those watching: "For the sake of our unity as a people and the strength of our democracy, I offer my concession."

He also cited Democratic Senator Stephen Douglas' 1860 concession to Republican Abraham Lincoln in his remarks, quoting: "Partisan feeling must yield to patriotism. I'm with you, Mr. President, and God bless you." 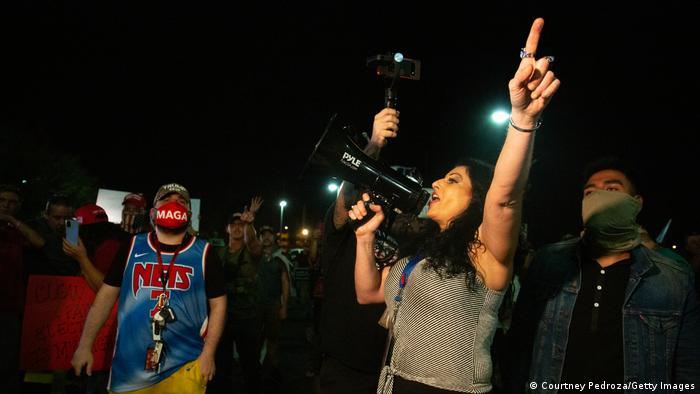 Many Trump supporters may also prove unwilling to concede defeat

Unity and the glory of American democracy, mostly

Tradition (not law) demands that a losing candidate articulate four main themes in a concession speech: an acknowledgment of defeat, a call for unity,  a celebration of democracy and a vow to continue the fight. Grace and earnestness are important in this regard in that a candidate affirms to the country and his or her supporters that the hard-fought electoral battle is over and that Americans should seek to bridge divides and come together for the greater good of the country.

But not everyone steps away with grace. Trump's Republican predecessor Richard Nixon gave a notoriously begrudging concession speech after losing the 1962 California gubernatorial race to Democrat Pat Brown, exiting the press conference with the words: "You won't have Nixon to kick around anymore, because, gentlemen, this is my last press conference." Nixon proved that to concede was not to give up and went on to kick and be kicked regularly after that, before ultimately resigning in ignominy in 1974.

The partisan fervor and deep divide that has marked the 2020 presidential election would seem to call for words articulating a heartfelt plea for unity in a divided nation. Democrat Joe Biden has consistently said he would respect the will of the people in a free and fair election, while calling for calm and unity among all Americans.

Donald Trump's steadfast refusal to promise to respect the results of an election if he loses — both in 2016 and 2020 — and the emotion he stirs in his base while maligning the election as a fraud do not necessarily suggest he will make a gracious exit. But perhaps we will at least get a concession tweet instead — if his Twitter account isn't blocked.

Biden to become next US president — live updates

Democratic candidate Joe Biden is now set to defeat Donald Trump after projections showed Biden winning over 270 electoral votes. However, the Trump team says the election is "far from over." Follow DW for the latest.