DW Fact Check: Wild claims about the US vote count

As states continue to count ballots, DW Fact Check helps break down what is true and false when it comes to how ballots are counted and claims of fraud in the US election.

Fact-check: The truth on burned votes

With counting still going on in many states, people are understandably getting jittery about the results of the US election.

Unfounded accusations of widespread fraud and deceitful vote counting have spread across social media. With cherry-picked information or manufactured videos, these claims have often painted an inaccurate picture.

DW Fact Check has looked into a few of the most viral claims.

The video went viral on social media with more than a million views and was then deleted and reposted again and again.

Tens of thousands of accounts retweeted the video, with many calling it proof of what several Republicans — including the president — had falsely claimed for weeks: Mail-in ballots lead to fraud and are more susceptible to tampering. But the video shows just sample ballots from Virginia Beach, as the city confirmed on its website.

City officials pointed out that the burned sample ballots didn't have any bar code on them, which can be found on actual ballots.

The video, according to officials, does not show valid votes for Trump being destroyed.

"Wisconsin took a break, and when they returned, Biden coincidentally came back ahead by 100k...this is how it happens people."

This and similar claims in other states have been made about batches of primarily mail-in votes being one-sided in favor of former Vice President Joe Biden. Throughout the election, Trump and other Republicans cast doubt on mail-in ballots and concerns over the coronavirus. However, for vulnerable populations and those concerned about COVID-19's risk to their family's health, mail-in ballots may have been the safest way to vote.

Many, including DW, predicted ahead of the election that initial vote counts on Election Day would give a lead for Trump — but later the vote tallies would swing back in Biden's favor once valid mail-in votes were counted. Pew Research Center's survey ahead of the election indicated that 25% of Trump supporters planned to vote by absentee or mail-in ballot, whereas 51% of Biden supporters planned to vote this way. Moreover, some states do not allow mail-in ballots to be counted until Election Day, and this includes the key battleground states of Wisconsin, Georgia, Nevada and Pennsylvania. And because there is an unprecedented avalanche of mail-in votes — in large part due to the pandemic — counting these votes takes more time than usual. 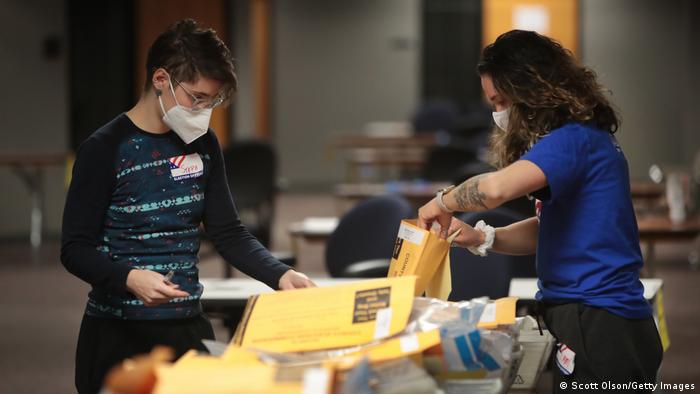 This is a factor that played out in Wisconsin and in other states. According to reporting by the Green Bay Press-Gazette, Trump had a lead of more than 100,000 votes before the city of Milwaukee reported its absentee vote results, but once Milwaukee reported those results, Biden gained a lead of about 8,000 votes statewide. His lead then widened to 20,000 when the cities of Green Bay and Kenosha reported their results.

Some counties in this state count in-person and absentee votes together, so all their results are released at once. Others, such as  Milwaukee County, which includes the state's most-populous city, tally their absentee ballots in a central location and the totals aren't released until the last is tabulated. This is what accounted for an increase in votes for Biden.

To the first part of the claim, Wisconsin election officials did not take a break. Vote counting continued through the night there.

Meagan Wolfe, Wisconsin's chief election official, said in a press conference on November 4: "Our municipal and county clerks have worked tirelessly throughout the night to make sure that every valid ballot has been counted and reported accurately."

The president and his inner circle have repeatedly spoken about allegedly illegal votes being counted. Trump has also demanded a stop to vote counting. Early Friday morning, the Trump campaign sent an email, seen by DW, to supporters claiming: "Votes cannot be cast after the Polls are closed!"

To be clear, people aren't allowed to cast a vote after polls close on November 3. However, in many US states it is legal for mail-in or absentee ballots to arrive after election day — as long as they were postmarked by November 3 or the day before. This year, 23 states accepted mail-in ballots after November 3.

This applies to Nevada, Pennsylvania and North Carolina — three states that are still heavily contested. Have a look at our infographic for details on the states that accept ballots after election day. 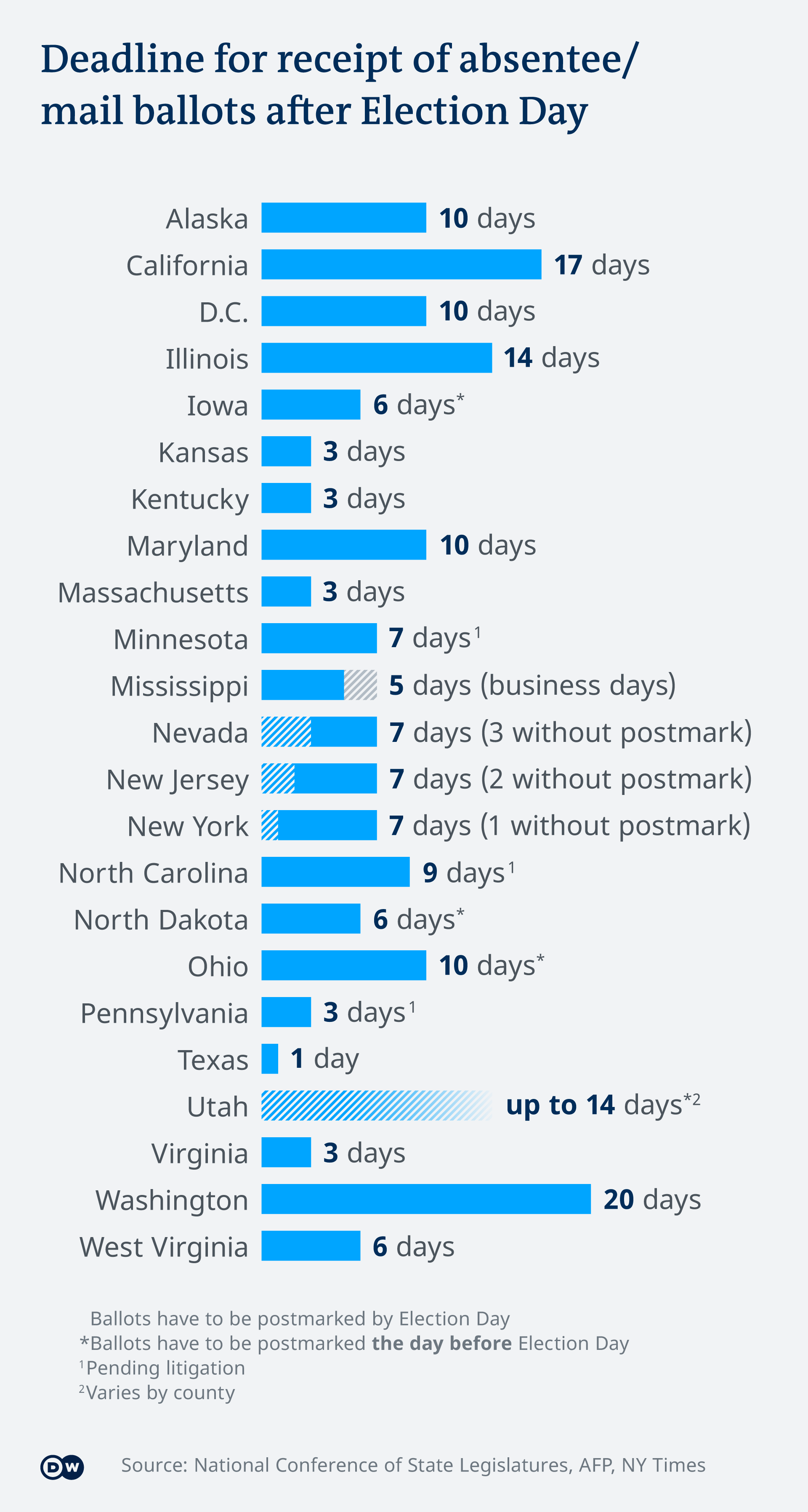 A viral video shows a man rolling a wagon into a vote-tallying center in Detroit, which people on social media later claimed had contained 130,000 votes in a black box.

This is false. The man in the video was a local TV videographer wheeling in equipment to cover the night of vote counting. The station WXYZ debunked the claim by showing the suspicious red wagon and the black box of camera material.

The article claiming voter fraud on the conservative site Texas Scorecard went viral — but has since been taken down.

In an interview on a conservative YouTube show on November 4, Kellye SoRelle, a lawyer based in Texas who recorded the video, suggested the box could contain invalid ballots. But she stopped short of confirming it was what she saw, saying the box being transferred was "very similar to the box we had seen and been watching and monitoring."

"The concern was just a security concern," SoRelle said. "We don't really know what was going on, with or what items they were bringing in or who was going in."

When asked if it is possible that people could be walking in with fake ballots, she replies: "Absolutely. This is a battleground state. We came up here to Michigan to help Trump because this is a state that's under fire."

The update from WXYZ, however, indicates that the fraud suggestion is false.

Susanne Baldsiefen contributed to this report.