US election: When do results come? What happens when there is no winner on election night? | Americas | North and South American news impacting on Europe | DW | 02.11.2020

US election: When do results come? What happens when there is no winner on election night?

With increased mail-in voting and deep political division, the US election results are taking longer than usual to confirm. DW explains the scenarios that follow Election Day. US election results usually trickle in on election night, followed by a concession speech from the losing candidate in the early hours of the morning.

But this year, with record numbers of Americans voting by mail due to concerns over COVID-19, ballots are taking longer to tally, potentially dragging election night into a days — or even weekslong process after November 3. Add to this, doubts that some Republicans have cast on the credibility of voting by mail and President Donald Trump's claim early Wednesday of "major fraud" and the aftermath of Tuesday's election could be chaotic.

So here's what you should know about the ways the 2020 vote could play out.

Amid the coronavirus pandemic, nearly 60 million Americans voted by mail ahead of Election Day itself, according to the US Elections Project. 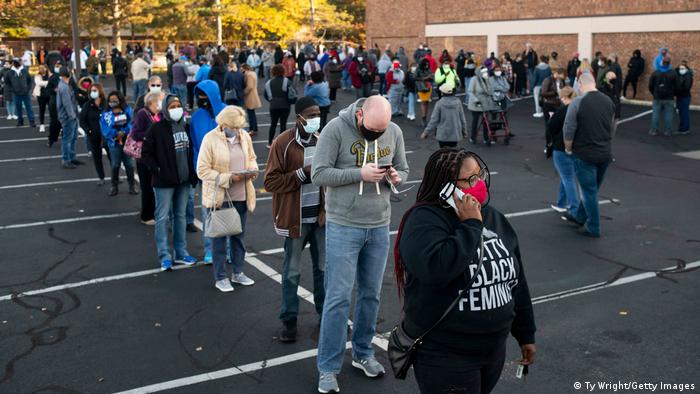 In Colorado, Oregon, Washington, Utah and Hawaii, this turned out to not be an issue, as voters and election officials are used to dealing with mail-in voting. Other states that have made voting by mail easier for citizens since March are taking longer to count ballots, especially those that can't open mailed ballots until Election Day, including the battleground states of Wisconsin and Pennsylvania.

During the primaries that occurred after March 17, a Washington Post analysis found it took states an average of 4 days to report nearly complete results.

Read more: Manning the polls: How the coronavirus has changed the face of US democracy

"One thing I would say about this country's election managers, the administrators, is that they are a very, very dedicated lot," said Edie Goldenberg, a professor of public policy and political science at the University of Michigan. "They've worked very hard to prepare for this election. So, I think that the difficulties that we certainly saw in a number of primaries, many of those have been addressed."

In Tuesday's general election, states are processing many more ballots than in the primaries. Some states, including crucial swing states like Pennsylvania and North Carolina, extended their deadlines to accept ballots postmarked by Election Day.

Even for states that do require ballots be received by Election Day, it could take a week to count them all if the race is close, as was the case in Arizona in 2018. 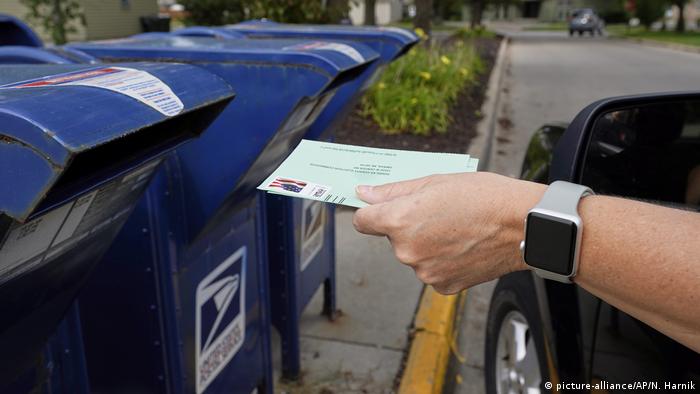 In the run-up to the 2020 election, President Trump and other Republicans questioned the credibility of mail-in voting, despite cases of fraud with mail-in voting being very rare — as is voting fraud in general — according to an analysis by the New York Times.

The president himself votes by mail, including in the most recent midterm elections and the Florida primary this year.

The president is "concerned about particular states that automatically mail out ballots to every registered voter," Acting Deputy Secretary for the Department of Homeland Security Ken Cuccinelli told DW's Conflict Zone.

According to survey data published ahead of the election, six in 10 Americans planning to vote wanted to do so in person (80% of Republicans and 40% of Democrats), while the other four in 10 intended to cast their ballots by mail, the Brookings Institution reported.

The divergence in how Democrats and Republicans are voting this year means initially reported results from in-person voting often skew Republican, while later results from mail-in ballots often swing Democratic.

"If it's lopsided enough, then oftentimes what we see is that the media call the election, and this year that would be dangerous in a number of states," said Goldenberg.

Over 400 legal cases about the election were filed before November 3 and both campaigns amassed legal teams leading up to the vote.

Most lawsuits about how the election is administered will be decided in state courts, according to Bruce Ackerman, a constitutional scholar and law professor at Yale Law School.

He and other experts believe it's unlikely that we will see a repeat of the 2000 Bush v. Gore Supreme Court case that decided the outcome of that presidential election, despite President Trump's statements to the contrary.

"The fallout of Bush against Gore was against the Supreme Court of the United States," Ackerman told DW. "Without any precedent, it shocked legal scholars from across the spectrum."

What Ackerman says is more likely is that Congress would choose the winner.

If no candidate secures a majority of electoral votes due to a tie or unresolved disputes over states' votes, the newly elected House of Representatives would then decide the president as late as January 6, as stipulated in the US Constitution. The last time this happened was in the 19th century.

Further complicating matters is if states haven't selected their electors by December 8 — perhaps due to still-pending lawsuits — Congress doesn't necessarily have to accept their state's results.

If no president is decided upon by inauguration day on January 20, the next in presidential succession becomes the acting president, which could be the vice president-elect or the Speaker of the House, depending on if the Senate has selected a vice president by January 20.

Another possible outcome is that Trump refuses to accept the election results if he loses. While addressing supporters at the White House early Wednesday, with results still trickling in, the president claimed without evidence that the election was a "fraud on the American public."

"We were getting ready to win this election. Frankly, we did win this election," Trump said. "This is a major fraud on our nation. We want the law to be used in a proper manner. So we'll be going to the US Supreme Court. We want all voting to stop."

In response to Trump's comment that, "We're going to have to see what happens," in September, US senators unanimously passed a resolution guaranteeing a peaceful transition of power.

Many election watchers remain hopeful that the results will ultimately become clear enough that it won't come to that.

"I'm generally optimistic that we're going to make this work because the interest in the election is extremely high," said Goldenberg.

This is an updated version of an article originally published on October 15.