Former Vice President Joe Biden solidified his front-runner status in the race for the Democratic presidential nomination on Tuesday after winning the primaries in the US states of Florida and Illinois.

The two states along with Arizona went ahead with the primaries on Tuesday despite public heath concerns over the COVID-19 pandemic that prompted several other states to postpone the vote.

According to early results, Biden is also expected to bag Arizona.

Biden secured a landslide victory over Senator Bernie Sanders in Florida, leading 61.9% to 22.8%. In Illinois, Biden won by 59.4% to Sanders' 35.8%. US media also projected a comfortable win for Biden in Arizona.

With 219 delegates, Florida was the biggest prize of the night, while Illinois and Arizona have 155 and 67 delegates, respectively.

Biden currently leads the democratic presidential race over Sanders. He also won the most states in the Super Tuesday primaries earlier this month. Delegates from states are awarded to the candidate proportionally, based on the number of ballots cast in their favor. 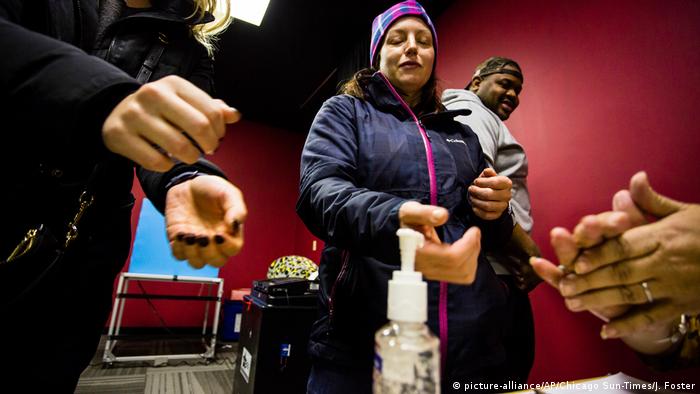 States that went ahead with the primaries took extra precautions, including providing hand sanitizer for voters

Ohio, which was due to also hold its primary on Tuesday, postponed the voting hours before the polls opened. Ohio's decision followed similar moves by Louisiana, Georgia, Maryland and Kentucky's to postpone the vote due to the ongoing COVID-19 pandemic.

Concerns over the outbreak appeared to impact voting, with early turnout in many areas of Illinois lower than expected. Florida relocated some polling sites which led to low turnout in certain counties.

State parties tried to salvage the situation by putting out updates about voter turnout figures and information about safety procedures undertaken in polling booths. The National Election Pool reportedly did not conduct in-person exit polls, instead choosing to do phone surveys.

Florida, Arizona and Illinois undertook precautions before their vote, including marking the floor in 6-foot increments so that voters maintained a safe distance between each other. However, some of the counties reported disruption as poll workers dropped out over virus concerns.

Tulsi Gabbard, who is one of three candidates left in the Democratic nominee race, tweeted her dissatisfaction with the primary elections being undertaken when the US has declared a national emergency because of coronavirus.

Sanders has conducted virtual rallies to ensure the coronavirus epidemic doesn't affect his campaign. Biden recently declared that he would select a woman as his running mate. The Democratic presidential primary winner will face off against US President Donald Trump in the upcoming presidential election in November.