Africa seeks to make sense of chaotic US election

US Democratic candidate Joe Biden has secured enough votes to become the next US leader. President Donald Trump has alleged fraud. And Africans are watching events with a mixture of bemusement and concern. Like the rest of the world, Africa has been paying close attention to the US election, since the United States still wields significant influence on what happens there. "Whoever is in charge in Washington and the policies they pursue have direct and indirect consequences for the continent," Achille Mbembe, a Cameroonian political analyst, told DW.

According to The Associated Press, Joe Biden has attained enough electoral college votes to become the next US president. Biden has pledged to unite the US after a bitter and hotly contested vote. President Donald Trump, for his part, has claimed that the Democrats have "stolen" the election and refused to concede defeat. Instead, Trump and his Republican party have launched multiple legal challenges in a bid to overturn the election outcome.

"Many Africans look at the US elections in a very cynical way — cynical in the sense that they know what stolen elections are all about," Mbembe said. "They know about incumbents not wanting to concede that they have been defeated." Some Africans have joked on social media that the US is becoming more or less like a post-colonial African state.

A bad example for Africa?

"It is surprising for Europeans and Americans, but not for Africans," Togolese activist Innocent Sossou said of Donald Trump's decision to declare himself the winner of the November 3 election. Trump is challenging the results in several states and wants a recount in Wisconsin.

It is common for opposition parties in African countries to contest election results. This was recently the case in Guinea, where the opposition presidential aspirant, Cellou Dalein Diallo, proclaimed he had won before the Electoral Commission published the official results. "But the paradox in the United States is that it is the president who speaks of fraud," Sossou said.

Ivorian journalist Mah Camara says the US has set a bad precedent for Africa, with presidents on the continent possibly taking their cue from the happenings before and during the election. Among other things, Trump has complained for weeks that the mail-in ballots — which were requested by millions of voters due to the ongoing COVID-19 pandemic — are susceptible to voter fraud. However, there has been no credible evidence that massive irregularities took place.

Donald Trump's refusal to accept defeat — especially since he is the outgoing president of a country that is taken by many Africans as an example to be followed — left civil society activist Henri Mutombo in shock.

"Trump's exit leaves us, the African youth, perplexed. We have been observing from a distance, but when this country, which gives a lot of lessons in democracy to African countries, starts to experience this democratic debacle, we wonder whether the world is in peril," Mutombo said. 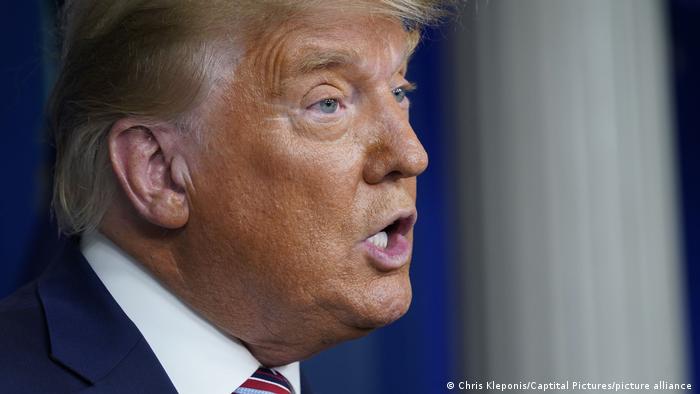 Even Germany has expressed concern about a very explosive situation in the United States and warned of a constitutional crisis. Such a statement is often issued after controversial elections in Africa.

Read more:  Opinion: US election tears at the seams of liberal democracy

According to Patrick Gathara, a Kenyan political satirist and commentator, the 2020 US election has exposed the democratic weaknesses within the world's largest economy.

"For a long time, the US has been one of the loudest proponents of peaceful, free and fair elections and democracy in general," Gathara told DW. "It has been preaching to Africa and in many ways helping us to improve our democracies, but it seems like while the US was preaching water, it was taking wine." 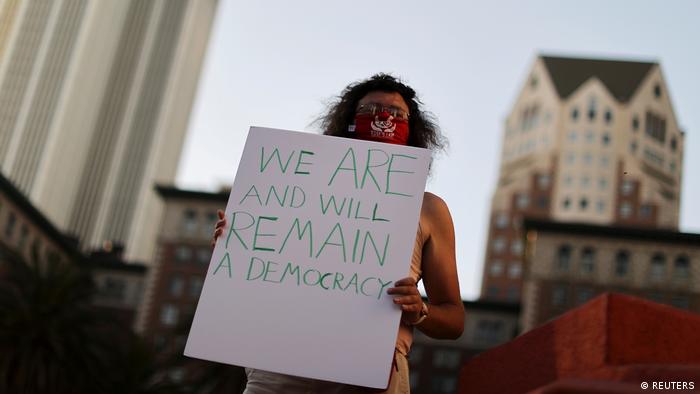 America's democracy is under the spotlight

For Mbembe, Trump never made the African continent a priority in his presidency. "He considered Africa as a burden. He might have shown some interest, but only in terms of the overall fight against so-called Islamic terrorism," he said.

Mbembe hopes that Biden will show more interest than Trump in advancing democracy in the continent. Nevertheless, he believes democracy in Africa will be the product of internal struggles within societies: "It can't come from outside. It won't be outsourced."

Kossivi Tiassou and Eddy Micah Jr contributed to this report.

President Donald Trump has claimed he is being cheated out of winning the election as Joe Biden was chipping away at his leads in key states. The Democrat has called for calm and expressed confidence he would win.