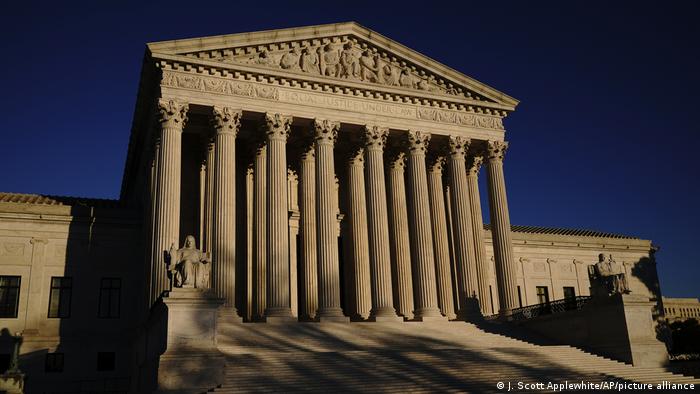 US President Donald Trump's campaign has filed lawsuits in the battleground state of Pennsylvania, Michigan and Georgia, setting the stage for a legal showdown to decide the winner of the tightly contested US presidential election.

The Trump team has demanded that the counting of votes be suspended in Michigan, where it said the campaign has been denied "meaningful" access to locations where ballots are being processed.

His Democratic rival, Joe Biden, has won the state of Michigan, according to the Associated Press as well as other US media.

Trump supporters chanted "stop the count" outside the TCF center in Detroit, Michigan where ballots were being processed.

Michigan's Secretary of State Jocelyn Benson called Trump's legal action to end counting in the state "frivolous," according to Reuters. She gave her assurance that all of the valid ballots cast in Michigan had been accurately and securely tabulated.

The Trump campaign is also suing to freeze the vote count in Pennsylvania where the president has sought the Supreme Court's intervention to exclude the processing of mail-in ballots that arrived after the closing of polls despite state law allowing for them to be counted.

OSCE observer: 'No evidence of systemic wrongdoing in Pennsylvania'

The race in Pennsylvania remained undecided on Wednesday as a significant number of ballots remain to counted in the state which received 3.1 million mail-in ballots. State law allows them to be counted if they are postmarked by November 3 and received by Friday.

Trump's team also filed a lawsuit against the state of Pennsylvania, claiming that its extension of the voter ID deadline was a violation of state law. White House Correspondent Carrie Sheffield tweeted a statement from the Republican National Committee which accused Democrats of making "voting changes in the eleventh hour that will only dilute the integrity of the vote."

Trump, the nominee for the Republican Party, is ahead of Biden in Pennsylvania, but his lead is shrinking as the mail ballots are being counted. Across the United States, Trump generally performed better in in-person voting on election day than in mail-in voting.

The Trump team and the Georgia Republican party said they plan to sue dozens of counties in the state, demanding that vote counting be paused. 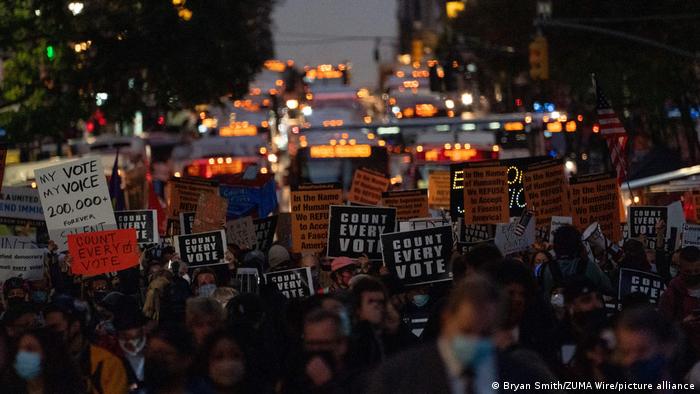 Trump also holds a narrow lead against Biden in Georgia — a winner has not yet been predicted in the state. However, ballots in several large counties that lean Democratic remain to be counted.

Georgia Secretary of State Brad Raffensperger said he hoped for a definitive result by the end of Wednesday.

According to Georgia law, a recount can be requested within two days of the official results if the margin between the candidates is equal to or less than 0.5%.

The Trump team has asked for a recount in Wisconsin — won by Biden — citing "irregularities in several counties," without providing specifics. With 99% of the vote counted in Wisconsin, Biden leads Trump by over 20,000 votes.

Because the gap between the president and his Democratic challenger in Wisconsin is less than 1%, it meets the legal threshold for a recount.

Read more: Was the US election about the economy or not?

Wisconsin, together with Michigan and Pennsylvania, forms a part of what Democrats call the "blue wall," a trio of states that their candidates had been able to count on every four years, but which they lost to Trump in 2016. Projections in Michigan and Wisconsin show Biden won those states back for the Democrats.

Trump has made unprecedented and unsubstantiated claims of fraud and declared victory in states that have either been called for Biden or not been called so far.

Biden, in an address to his supporters, said the count should continue in all states. "No one's going to take our democracy away from us, not now, not ever," he said on Wednesday.

Election officials continue to count votes across the United States in a process that usually follows election day. What is unusual this time is that states have to deal with a vast number of mail-in ballots that were driven by fear of in-person voting during the coronavirus pandemic.