The United States and Australia have said they plan to take concerns about returning jihadist foreign fighters to the United Nations. The threat posed by such individuals has also been on the minds of German politicians. 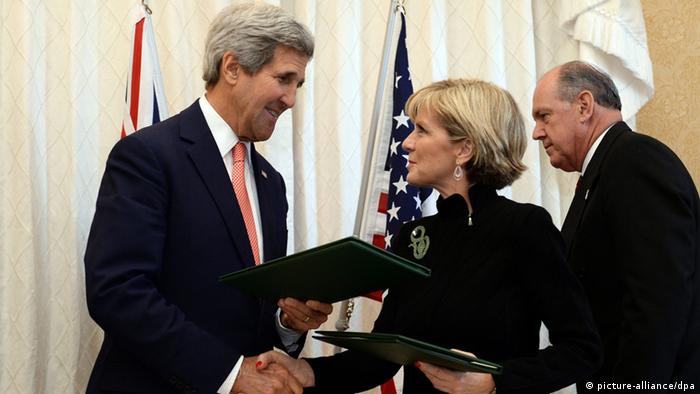 US Secretary of State John Kerry told reporters in Sydney on Tuesday that he and his Australian counterpart, Julie Bishop, had agreed to go to the UN to look for ways to reduce the risk of attack by people who leave their home countries to fight with Islamist militants in foreign countries, and then return home.

"We intend to join together in order to bring this to the United Nations meeting this month and put it on the agenda in a way that will elicit support from the source countries as well as those countries of concern," Kerry said.

He added that the two countries had agreed to "work together to assemble a compendium of the best practices in the world together regarding those foreign fighters."

The issue was part of annual security discussions between the US and Australia, which wrapped up on Tuesday. Concerns about the threat to security in Western countries of radical Islamists returning home from fighting in places like Iraq and Syria were highlighted on Tuesday by a picture posted on the Internet.

The image, posted via Twitter, is reported to show a seven-year-old boy who was raised in Sydney, holding the severed head of a soldier in Syria. According to The Australian newspaper, the boy is believed to be the son of the country's most wanted terrorist, who fled to Syria last year and now fights for the "Islamic State" rebels.

Bishop said the picture was a warning to the West to take the threat posed by such Islamists seriously.

"Their barbaric ideology is a threat to our very way of life," she said.

Australian officials believe as many as 150 of the country's citizens are fighting alongside Islamists in Iraq and Syria.

At the conclusion of their meeting Kerry, Bishop, US Defense Secretary Chuck Hagel and his Australian counterpart, David Johnston, signed a deal which will allow the US to increase the number of marines and air force personnel rotating through Australia's Northern Territory.

Not just the US and Australia, but also European Union member states have expressed concerns about the possible threat posed by Islamists returning from fighting in foreign conflicts.

On Monday, German Foreign Minister Thomas de Maiziere said that officials were looking into possible measures designed to either prevent German residents or citizens from returning from such conflicts - or to stop them leaving in the first place.

Speaking in an interview with public broadcaster MDR, de Maiziere said under current legislation, it was easier to deal with suspected foreign nationals.

"A foreign national can have his passport seized, or you can refuse him entry," de Maiziere said.

The government also has the power to seize the passport of a German national, but security officials say many of those who leave the country to fight in Syria do so via Turkey, which can be entered using a government issued identity card.

De Maiziere said a working group made up of officials from the German government and its 16 states was currently looking into the possibility of introducing legislation to all for identification cards to be withdrawn as well. However, he also conceded that this would be tricky, as under current legislation, German citizens are required to carry their ID cards with them at all times.

United States officials have confirmed they are sending weapons to support Kurdish fighters battling "Islamic State" militants in Iraq. As fighting goes on, other nations are discussing whether to do the same. (11.08.2014)

Opinion: 'German jihadists should not be indulged'

As a new home to many migrants, global conflicts are increasingly being played out in microcosm in Germany itself. That is something that poses certain questions, says DW's Kersten Knipp. (09.08.2014)