The relentless march of the 'Islamic State'

The "Islamic State," formerly known as the Islamic State of Iraq and Syria (ISIS) has dramatically expanded its power base in recent months. DW takes a look at the group's origins, financing and wider implications. 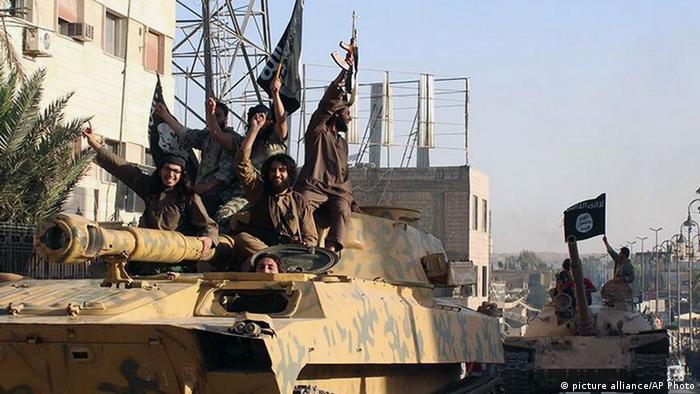 Renowned for its savagery, the "Islamic State" has stunned the world with its military successes in the past two months, taking over huge swathes of territory on either side of the Iraqi-Syrian border.

Since the group began making a name for itself, DW has been answering questions about its origins as well as the implications for those living in the area and further afield.

The situation is dire for the 200,000 Yazidis fleeing the violence of Islamic State fighters in northern Iraq. Members of the persecuted religious minority say they even feel abandoned by Kurdish peshmerga fighters. (10.08.2014)

Germany's Foreign Office has nearly doubled ist emergency humanitarian aid for refugees in northern Iraq. Kurdish fighters, however, are above all asking for weapons - a controversial demand. (12.08.2014)

Bashar Assad is now seen as less of a threat than the ISIS militants in the Syrian civil war. But experts warn attempting to make an ally of the regime in Damascus is not in the West's interest. (16.07.2014)

ISIS militants are selling oil from their conquered territories, further fueling tensions in the region. This has caused uncertainty on the world market, but could also lead to a drop in global oil prices. (05.07.2014)

Kurds struggle to unify against ISIS

Experts say the Kurds in Iraq and Syria might fight a successful campaign against ISIS. But cooperation between the two groups seems unlikely. (18.07.2014)

Islamist terror group ISIS has announced the formation of a transnational Islamic state stretching beyond Iraq's borders. But the different political leanings within the group could get in the way of realizing this goal. (01.07.2014)

ISIS militants in Iraq want to erase borders in the Middle East and create a regional caliphate. Their model is the Ottoman Empire - a historical imposition in its own right. (25.06.2014)

In the aftermath of its conquest of Mosul, the jihadi organization ISIS has been recognized as the richest terrorist organization in the world. Where does its money come from? (19.06.2014)

The government in Baghdad has hundreds of thousands of soldiers and armed police under its command. But a raft of deep structural problems is crippling the Iraqi army's ability to fight ISIS militants. (14.06.2014)

The change needed to bring about a new, democratic Middle East can only come from within, says DW's Naser Schruf. It's the only way to effectively counter terrorist groups like the "Islamic State." (12.08.2014)