The situation is dire for the 200,000 Yazidis fleeing the violence of Islamic State fighters in northern Iraq. Members of the persecuted religious minority say they even feel abandoned by Kurdish peshmerga fighters. 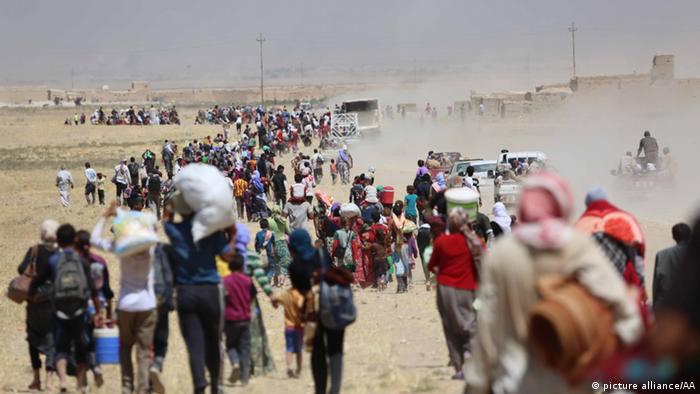 Hussein Koban, a student in Dortmund, has not been able to sleep for days. His family, part of the Yazidi religious minority, is among the roughly 1,000 refugees now waiting to cross the Iraqi-Turkish border.

"I speak with my relatives every hour on the phone," said the young man, clearly upset. "They are waiting to be admitted to Turkey. But since they don't have any ID with them, they're not allowed to cross the border. They have almost nothing to eat. These people are at the mercy of fate."

According to the Kurdish news agency ANF, around 300 Yazidis have already arrived safely in the Turkish town of Silopi.

Members of the religious minority are not only seeking refuge in Turkey, but also in the Sinjar mountains on the border and in Kurdish areas in neighboring Syria. 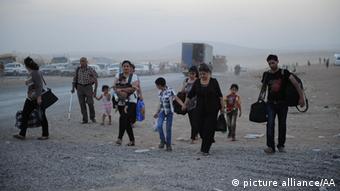 Many Christians and Yazidis have fled to Irbil

Kurdish journalist Barzan Iso is currently at the Syrian-Iraqi border and has spoken with several Yazidis. In an interview with DW, the reporter explained that many of them felt betrayed by the Kurdish peshmerga forces in northern Iraq, who are supposed to provide security in the Kurdish autonomous region in northern Iraq.

Many refugees accuse Kurdish forces of abandoning the Yazidi stronghold of Sinjar to "Islamic State" (IS) militants without a fight. "A Yazidi woman told me that IS fighters only drove into town with four vehicles and that the peshmerga simply fled," said Iso, adding that Yazidis felt forsaken and had lost confidence in the Kurdish fighters.

The peshmerga, according to the journalist, initially denied the allegations, before eventually admitting to having chosen the wrong strategy and that the commanders in charge would have to face the consequences.

'The situation in Irbil is catastrophic'

Meanwhile, Yazidi and Christian refugees are still on the run. Many have now arrived in the northern Iraqi city of Irbil, where German-Kurdish human rights activist Fuad Zindani has described the situation as dire.

"Christians and Yazidis have been forced to hide in nearby churches," he told DW. "They have nothing to eat or drink. Hygienic conditions are slowly taking on catastrophic proportions."

When IS militants took control of the area, they gave the Yazidis an ultimatum: either leave their villages within two hours or convert to Islam. People panicked and quickly fled. Several women were allegedly raped, and dozens of men were beheaded.

According to eyewitnesses, said Zindani, IS fighters stopped people as they escaped and forced them to hand over money and valuables. As he was speaking with DW by phone from a church, panic broke out. Shortly thereafter, the line went dead. 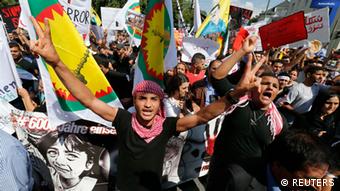 Several thousand Yazidi are also seeking refuge in the Kurdish autonomous region of Rojava in Syria where, according to Barzan Iso, the armed Syrian Kurdish group YPG has established a humanitarian corridor for refugees. The 40-kilometer (24.8 mile) corridor begins in the Iraqi town of Zakho and leads refugees to the Syrian city of Al Yarubiyah, controlled by Syrian Kurds.

In addition to the YPG, the Turkish Kurdish movement PKK and Kurdish peshmerga forces from Iraq are helping to secure the route. "To date, more than 20,000 Yazidi have reached Syria via this corridor," Iso explained.

But according to news agency ANF, thousands of Yazidis are still waiting for help in the Sinjar mountains, near the Iraqi-Turkish border. One of them is the 27-year-old Xalit Tsuko, who told ANF how he was forced to leave his village after IS militants made their attack.

"We heard gunfire and panic broke out in our village," he said. "My wife, my six children and I fled our home, each of us carrying one of our children in our arms." In the chaos, he watched helplessly as his daughters Selwa, 7, and Xalide, 8, were knocked over in the panicked crowd and trampled to death.

"Later, we lost two other children on the way to Mount Sinjar. I don't know if they died or are still alive."

Human rights activists have called for immediate help for the persecuted minorities in northern Iraq. For those who don't share the ideology of the "Islamic State" militants, the situation is desperate. (09.08.2014)

US President Barack Obama has declined to say how long the current American military operations in Iraq will likely continue. He also said the crisis could only be resolved after a unified Iraqi government is in place. (09.08.2014)

Yazidis rally in Germany against 'IS'

Thousands of people from Germany's Yazidi Iraqi population have taken part in a protest against the rampage of the "Islamic State" terror group in northern Iraq. Many of their compatriots have been forced to flee. (09.08.2014)