The plight of the Kurdish peshmerga

As the "Islamic State" continues its fight for power in Iraq, resources have been key to the group's strategy. DW correspondent Birgit Svensson reports on the Kurdish peshmerga force and the battle for the Mosul Dam. 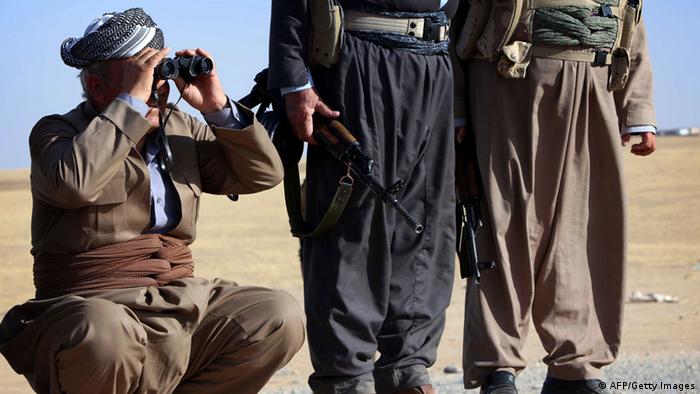 "There - there they are." Faisal Abdullah points ahead of him and passes me his binoculars. But even through the magnifying lens, the men that Abdullah is pointing to are hard to recognize.

"These are the Daash," says Abdullah, the major of the Kurdish peshmerga fighters, in reference to the stick-figure-like people in the distance. "They have beards and are dressed in black. Some of them wear long tunics like in Afghanistan."

Abdullah, dressed in a brown-green uniform, commands a group of around 60 militants and has just returned from the Mosul Dam, where he and his men fought against the "Islamic State" (IS) terrorist group for 15 days. With an ageing, sunburned face, Abdullah looks exhausted and depressed. Although he and his fighters managed to take control of the dam, the situation there has been unstable for days, he explains.

The dam and its sluices have strategic importance for IS, which has declared a caliphate - an Islamic state headed by a supreme leader - in parts of Iraq and Syria. A secure water supply is an essential component in its political plan.

The fight for water is just as bitter as the fight for oil. The IS - or Daash, as it's called in Arabic - has already seized control of the Anbar Province northwest of Baghdad, and with it, control of the water coming from the Euphrates River, but it also wants access to water from the Tigris. If it succeeds, Iraq's entire water supply will be at the mercy of the terrorists' whims. In other words, IS would control access to an essential resource for more than 33 million people.

"We cannot allow that to happen," says Abdullah.

On the road from Tilkef to Dohuk, the presence of the Kurdish militants cannot be missed. Long convoys of military trucks and jeeps are taking soldiers into the mountains of Iraqi Kurdistan, mixing with the countless streams of refugees fleeing from IS-controlled areas.

The second wave of IS attacks began late Wednesday evening (06.08.2014), going eastwards in the direction of Erbil, the capital of the autonomous Kurdistan region, and to the north towards Dohuk. Earlier, the terrorist group had attacked the Yazidi city of Sinjar, captured Zmmar at the Mosul basin and entrenched themselves in preparation for the battle at the dam.

The goal of IS seems to be clear: to see the so-called caliphate stretch from the Syrian border to Kurdistan. In order to achieve this, they are bombing and shelling Christian, Yazidi, Turkmen and Kurdish villages and cities, setting churches and tombs on fire, plundering houses and shops and murdering anyone standing in their way. Hundreds of thousands of those affected are currently seeking refuge in Irbil, Dohuk and the mountains of Kurdistan.

"They aren't human," says Abdullah, referring to IS militants. Their main interest is dying for the jihadist cause, he adds, "while we want to continue living."

On Friday (08.09.2014) the peshmerga withdrew, resigned and discouraged. Several towns, including the Christian stronghold of Qarakosh, had fallen into the hands of the IS. The terrorist group got to within 40 kilometers (25 miles) of Erbil and 50 kilometers of Dohuk. According to the local Kurdish government, 150 Kurdish fighters have been killed and 500 injured. "We cannot deal with them alone," says Abdullah, before getting into a jeep and driving home to rest.

'Those who confront death' 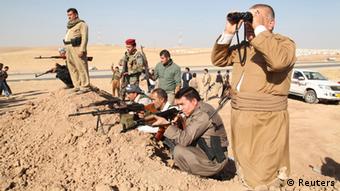 Peshmerga fighters in Iraq have welcomed US assistance

Peshmerga is the Kurdish name for Iraqi-Kurdish resistance fighters and literally means "those who confront death." The force is made up of the armed units of the Kurdistan Democratic Party and the Patriotic Union of Kurdistan. Some refer to it as the Kurdish militia. The organization traces its roots to the downfall of the Ottoman Empire, which ruled over Kurdish territory into the 1920s. The Kurdish independence movement formed during this time.

Since the 1960s, the peshmerga have been involved in a fight for more autonomy with the Iraqi government in Baghdad. Former Iraqi leader Saddam Hussein suppressed their efforts with poison gas attacks, deportations and mass executions.

During the occupation of Iraq by American and British forces in 2003, the peshmerga marched on their behalf into the cities of Mosul and Kirkuk because the Turkish government had denied US troops access to northern Iraq via Turkey. After the fall of Saddam Hussein, the Kurds withdrew from the regions, but have since then claimed control of Kirkuk and other Kurdish-majority towns outside the Kurdish provinces of Erbil, Dohuk and Sulaymaniyah.

Support across the water

In June, the peshmerga got their chance. On the command of the Kurdistan government, they secured the areas around Kirkuk and northern parts of Mosul stretching up to the Syrian border following Iraqi troop withdrawal from the region. But now the IS is claiming the area for itself.

On Thursday (07.08.2014), when US President Barack Obama announced his support for the Kurds in the fight against the IS in a TV broadcast, cheering erupted in Dohuk. A crowd of mostly young people gathered to demonstrate in the city center, singing patriotic songs and waving Kurdish flags.

"Thank you, Obama!" they shouted. "Go, peshmerga! Out with the Arabs!"