Yazidis rally in Germany against 'IS'

Thousands of people from Germany's Yazidi Iraqi population have taken part in a protest against the rampage of the "Islamic State" terror group in northern Iraq. Many of their compatriots have been forced to flee. 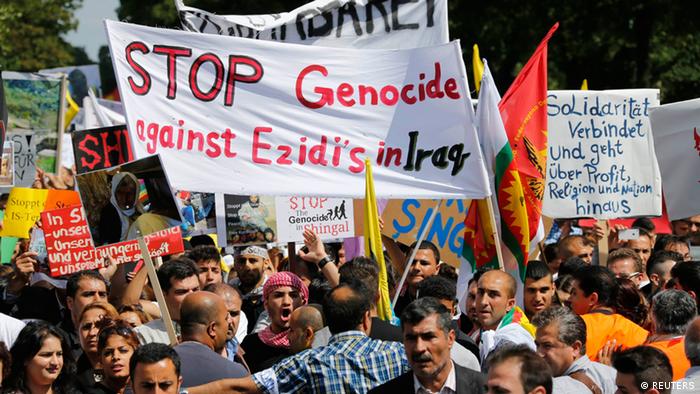 Several thousand people marched in the major demonstration organized by Germany's Yazidi community in the town of Bielefeld on Saturday afternoon.

About 5,000 participants walked through the town center waving Kurdish flags and holding placards bearing messages such as "This is not a war but a genocide" and "Stop IS," referring to the terror group that calls itself the "Islamic State."

DW reporter Marcus Lütticke was at the scene:

There are an estimated 60,000 Yazidis living in Germany. At the Bielefeld event, community representatives held speeches, mainly in Kurdish, denouncing IS's campaign of terror, which has displaced thousands of their countrymen in Iraq's north.

A police spokeswoman said the rally had been largely peaceful. More people were expected to attend later in the day. Organizers had hoped for a turnout of at least 10,000.

Several rallies have been held in Germany over the past week. A Yazidi rally held on Wednesday in the German town of Herford, just a few kilometers from Bielefeld, turned violent.

A group of men believed to be from Chechnya attacked a Yazidi shopkeeper in the town, sparking a riot on Wednesday night.

Police in Bielefeld were prepared for any confrontations.

Yazidi protests were also held in Hanover, Detmold and Essen, with future events planned for Dortmund, Frankfurt and Göttingen.

Telim Tolan, chairman of the Central Council of Yazidis in Germany, told DW that the minority was in the midst of a humanitarian catastrophe.

The United Nations estimates that up to 50,000 members of the Yazidi religious minority are trapped in Iraq's Sinjar mountains, after fleeing the advance of IS militants into the city of Sinjar last weekend.

The US has completed humanitarian aid airdrops over the region to provide them with rations and drinking water.

Fighters from IS have claimed a large chunk of Iraqi territory in recent weeks, most notably the country's second-most populous city, Mosul. Over the past week, IS started moving north towards Iraq's partially autonomous Kurdish territory, which borders Turkey.

In total, the UN estimates that more than half a million people have been displaced by the IS advance, many of them fleeing into the northernmost Dahuk province, in Kurdish territory.

Opinion: 'German jihadists should not be indulged'

As a new home to many migrants, global conflicts are increasingly being played out in microcosm in Germany itself. That is something that poses certain questions, says DW's Kersten Knipp. (09.08.2014)