US planes drop food, water for refugees stranded in Iraq

The Pentagon has confirmed a second humanitarian aid drop over Iraq's Sinjar mountains, where thousands of Iraqis - mostly Yazidi - are trapped. This follows the first day of US airstrikes on militants in the region. 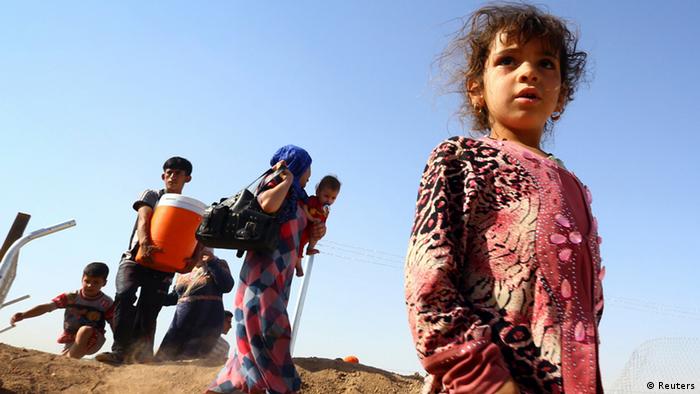 The chief spokesman for the Pentagon, Rear Admiral John Kirby, said in a statement issued late on Friday, local time, that US planes had launched a second airdrop of food and water for thousands of people forced into the hills by the advance of the militant group that calls itself "Islamic State" (IS).

"This airdrop was conducted from multiple airbases within the US Central Command area of responsibility and, as with last night, included one C-17 and two C-130 cargo aircraft that together dropped a total of 72 bundles of supplies," the Pentagon statement said. Two F-18 fighter jets from the USS George H.W. Bush aircraft carrier stationed in the Gulf accompanied the cargo planes. 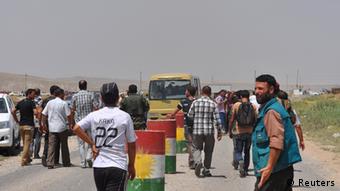 Thousands of Yazidi have fled the region to the north, but many others are trapped in Sinjar mountains

The UN estimates that up to 50,000 members of the Yazidi religious minority are trapped atop the Sinjar mountains, after fleeing the advance of IS militants into the city of Sinjar last weekend. The overnight airdrop provided US military rations and drinking water.

Fighters from IS, also known as ISIS or ISIL in some quarters, have claimed a large chunk of Iraqi territory in recent weeks, most notably the country's second-most populous city, Mosul. Over the past week, IS started moving north towards Iraq's partially autonomous Kurdish territory that borders Turkey.

In total, the UN estimates that more than half a million people have been displaced by the IS advance, many of them fleeing into the northernmost Dahuk province in Kurdish territory.

US airstrikes against Irbil advance

US warplanes on earlier on Friday launched two waves of airstrikes against suspected IS targets in Iraq, following authorization from President Barack Obama.

One of the US targets on Friday was an IS convoy that was headed towards the city of Irbil - the capital of the Kurdish region and home to a US consulate and some US military trainers. Irbil has a population of roughly 1.5 million people, almost as many as IS-held Mosul to the south.

Both President Obama and Secretary of State John Kerry said when authorizing the airstrikes that the Sunni Muslim IS advance through Iraq - and its calls for believers in other religions to convert, pay a fine, leave or face death - had the potential hallmarks of "genocide."

The Iraqi government has also sought to help Kurdish peshmerga fighters to the north, after the IS advance prompted Baghdad and Irbil to set aside longstanding squabbles over territory, autonomy and control of oil resources in the region. Last week, Iraq promised air support for Kurdish fighters, and on Friday, a US official told the Reuters news agency that the government in Baghdad had sent ammunition to peshmerga forces in Irbil, calling it an "unprecedented" act of cooperation.

In Germany, a major demonstration of the country's Yazidi population is scheduled for Saturday in Bielefeld; organizers hope for a turnout of at least 10,000.