"Islamic State" militants have seized the Iraqi city of Sinjar, one of the main settlements of the minority Yazidi community. Telim Tolan, chairman of the Central Council of Yazidis in Germany, has warned of genocide. 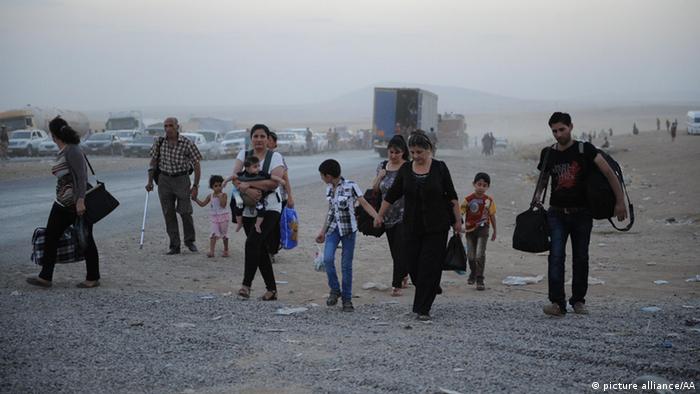 DW: What news have you heard from your Yazidi brethren in northern Iraq?

Telim Tolan: The situation on the ground is disastrous. We are not facing a humanitarian disaster, but are in the midst of one. After the terrorist group "Islamic State" took over the town of Sinjar [earlier this week] they fled in all directions. They have no food, and many are now scattered in the mountains without adequate supplies.

Where is this all happening?

In northern Iraq, around the town of Sinjar. The area lies near the Syrian border. About 80 percent of the Yazidis in Iraq live in the region, approximately 500,000 people. The Yazidis are native to this area and make up about 80 to 90 percent of the population.

What have you heard about the violence?

We have information that there have been executions, that Yazidis have been forced to convert to Islam. If they refuse, they are publicly executed. We have heard of women and girls who have been abducted and are now being sold at bazaars. There have been rapes. The whole thing is very worrying. Approximately 200,000 of the 500,000 Yazidis in the region are on the run, a number confirmed by the UN.

How do you explain the hatred toward your fellow believers?

The Yazidi faith is an independent religion with roots going back 2,000 years before the birth of Christ. It's a religious community with a unique theology and a unique vision of how the world was created, completely different to Islam theology. The Yazidis have been targeted by the terrorists because they are not recognized as a legitimate religious community. The terrorists believe that they need to be forcibly converted or killed if they do not join the legitimate religion.

How have the Yazidis here in Germany reacted?

The roughly 100,000 Yazidis who live in Germany are in absolute shock. They know what the Islamists in Iraq are capable of; they've seen the pictures circulated in the media. Similar atrocities are now happening in Sinjar. This has saddened people here. They are showing their solidarity for their sisters and brothers in the homeland, holding rallies and conferences. We are asking institutions, politicians and the German government to help the people of Iraq. We have launched a fundraising campaign and are making sure that the funds go directly to Iraq for immediate action.

What are you asking from the international community?

First, we are urgently asking the United Nations and the German government to provide humanitarian aid, and take immediate measures to ensure it gets to the people in the region. Then, it's crucial that the United Nations Protection Force intervene. Armed forces on the ground in and around Sinjar no longer have the area under control; the "Islamic State" now dominates. This protection must come from UN peacekeepers, from the reinforcement of Kurdish troops and also those of central Iraq.

Telim Tolan is chairman of the Central Council of Yazidis in Germany, based in Oldenburg.