Non-Muslims in Iraq suffer violent attacks and discrimination. Many Christians, Yazidis and Mandeans have fled the nation. Only in the Kurdish north are religious minorities safe - except when they live in 'mixed' towns. 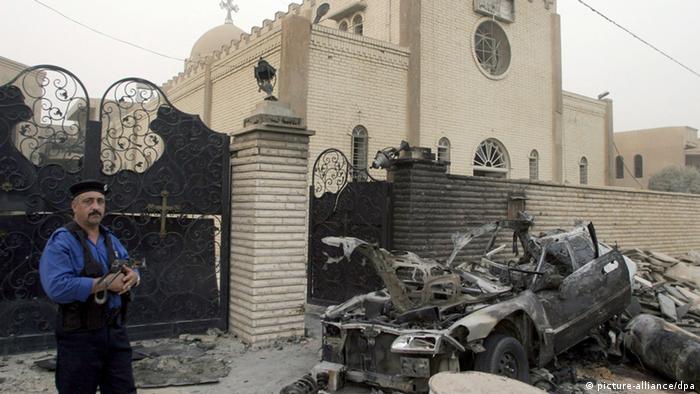 Violence, kidnappings and attacks on religious minorities are a daily occurrence in Iraq, where a national patchwork of religious and ethnic groups once existed, a sense of unraveling remains.

Violence against minority religious groups had already begun before the fall of Saddam Hussein. Hussein reached the apex of his in the midst of a bloody conflict between Kurds and Arabs, Sunnis and Shiites. Caught in the crossfire of those battles were Christians; Yazidis, a Kurdish ethno-religious group; and a group known as Mandeans.

Churches are now regular recipients of bomb attacks - as they have been for years. When Patriarch Louis Raphael I Sako became head of the Chaldean Catholic Church in Iraq in March 2013, security authorities in parts of Baghdad were on high alert. The patriarch, however, is the leader of a congregation in decline.

In addition to many Catholics, Christians of other denominations are leaving Iraq. From what was once a group of roughly 1 million Christians in the biblical land of Babylon, a few hundred thousand remain. Iraq's other religious minorities have suffered a similar fate.

Day-to-day life is particularly difficult for Mandeans, whose religion accepts certain Old and New Testament figures - Adam, Noah, John the Baptist, for example - but rejects Abraham, Moses, and Jesus Christ. The religious community is based in southern Iraq, whence it traces its origins for over 2,000 years to John the Baptist. Mandeans argue that the Koran itself would define them as a "people of the book" - that is, as adhering to a religion worthy of protection. Many Iraqi Muslims see things otherwise. 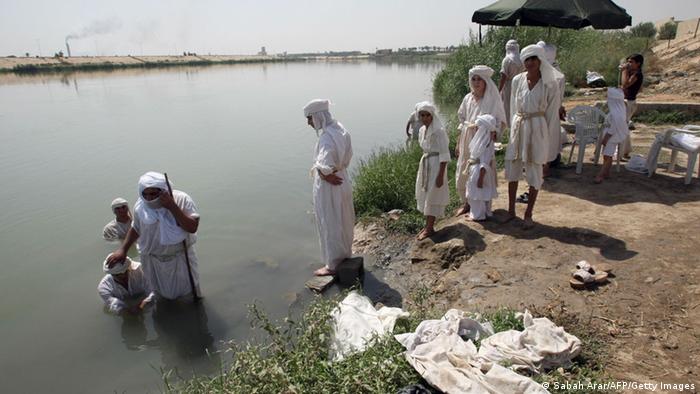 Mandaeans wait to be baptized on the banks of the Tigris River, which runs through the center Baghdad

Attacks are common against the Mandean religious community, said Sabih Al-Sohairy, a professor of the Mandean language in Baghdad and a Mandean himself. Today, many Mandeans won't admit to their religious beliefs, he told DW. At a local café, for example, an "outed" Mandean wouldn't be served coffee.

"People wouldn't reuse a glass that had been used by a Mandean," Al-Sohairy said.

So many Mandeans have fled Iraq that the continued existence of the religion is now in question. Ten years ago, approximately 30,000 Mandeans lived between Baghdad and Basra. Today their numbers have dropped to 5,000. Most flee as exiles to Germany, Scandinavia or the United States. "Many believe that there's no future for Mandeans in Iraq anymore," said Al-Sohairy.

For Iraq's Yazidis, whose numbers are large in comparison to Mandeans, the threat of extinction is a non-starter. Northern Iraq is home to a few hundred thousand adherents of the ancient, oriental religion.

But they, too, are hated by Muslims, who consider them "infidels" and "devil worshippers." Violent attacks against Yazidis reached a peak in 2007. In a single day more than 400 were killed. To this day there are still bombings.

"When the Iraqi elections get close, the attacks will go up again," said Ilyas Yanc, the education director of the Yazidi chapter in Oldenburg, Germany. In German asylum cases, Yazidis are no longer classified as victims of persecution, Yanc said. A few years ago that was not the case.

For Yazidis in northern Iraq, things are better than in the other Arab regions. According to Yanc, the regional government of Iraqi Kurdistan will be spending millions to restore the religious community's holiest site, located in the Lalish valley near the Iraqi city of Mosul. Even Yazidi festivals are recognized as public holidays in Iraqi Kurdistan.

Still, Yazidis are at a disadvantage in education and at the workplace. A report issued by Kamal Sido of the Germany-based Society for Threatened Peoples International said, "In a mixed village, discrimination can take the form of specific passages of the Koran being recited during prayer calls that are offensive to Yazidis." 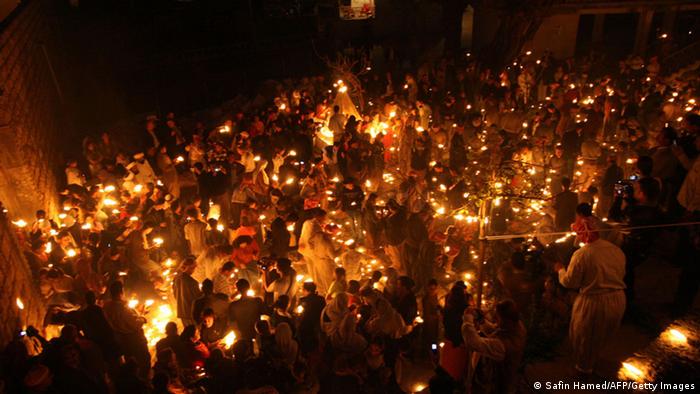 Iraqi Yazidis light candles outside the Lalish temple, situated in a valley near Dohuk

According to Iraq's constitution, Christians, Yazidis and Mandeans are allowed to practice their religions freely. Practically speaking, though, the law is of little value for religious minorities.

Religious minority groups suffer from attacks and rampant crime. Individual Christians and Mandeans have been kidnapped to blackmail their groups for large sums of money. Militant bands attack stores owned by adherents of religious minorities - particularly when those stores carry alcohol.

Sido said he views the future of religious minorities in Iraq with skepticism, "The old days will never come back for the Mandeans."

The Iraqi government would like to provide better protection for religious minorities, Sido said, but added that success has been limited.

It's the north, above all else, where non-Muslims can openly practice their religion.

"Only in Iraqi Kurdistan can you talk about having a Yazidi or Christian life," Sido said.

Jailed Kurdish rebel leader Abdullah Ocalan has called for a ceasefire and urged armed followers to withdraw from Turkey. Experts, however, still expect a long and difficult peace process. (21.03.2013)

'We let the Iranians say whatever they want'

Menache Amir has dedicated his life to bringing Iranians the real news. As if bucking Iranian media control weren't enough, he's also a citizen of one of the countries most vilified by the regime: Israel. (27.03.2013)