Germany's Foreign Office has nearly doubled ist emergency humanitarian aid for refugees in northern Iraq. Kurdish fighters, however, are above all asking for weapons - a controversial demand. 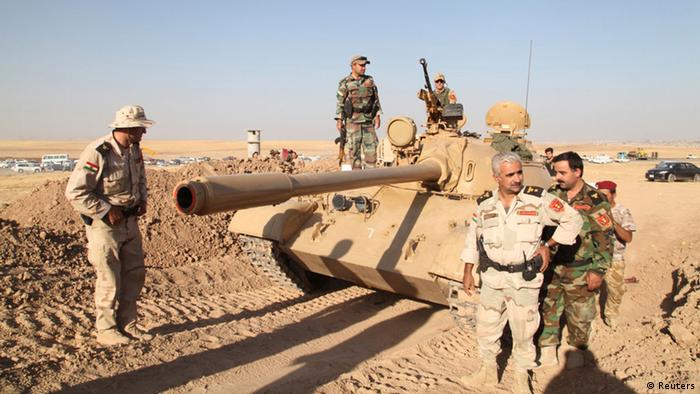 A group of politicians, human rights activists, artists and religious representatives have called on the German government to provide more humanitarian aid for persecuted Christians, Yazidis and other religious minorities in northern Iraq. There is growing concern that Germany is reacting too slowly and not providing enough aid to prevent a humanitarian catastrophe in the region.

"The rise of the radical Islamic terrorist organization "Islamic State" (IS) is threatening the lives of tens of thousands of people in Iraq," the group said in an open letter published Monday (11.08.2014), which was also signed by politicians from Germany's ruling parties, the Christian Democrats (CDU) and the Social Democrats (SPD), and representatives of the Greens, the Free Democrats (FDP) and the Left Party.

So far, Berlin has made around 4.4 million euros ($5.8 million) in humanitarian aid available to refugees, up from 2.9 million euros just last week. The funds are mainly going toward providing medical care, physical rehabilitation and clean drinking water, and to restore the livelihoods of the displaced. The German government has said it will remain in close contact with UN agencies like the Office for the Coordination of Humanitarian Affairs (OCHA) and other international and German aid organizations, should any additional aid be required. 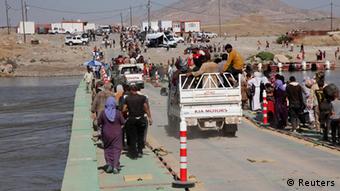 Hundreds of thousands are on the run in northern Iraq

Speaking with the German daily "Süddeutsche Zeitung" on Monday, German Foreign Minister Frank-Walter Steinmeier said that hundreds of thousands of people were fleeing "Islamic State" militants and had found refuge in the Iraqi Kurdistan region. "We must help these people," he said. Steinmeier added that he was in contact with Massoud Barzani, the president of the semi-autonomous Kurdish Regional Government, "to see how we can offer support in this extremely critical situation."

If it were up by Barzani and the Kurdish fighters, Germany's support would include weapons. However, Berlin is unlikely to grant this request. "It is one of the principles of this government's arms export policy, as well as the policy of all previous governments, not to provide weapons in crisis and war zones," said government spokesman Steffen Seibert. "The current government will remain committed to this principle."

Norbert Röttgen, chairman of the Committee on Foreign Affairs in the German Bundestag, agrees with the government's stance. "German arms shipments in an acute military conflict situation would clearly contravene the guidelines for arms exports, and also in no way contribute to the solution of the conflict," the Christian Democrat (CDU) told the "Welt am Sonntag" newspaper on Sunday (10.08.2014).

Röttgen's CDU colleague, foreign policy expert Karl-Georg Wellmann, disagrees completely. Germany is in a "situation which is gradually beginning to embarrass me," he told German public radio Deutschlandfunk. He said the US would provide most of the active support for Iraqi refugees, while Germany would "send a few tents, add another million euros and take in a few more refugees.

"Just standing by and watching, offering only pious words, is not enough for me," said Wellmann. "The Kurds are moderate and would support Western values."

Greens for, SPD against

Rolf Mützenich, a foreign policy expert for the Social Democrats, believes that ultimately arms shipments would not improve the situation. In Iraq, he said, there is no shortage of weapons. 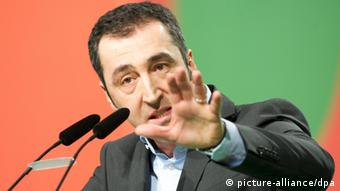 Özdemir: Kurdish peshmerga fighters have saved thousands of lives, "not with yoga mats but with weapons"

"More than $12 billion have been spent in recent years for weapons," he said in an interview with German public radio WDR on Monday. The sticking point, he said, is that the various groups in Iraq are not prepared to act together and take on their common enemy. "I think we must concentrate on that and the fact that any weapons could also possibly be used in a new civil war." Germany, he added, should work with other Western states to help establish a national unity government in Iraq.

Of all people, it's been the Greens who have spoken out in favor of weapons shipments. Speaking on public TV broadcaster ARD, party leader Cem Özdemir said the Kurdish peshmerga fighters have already saved the lives of thousands of Yazidis.

"They didn't do this with yoga mats but with weapons. And they received these weapons from the Americans," he pointed out, adding that he saw nothing wrong with it. Given the unimaginable cruelty and danger of the IS militants, Özdemir said he understood the US decision to support the Kurdish fighters with arms.The world community must not allow the Yazidis and Christians, who have lived in the border region for millennia, be wiped out, he added.

The Left wants to back PKK

Left Party politicians have rejected both the proposed arms shipments and the US military actions. They say it won't be the US airstrikes that save tens of thousands of lives, but the actions of the Kurdish militias, "especially the guerrilla fighters of the Kurdistan Workers' Party (PKK)," said Left parliamentarian Ulla Jelpke. She is currently travelling in the Kurdish region and has said that refugees are in urgent need of humanitarian support.

Speaking with ARD on Monday, Left Party leader Gregor Gysi also said he was against the US airstrikes. But, he gave his full support to airdrops containing food and water for the refugees. He said that the real tragedy, however, is that the current conflict wouldn't exist without the previous war in Iraq.

"We must finally learn that wars do not solve people's problems, but instead make them worse," Gysi said.

US: 'No plans' to expand 'Islamic State' air campaign

The Pentagon has said it has no plans to expand airstrikes against the "Islamic State." Though airstrikes have slowed the jihadists' advance on religious minorities, the group has not been badly weakened. (11.08.2014)