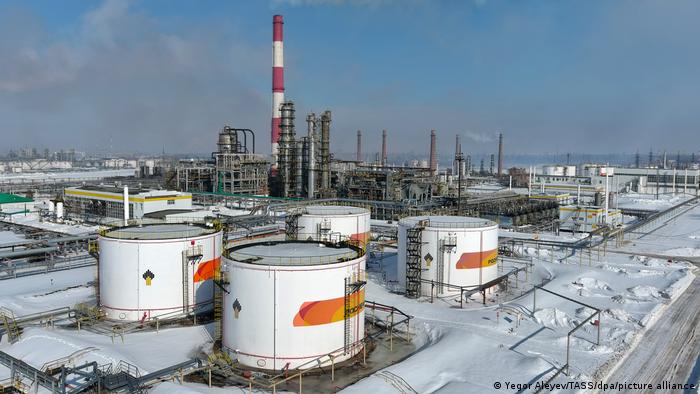 Representatives from EU member states gathered in Brussels on Friday to negotiate a possible gradual embargo on Russian oil imports.

In order to implement a Russian oil ban, all 27 EU members would need to support the policy.

What do we know about the ongoing talks?

Ukrainian officials have urged the bloc to enact the move, as the latest measure to harm the Russian economy. Yet some EU member countries are concerned that that such a policy would result in negative consequences for their economies.

"It's not easy to establish unity," European Commission President Ursula von der Leyen said in a conference organized by the German Frankfurter Allgemeine Zeitung newspaper. "The countries that are now hesitating are not yet ready. We are sitting together with these countries to work out pragmatic things, such as getting alternative oil to these countries."

Ursula von der Leyen: 'We will propose to ban all Russian oil'

Hungary and Slovakia, for example, are opposed to an oil embargo because of their dependency on Russian energy.

In an interview with state radio, Hungarian Prime Minister Viktor Orban said an embargo would cross a "red line" for Budapest and claimed von der Leyen "attacked European unity" in backing the policy.

Cyprus, Greece and Malta are also concerned about the idea of prohibiting the transport of Russian oil. The three countries have the largest shipping fleets within the bloc.

"It's necessary to take into account concerns of Greece, Malta and of course Cyprus in specific matters relating to the sanctions," Cypriot President Nico Anastasiades told journalists during a visit to Athens. The Cypriot leader met with Greek Prime Minister Kyriakos Mitsotakis during the trip and said this sentiment was a "common position" between the two countries.

"We are both clear," Anastasiades continued. "We are against the Russian invasion and of course in favor of sanctions. But these sanctions should be targeted and not selective in serving some member states and leaving others exposed."

Could a tweaked EU embargo plan address the concerns by member states?

EU sources told Reuters that the EU commission had tweaked its oil embargo proposal in order to address the concerns brought forward by member states.

The altered plan would reportedly allow Hungary and Slovakia to keep importing Russian oil until the end of 2024.

Why does Germany now support an embargo on Russian oil?

The tweaked proposal also reportedly includes a three-month transition before banning EU shipping firms from the transport of Russian oil to address the concerns by Greece, Malta and Cyprus. The original plan put forward a one-month transition.

Negotiations on the embargo could continue well into the weekend. Other ideas for sanctions reportedly under consideration include financial measures such as kicking Russia's Sberbank off the global SWIFT financial system.

Some EU diplomats want the new sanctions package to be enacted by Monday, when Russia celebrates its victory against the Nazis during the Second World War.