Will an EU oil embargo put the lights out at Schwedt′s refinery? | Business | Economy and finance news from a German perspective | DW | 03.05.2022

Will an EU oil embargo put the lights out at Schwedt's refinery?

As EU member states push for a Russian oil embargo, Germany's PCK Schwedt refinery is facing an uncertain future. It runs wholly on Russian imports, and many locals aren't so sure alternatives can be found in time. 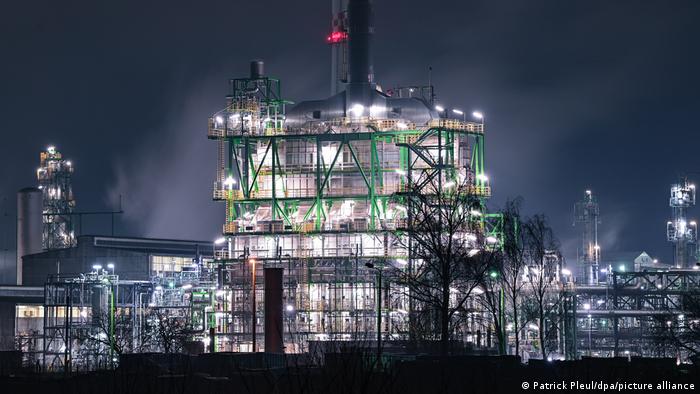 The Schwedt refinery, located some 100 kilometers (62 miles) northeast of Berlin, is used to facing troubled times. The plant, which since 1962 has always reliably received pipeline oil from the Soviet Union and later Russia, had no way of knowing whether it would survive at all when Germany reunited in 1990.

It did, but only after a thorough restructuring process, and not least thanks to the support of former Chancellor Helmut Kohl. The economic upheavals that followed German reunification left Schwedt with a jobless rate of 25% back then and triggered heavy social unrest.

Many inhabitants fear the same could happen again, should their refinery become a victim of a Russian oil embargo that EU member countries have firmly in sight as part of the latest sanctions package aimed at Moscow over its war in Ukraine.

Locals say that when the refinery, Schwedt's biggest employer, coughs, the whole town gets the flu. The specter of contagion is already running wild in the town located in the eastern German state of Brandenburg. Should oil supplies from Russia be banned, the days of the refinery could be numbered.

"I know from my friends who work at the plant that they're afraid of losing their jobs, so I can only hope policymakers in Berlin won't make any hasty decisions that would harm us here," a young woman told DW.

"The closure of the refinery would not just be horrible news for the people working there, but for the whole town," added the owner of a small food business in the town center. "We're talking about thousands of employees at the plant and various suppliers, and many of them are also my regular customers. If they leave in pursuit of a job elsewhere, I can just as well close my store, too."

Germany has been able to reduce its proportion of oil imports from Russia to just 12%, from 35% before the war in Ukraine began in late February. The PCK refinery is now the only remaining recipient of Russian oil in Europe's economic powerhouse.

Not the end yet?

Energy experts maintain that saying goodbye to Russian oil completely wouldn't necessarily mean the lights would have to go out at the refinery. They point out that Schwedt could also get oil from tankers via the Baltic Sea port of Rostock.

That could cover up to 60% of PCK's needs, with the rest probably having to come via the Polish port of Gdansk. The alternative supplies could involve slightly different oil grades, which would necessitate adjustments at the refinery.

"When talking about potentially required adjustments at the PCK plant, it's strange that some folks always exclusively mention oil grades that are not suitable for the refinery in Schwedt, like oil from Venezuela or Saudi Arabia," Steffen Bukold from the EnergyComment research and consulting agency told DW.

"But there are oil grades from many other countries that would be OK for the plant."

Confronted with that argument, many inhabitants of Schwedt express a good deal of skepticism. "This is what politicians say and try to make us believe," said one woman, who didn't give her name. "But organizing that amount of tankers and getting alternative oil here in time and on a regular basis would be a tall order, and the plant would most likely stop running at full capacity."

That could have a devastating impact on fuel supplies in a number of German states. Right now, nine out of 10 vehicles in Berlin, Brandenburg and Mecklenburg-Western Pomerania run on fuels made at the Schwedt refinery.

Using oil from countries other than Russia would in all likelihood lead to higher prices at the pumps, said EnergyComment's Bukold.

"It's likely that consumer prices for oil-dependent products will go up as a result of the energy market changes, that is if you need to look for other sources on the global market," he said. "But we're not talking about a 30% or even 50% price hike here, it'll be far more moderate."

But there's another big hurdle to clear before PCK Schwedt can even consider running the plant without Russian oil. The refinery is majority-owned by Russian state-owned company Rosneft, and it would be very surprising if it signaled any willingness to refine non-Russian oil. 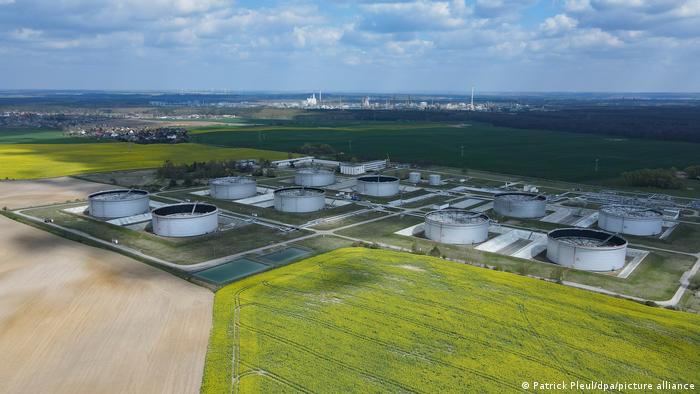 This is why the German government hasn't even shied away from debating the possibility of expropriation as a last resort. Berlin has recently approved legislation that will make it a lot easier for the state to take control of assets and companies classified as critical to energy supplies.

However, none of the Schwedt residents interviewed by DW was in favor of expropriating the refinery. "Two wrongs don't make a right," said the shop owner, referring to Russia's war in Ukraine and possible expropriation. "I wouldn't like the idea of someone coming along and seizing my assets just like that either."

There's no denying that Schwedt will have to live with a good deal of uncertainty for quite some time. As the town's mayor, Annekathrin Hoppe, put it: "I currently have more questions than answers."

Steffen Bukold makes a point of differentiating between the short-term and long-term prospects.

"I don't think that PCK Schwedt is on the brink of being shut down, with all the alternatives at hand, should an EU oil embargo be agreed on," he said. "But generally speaking, refineries processing fossil fuels will have to be on their way out anyway at a later stage, if we're serious about our climate protection goals."

Will an oil embargo make sense?