The European bloc is moving closer to banning Russian oil, with Germany changing course to support the embargo. But many questions remain open. 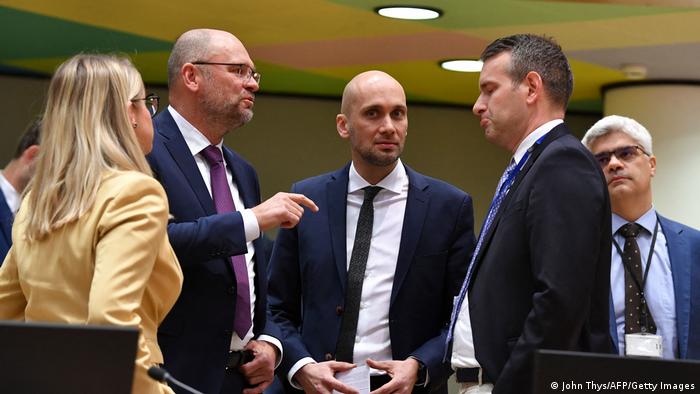 Slovakia and Hungary are heavily dependent on Russian oil

European Union energy ministers gathered in Brussels for an emergency meeting on Monday to discuss oil imports from Russia and seek a common response to Moscow cutting gas supplies to Poland and Bulgaria. Brussels has called the Russian move an attempt to "blackmail" the West for its opposition to Moscow's invasion of neighboring Ukraine.

In the biggest shift in sentiment to date, Germany announced it would no longer oppose an immediate ban on Russian oil imports.

The bloc's 27 member states have thus far shown varying degrees of willingness when it comes to cutting energy dependency on Russian coal, gas and oil imports, but Berlin's about-face means an oil ban could come into force within days.

Russia supplies the EU with 26% of its oil imports. The share of Russia's gas is even greater — 40% of the bloc's gas imports come from Russia, and several countries, including Germany, are heavily reliant on the energy source.

Leaders in Ukraine have lambasted EU countries for continuing to send hundreds of millions of euros in energy payments to Moscow every day, accusing them of willingly funding the war that has now entered into its third month.

EU to give more guidance on energy payments

The Kremlin cut gas supplies to Poland and Bulgaria last week after the two refused to bend to Moscow's demand that "unfriendly countries" pay for fuel supplies in Russian roubles.

The payment mechanism put forth by Moscow would see dollars and euros deposited into a bank run by Russian energy giant Gazprom, these would then be transferred into a second Gazprombank account and converted into roubles.

The plan has created confusion and calls for Brussels to clarify its stance regarding payment and sanctions infractions.

On Monday, the European Commission warned that complying with the scheme in full would be a breach of existing sanctions. At the same time, EU energy commissioner Kadri Simson promised more guidance on what was legally possible.

Though many EU countries see the necessity of capping Moscow's biggest revenue streams — and thus its ability to  shield itself from the impact of further sanctions — they also acknowledge risks to the bloc's economy.

Moscow's move 'obvious attempt' to sow division in the EU

Payment deadlines, the threat of recession due to rising energy costs and the thicket of legal compliance issues created by Western sanctions have put EU countries in a difficult position.

"Russia's demand on payments in roubles is an obvious attempt to divide the European Union. So we must respond in unity and solidarity," EU's Kadri Simson said prior to the meeting. Simson said ministers would discuss contingency plans for gas supply shocks.

Simson on Monday said Moscow's decision to punish Poland and Bulgaria showed that it was not a "reliable supplier."

"We appeal to countries not to support Putin's decree, not to support the initiative to pay in roubles," said Polish Environment Minister Anna Moskwa. She added that Warsaw would, "support full sanctions on all Russian fossil fuels. We already have coal — now it's time for gas and oil."

German Vice-Chancellor Robert Habeck has said Berlin will abide by Brussels' guidelines even if that means a harder hit to the country's economy. Germany, the largest economy in the EU, is also Russia's largest energy buyer.

"Germany is not against an oil ban on Russia. Of course it is a heavy load to bear but we would be ready to do that," Habeck told reporters Monday in Berlin.

More bank sanctions, a tapered energy ban and an exemption for Hungary

Sources say the European Commission will propose a tapered ban over six to eight months to give countries time to diversify their energy supply.

There has been talk, however, of offering Slovakia and Hungary — which has close ties to Moscow and has vowed to oppose a ban — an exemption in order to achieve unanimity among the rest of the 27-member bloc.

Beyond discussions on technical approaches to weaning EU economies off Russian energy — such as calls for an EU-wide energy savings mechanism put forth by the Republic of Ireland and Luxembourg — diplomats and European Commission experts are also working towards a proposal for a sixth sanctions package.

The package would, among other things, target Russia's largest bank, Sberbank, excluding it from the international SWIFT messaging system, according to diplomats in Brussels.

Moreover, EU ministers such as France's Minister of the Ecological Transition Barbara Pompili, have urged bloc members to take steps to "ensure our solidarity with our colleagues from Bulgaria and Poland."

According to the Centre for Research on Energy and Clean Air (CREA), a Helsinki-based think tank, EU countries have paid more than €46 billion ($47.43 billion) to Russia for gas and oil since it launched its invasion on Ukraine on February 24.