The Russian president's announcement that countries "unfriendly" to Moscow must pay for gas deliveries with rubles shows that he's willing to use energy as a weapon in the Ukraine war. It puts the West in a tight spot. Despite the Ukraine war, oil and gas have continued to flow because many countries have no alternative to Russian supplies

With his demand for payments in the Russian currency, Vladimir Putin has dealt a surprise blow to Western countries still using large volumes of Russian gas for their energy needs.

The measure would apply to a total of 48 country's deemed "hostile" and include the United States, the UK, and all members of the European Union, the Russian president said.

"I want to emphasize that Russia will definitely continue to supply natural gas in line with the volumes and prices and pricing mechanisms set forth in the existing contracts," Putin added, according to a transcript published on the Kremlin website on Wednesday.

Germany, the biggest buyer of Russian gas, said the announcement on ruble payments is a breach of the contracts, and the nation will speak to its European partners on how to respond, Economy Minister Robert Habeck said.

Skepticism meets Putin's demand that gas be paid in rubles

Putin testing the West on sanctions

Putin ordered his government and the country's central bank to flesh out the details and requirements for ruble payments. In addition, energy giant Gazprom was ordered to start working on needed amendments to current contracts.

Jens Südekum, a professor at the Institute for Competition Economics of Dusseldorf University in Germany, assumes Putin's move could have been an "indirect reply" to German Chancellor Olaf Scholz's recent remarks regarding Russian energy supplies.

"He [Chancellor Scholz] ruled out touching Russian gas deliveries because this would turn out to become too expensive for Germany," Südekum told DW. Südekum, who is also a member of a panel of scientists advising the German government, said Putin's reply probably is: "You want my gas? Then I set the terms."

Südekum urged European governments "to say no to Putin's plan," stressing that it would be "a very weak signal" if the West gave in. 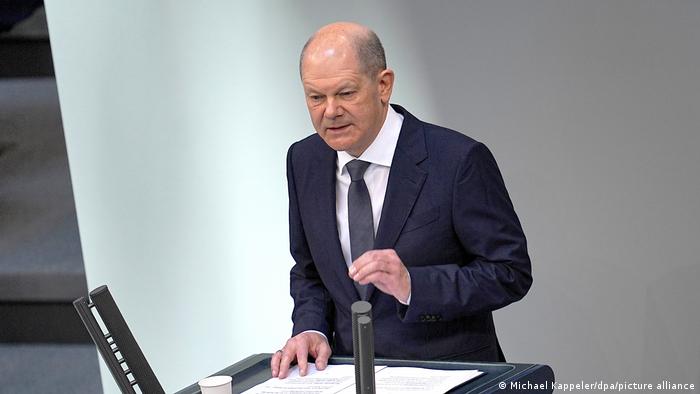 The measures, affecting virtually all countries that have imposed sanctions against Moscow, come as Russia is increasingly cut off from international flows of finance. This renders its vast reserves in dollars and euros basically worthless.

ING bank's chief economist, Carsten Brzeski, said that any attempt at trading currencies with India or China wouldn't help either because Russia simply can't make any payments to Western countries under the boycott. "Putin needs rubles to finance his war. In this sense it [the gas-for-ruble demand] is a smart move," Brzeski told DW.

Bank of Russia back in the game

Although the details of the new arrangement aren't clear yet, Putin's demand for payments in rubles essentially forces European companies to directly prop up the Russian currency after it was sent into free fall by sanctions. Earlier this month, the Bank of Russia was already forced to hike interest rates to 20% in order to halt the ruble's depreciation. Shortly after Putin's announcement, the ruble gained 7% against the dollar, trimming its losses this year to 23%

Putin's gas-for-rubles plan would also bring Russia's central bank back into the global financial system after sanctions have virtually cut it off from financial markets. "Putin would reinstall the central bank as a key player in the market because it is essential for paying gas bills with rubles," Südekum told DW.

Payments for Russian gas purchases are usually so large that the amount of rubles needed cannot currently be secured on foreign currencies' markets. Western buyers will most likely need to go via the Bank of Russia to make their payments, essentially undercutting sanctions against the Russian central bank.

Europe in a bind

According to the Kremlin website, Putin said "it makes no sense for Russia to supply its goods to the EU, the US, and others and receive payments in compromised currencies."

The statement implies that Moscow believes it can service its debts without the billions of dollars and euros from the West. Still, last week it was speculated that Moscow might have to default on some of its financial obligations due to a lack of foreign currencies.

Moreover, Putin's announcement brought back fears in Europe about the stability of Russian supplies. Benchmark gas futures gained as much as 9.8% on Thursday, after closing 18% higher the day before.

Russia provides about 40% of Europe's gas, and governments across Europe have announced massive financial aid to help their citizens with the burden of steeply rising fuel and energy prices.

BDEW said the national energy regulator needs to set criteria by which industry and other sectors of the economy would continue to receive supply, while household customers are protected under existing regulations.