If Europe is done with Russian energy, where will Moscow sell its oil and gas? | Business | Economy and finance news from a German perspective | DW | 07.04.2022

If Europe is done with Russian energy, where will Moscow sell its oil and gas?

Europe's days as Russia's best customer for energy appear to be numbered. Moscow will need to find new markets if it is to remain an oil and gas superpower, but its options are limited. 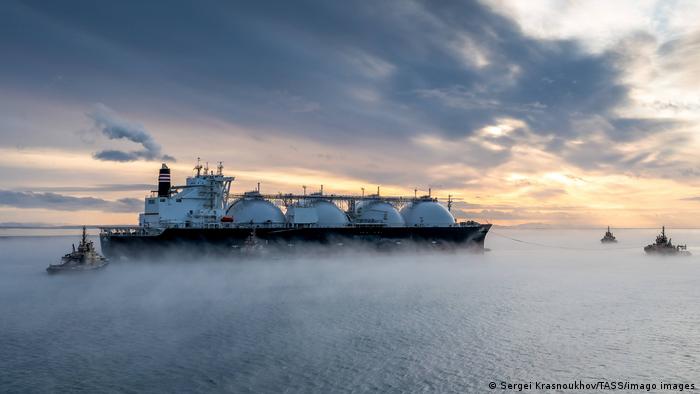 Where will Russian LNG tankers go in the future?

Russia is the world's largest exporter of natural gas and oil. According to the International Energy Agency, 45% of Russia's federal budget in 2021 came from oil and natural gas revenues.

The European Union has long been its best customer for both oil and gas. In the year ending October 2021, the US Energy Information Administration (EIA) says 49% of Russia's crude oil and condensate exports went to European OECD nations.

For natural gas, Europe's role as Russia's primary market has been even more pronounced — just under three-quarters of all Russian natural gas exports went to European countries in 2021, according to the EIA.

However, outrage over Russia's invasion of Ukraine and the growing evidence of war crimes committed by its forces there has prompted the EU to dramatically speed up plans to pivot away from Russian fossil fuels.

The speed and extent to which European countries such as Germany and Italy can do that, particularly when it comes to natural gas, remains a matter of intense debate.

But if the European Commission's plan for the bloc to be independent of all Russian fossil fuels "well before 2030" comes true, Russia will badly need some new customers.

Who will they be? Russia will likely focus on increasing sales to existing customers that have not imposed sanctions, such as China. In terms of oil, China is Russia's biggest non-European customer, accounting for the vast bulk of the 38% of Russian oil exports which were sold to countries in the Asia and Oceania region in 2021. 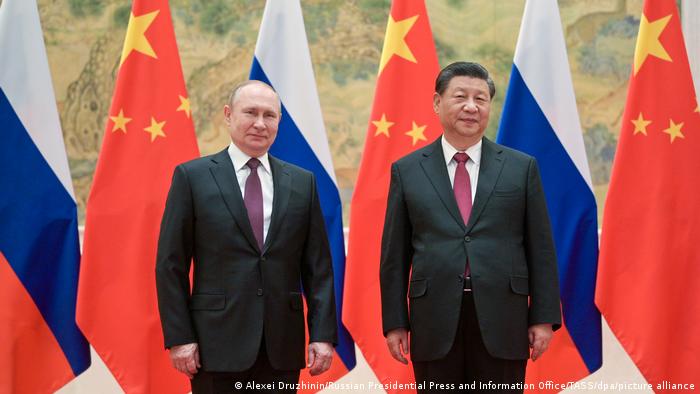 Russia is currently China's second-largest supplier of oil behind Saudi Arabia but experts believe a key goal of the Kremlin in the coming years will be to surpass its Middle Eastern rivals to become China's main provider of oil.

"The most interesting dynamic from the energy market perspective that we're going to be watching play out this year is how Russia tries to displace long-standing commercial relationships from the Middle East to East Asia," Fernando Ferreira, a geopolitical risk analyst with the Rapidan energy consultancy, told DW.

Another big target for Moscow will be to significantly increase the volumes it sells to India. The country of 1.38 billion is the world's third-largest consumer of oil, the vast majority of which it needs to import.

Iraq, Saudi Arabia and the UAE are India's biggest suppliers and in 2021, Russia accounted for just 2% of Indian oil imports. But that is already showing signs of changing. India has not condemned Russia's actions in Ukraine and in March and April, the country's purchases of Russian oil ramped up dramatically.

With Russia's crude now shunned by many Western nations, Indian refiners have been eager to buy it at heavily discounted prices.

Margarita Balmaceda, an associate of the Davis Center for Russian and Eurasian Studies at Harvard University, pointed out to DW that two large Indian oil refiners recently purchased a large cargo of Russian Sokol oil, which comes from Sakhalin Island, after several other countries and companies shunned it.

However, there are doubts over the extent to which countries such as China and India can ultimately replace European demand. 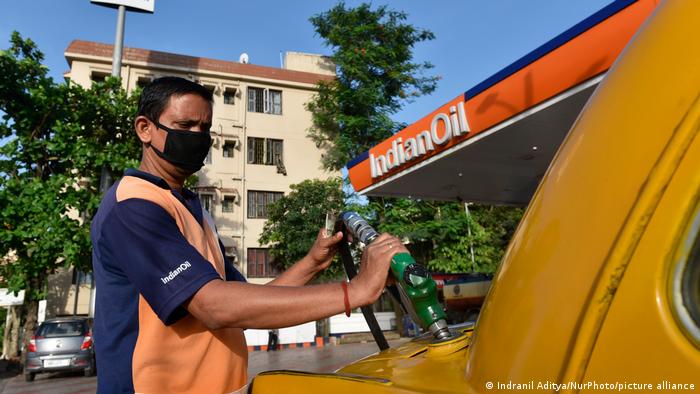 India is the world's third-biggest consumer of oil

An added problem that he foresees is how Western sanctions will impact Russia's capacity to buy equipment and technology needed for oil production. "Russia is going to be hard-pressed to keep up supply levels without access to Western technologies," he said.

However, Russia will find it much easier to find new markets for its oil than for its gas. Whereas it can physically move oil to new markets relatively easily, transit of natural gas through pipelines is inflexible, and Russia's LNG (liquefied natural gas) production capacity still lags far behind its rivals.

If Russia is to replace the European market for gas, its biggest bet appears to be placed on China. In February, Beijing and Moscow announced a 30-year contract for Russia to supply China with gas via a new pipeline. It was also agreed that the sales would be conducted in euros.

Russia has also established close ties on gas with Pakistan. Russia has agreed to build Pakistan Stream, a $2 billion (€1.8 billion) pipeline which will transport LNG from the southern port city of Karachi to the north of the South Asian country. Like its neighbor India, Pakistan has not condemned Russia's invasion of Ukraine.

However, Balmaceda says Russian rhetoric on the subject of switching gas volumes from West to East exceeds what is likely.  "The reality is that those projects need massive financing, and if there is no financing, they're not going to happen," she said. 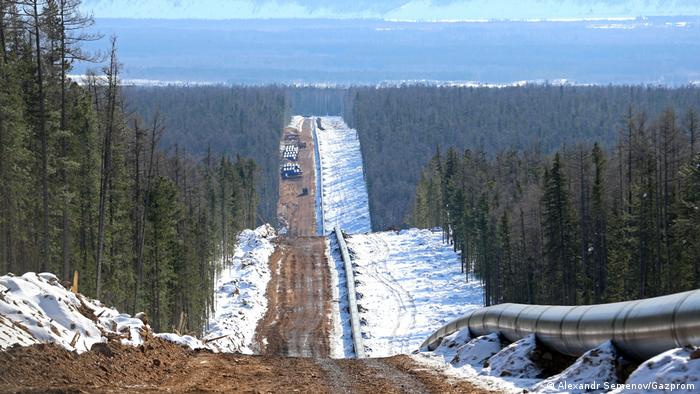 She adds that in theory, Russia could build new infrastructure to supply China or even India with gas in the future but that it would require "massive investment" which does not seem realistic given Russia's economic outlook.

Ferreira says that Russia's only realistic option for gas in Asia will be via existing or new pipelines between China and western Siberia. "That's going to take a while. So there is no short-term solution for Russian gas. You're going to have to shut it in," he said.

The long-term consequence, in his view, is that Russia will cease to be a major player on global energy markets.

However, Balmaceda, who recently authored a book on Russian energy titled "Russian Energy Chains: The Remaking of Technopolitics from Siberia to Ukraine to the European Union," is more doubtful.

She says Russian energy may even become acceptable again on European markets unless a strong enough coalition of interest groups opposed to Russian energy — for example, coal producers, renewable energy groups or LNG producers — can convince policymakers in the long term to stay away from Russian energy.

She cites the example of "sunk costs" — where money has been invested which cannot be recovered — as a concept some companies may point to regarding existing pipelines from Russia as an economic reason to persist with Russian gas. 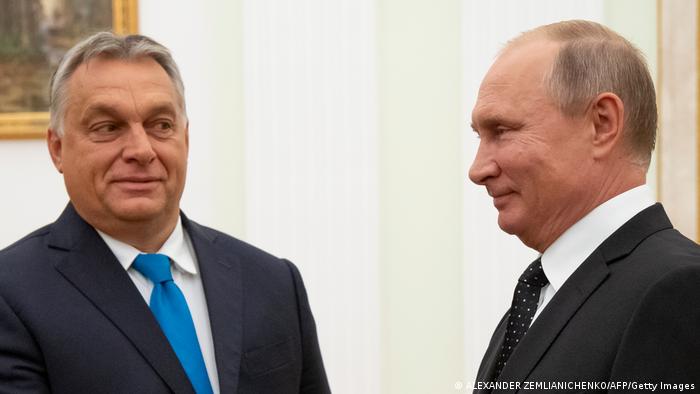 She warns that alternative energy options will need to be heavily invested in as soon as possible to convince governments and businesses to stick with them.

"For that constellation of interest groups to be able to withstand the temptation of Russian gas, it needs to be anchored infrastructurally in a way that the various economic actors have that incentive of those costs not to move away from that quickly."

However, she cautions that there are already clear signs that some central and eastern European nations such as Hungary and Serbia will be willing to buy Russian gas into the future.

Hungary signed a deal with Russia last year agreeing to receive Russian gas via pipelines that would bypass Ukraine, such as TurkStream, a gas pipeline connecting Russia to Turkey via the Black Sea. On Wednesday, Hungarian Prime Minister Viktor Orban said that Hungary was willing to accede to Vladimir Putin's demands that gas is paid for in rubles when a payment obligation to Gazprom comes up in May.

"These are relatively small countries but still, it is very disturbing that this is happening," she said.

Can Germany survive without Russian gas?

Experts are divided on how quickly Germany could cut imports of Russian energy and stop funding President Vladimir Putin's invasion of Ukraine. How vulnerable would such a move leave Europe's largest economy?

Gas is still flowing to Europe despite a Friday deadline for gas payments to be made in rubles. Germany has called this "blackmail" and insists on paying in euros or dollars.