Tensions stoke fears of a first strike against North Korea | Asia| An in-depth look at news from across the continent | DW | 05.04.2017

Tensions stoke fears of a first strike against North Korea

Repeated warnings have so far failed to veer Pyongyang off its missile development course. As regional tensions spike, some in the South fear they will be the biggest losers if fighting breaks out. Julian Ryall reports. 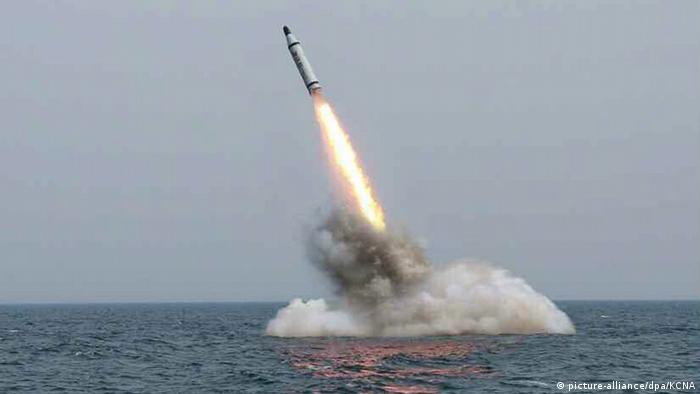 North Korea fired what appears to have been an intermediate-range ballistic missile into waters between the Korean Peninsula and Japan early on Wednesday morning. The launch further heightens tensions in the region shortly before US President Donald Trump is scheduled to hold talks with his Chinese counterpart Xi Jinping in Florida this week.

The South Korean government reacted by convening its National Security Council and ordering its troops to a higher state of readiness, while the Japanese government issued a strongly worded condemnation of Pyongyang's latest act of provocation.

But what grabbed the attention of many was the terse press release from the US Department of State, underlining the sense of resignation over the question of North Korea that appears to be gaining traction in Washington.

The statement read: "North Korea launched yet another intermediate-range ballistic missile. The United States has spoken enough about North Korea. We have no further comment."

There are some who say that the response, together with other comments coming from the administration, shows President Trump believes there is no other way to bring North Korea to heel other than the application of military force.

"Even in South Korea, there are a lot of people who fear that President Trump will do something as dangerous as a first strike against the North," said Song Young-chae, a professor in the Center for Global Creation and Collaboration at Seoul's Sangmyung University.

"It is not clear how dangerous this might be for the people of South Korea, but it is worrying," he told DW.

"If a first strike is a success and is able to neutralize all the weapons that Kim Jong Un has, then that would be good for us and the rest of the region," he said. "But if some weapons were well-hidden and not destroyed, or if the North Koreans could use them before they were destroyed, then they would probably fall on South Korea, which is extremely worrying."

Military analysts point out that the regime of Saddam Hussein in Iraq was able to conceal short-range tactical missiles from the US during the invasion of Iraq, and they stress that North Korea's terrain lends itself far more readily to the concealment of missiles and other weapons.

Learning from others' mistakes

Experts add that the North Korean military will have studied and learned from the mistakes of Saddam Hussein's military. As an added complication, the North has the largest per capita standing army - estimated at one million personnel - as well as stockpiles of chemical and biological weapons.

The US will "pressure" China to resolve the North Korea nuclear issue, Ambassador Nikki Haley has said. Secretary of State Rex Tillerson will chair a UN Security Council meeting on the rogue state later this month. (04.04.2017)

As he prepares to meet China's leader Xi Jinping, US President Donald Trump says his administration is ready to act unilaterally on North Korea. But analyst Günther Hilpert says the threat will amount to nothing. (03.04.2017)

There have been indications that the new US president's patience is wearing thin over an issue that has proved intractable to a succession of administrations in Washington.

On Sunday, in an interview with the Financial Times, Trump said China should resolve the issue of North Korea by using "the great influence" that it has over Pyongyang.

The American leader went on to add, "If China is not going to solve North Korea, we will."

And he is not alone in issuing such thinly veiled threats. In mid-March, Republican Representative Devin Nunes said in an interview with Fox News that a pre-emptive strike was under consideration.

"The closer that the North Korean regime gets to being able to deliver a nuclear weapon, we're going to have to be in a position to take some type of pre-emptive strike," he said. "We hope that it doesn't come to that. But this is an unhinged regime.

"At the end of the day here, something may have to be done because we can't afford to let a nuclear weapon go off in Seoul or Tokyo or the United States for that matter," he added.

Robert Park, a human rights activist who was held in North Korea for 43 days in late 2009, said in a column in The Korea Herald in mid-March that the result of a first strike against North Korea would be catastrophic.

"Without question, those who would suffer most horrifically through the direct consequences of such a strike would be Korean civilians," he said. "The South Korean government must be firm, forthright and unwavering in opposing the reckless and unhelpful scheme."

Park is a founding member of the Worldwide Coalition to Stop Genocide in North Korea, which warned in a statement to DW that "Seoul will be sacrificed" if a first strike should go ahead.

Other residents of the South Korean capital agree that the rhetoric on both sides is "unusually high," but they anticipate that cooler heads will prevail over the longer term.

A 'high level of tolerance'

"The South Korean people have a very high level of tolerance for the North's rhetoric, and that has served them well for decades," said Sokeel Park, director of research and strategy for the Liberty in North Korea NGO.

"It is new for a US government to act in a similar way, but I don't see people in Seoul going out and stocking up on rice," he said.

Professor Song said he certainly hoped that the present crisis might blow over instead of temperatures rising to the point whereby one side orders their military onto the offensive - although, like a good number of South Koreans, he has not always been completely opposed to the concept.

"It is too late now because the North Koreans have developed a lot of weapons and they are ready to use them, but there were opportunities in the past when the international community would have been able to carry out a first strike without the North being able to respond or retaliate," he said. "That would have been the time to launch such an attack."