German Chancellor Merkel was greeted by the eastern European leaders, a sign that the tensions of 2015 are subsiding. However, Merkel is expected to face tough questions from the alliance's leaders on a host of issues. 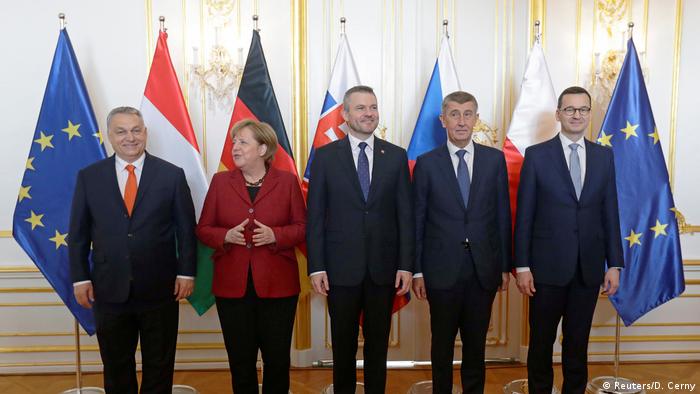 German Chancellor Angela Merkel met Slovakian Prime Minister Peter Pellegrini in Bratislava on Thursday, as well as the other leaders of the Visegrad group.

The group, which comprises Poland, Hungary, the Czech Republic, and Slovakia, was coming together to mark 30 years since the Iron Curtain came down.

"Thirty years ago, people in East Germany and the Visegrad states fought for freedom. The result was a united Germany. Thank you. We will never forget this contribution of the Visegrad Group," Merkel's spokesman Steffen Seibert tweeted.

Merkel's meeting with the Visegrad leaders was expected to cover a host of issues including migration and Russia's Nord Stream 2 Baltic Sea gas pipeline.

At a news conference ahead of the talks, Merkel promised that Germany would not become reliant on Russia for energy.

"Do we become dependent on Russia due to this second gas pipeline? I say 'no', if we diversify at the same time," she said.

In a DW exclusive, the US ambassadors to Germany, Denmark and the EU have urged Germany and France to ditch the project. They reiterated their position that the EU would become too dependent on Russia and would help fund what they see as illegal or questionable Russian activities.

Smiles and signs of friendship

As the meeting got underway, observers noticed the comradery between the leaders, something that has been lacking since deep divisions arose over the handling of the 2015 refugee crisis. Even Hungary's Viktor Orban, a fierce nationalist and longtime critic of Merkel's, welcomed her with a smile.

While the Visegrad nations and Germany might still not see eye to eye on migration, they tentatively agreed to work on a project together in Morocco to fight the conflict and poverty in northern Africa that prompts many people to become refugees.

Topics that could have increased tensions, such as a controversial conference on Middle East policy set to be hosted in Poland next week, were not brought up in public.

As the meeting was called to commemorate the fall of the Iron Curtain, Merkel also publicly thanked the other four nations. She said that their political shifts at the time had helped pave a smooth path for German reunification.

However, the Visegrad Group countries, especially Poland and Hungary, are still at loggerheads with Brussels on several issues.

All four members categorically reject the EU's plans to redistribute refugees across the bloc. Their rigid stand on the issue has delayed the much-anticipated reforms in refugee laws.

Warsaw and Budapest have often attacked Brussels for "undermining" their sovereignty.

Poland's Law and Justice party-led government has accused the EU of overstepping its authority by launching proceedings against it for restructuring its judiciary. The EU says the judicial reforms undermined the independence of the judiciary and the separation of powers in Poland.

Orban has called for a more decentralized bloc under the motto "Europe of the Fatherlands." The right-wing leader has been one of the most vocal critics of Merkel's refugee policy. Budapest's crackdown on media freedom, civil society organizations and courts has drawn the ire of Brussels.

Hungarians have handed Prime Minister Viktor Orban another term in office. A major thorn in the EU's side, his democratically legitimized autocracy will now become even more attractive to imitators, says Volker Wagener. (09.04.2018)