Tax incentives for insulation of German residential properties planned | Germany| News and in-depth reporting from Berlin and beyond | DW | 24.06.2017

German homeowners who install energy-saving insulation are to be granted tax concessions, according to a FAZ news report. The reforms would likely come after September's federal election. 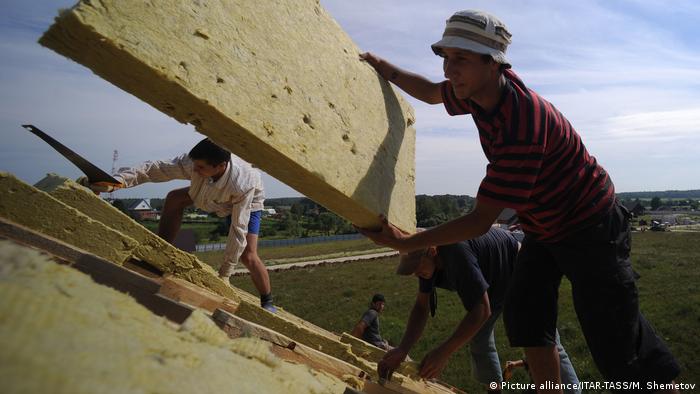 German Chancellor Angela Merkel has promised to introduce tax incentives for the installation of insulation in residential properties, according to a German newspaper report on Sunday.

Merkel told a construction industry audience that she would introduce the subsidies for building renovations for the sake of climate protection, according to the report in respected German daily Frankfurter Allgemeine Zeitung.

Merkel said the insulation subsidies would help tackle the "low hanging fruit" in the reduction of CO2 emissions.

The reforms were backed by Merkel's Environment and Construction Minister Barbara Hendricks, from Merkel's coalition partner party, the Social Democrats.

Hendricks told the paper she did not understand why parts of the coalition were "constantly on the brakes" over the issue.

The German insulation industry has been calling for the measures for years.

Industry figures told the paper the promise was a "strong, forward-looking" signal that would "finally give a long-needed tailwind" to energy-efficient renovations.

The reforms would likely come after September's federal election.

Households account for about 20 percent of greenhouse gas emissions in the European Union, according to official figures.

The EU pledged to improve energy efficiency by 27 percent and reduce greenhouse gas emissions by 40 percent compared to 1990 levels by 2030, with wealthy countries such as Germany, Sweden and France delivering the largest reductions.

The EU's 40 percent emissions reduction is split unevenly between economic sectors. Some sectors such as manufacturing, power generation and industry, are being regulated by the EU's Emissions Trading Scheme (ETS), and have to reduce emissions by 43 percent by 2030.

The remaining sectors not covered by the ETS (transport, agriculture and buildings) have an overall reduction target of 40 percent.

A recent survey of residents of Britain, Germany, France and Norway found most people supported policies to mitigate climate change by increasing sources of renewable energy and giving public subsidies for home insulation.

Germany is in the midst of a massive reform of its energy sector known as the Energiewende.

The program aims to shift the country from nuclear and fossil fuels to renewable sources of energy. The government says this transition will reduce security hazards and ensure Germany creates a greater share of its own power in future.

Last year the federal government announced 30 percent rebates on the cost of replacing heating pumps or optimizing heating systems, an initiative the Ministry of Economic Affairs and Energy said could help reduce energy consumption by up to 80 percent.

Merkel's promised insulation tax subsidies came at a tricky time for the industry. Scores of people died in a residential tower block in London last week, in a massive fire that was blamed on faulty insulation.

In the wake of that fire about 800 households were evacuated across the city due to concerns of about their retrofitted insulating cladding.In further investigations throughout Britain, 27 tower blocks in 15 local authority areas failed fire safety tests, it was reported on Saturday.