In a dramatic move, hundreds of people have been evacuated from five tower blocks because of safety concerns. Hundreds of buildings across the UK may have the combustible cladding that fueled the fire at Grenfell Tower. 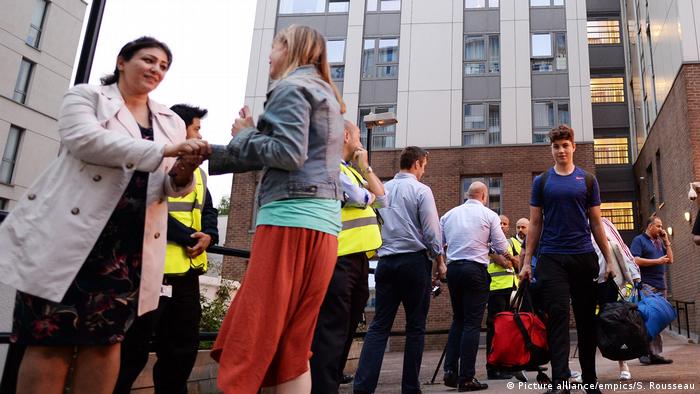 Some 800 households in London were evacuated from apartment buildings on Friday because of safety concerns after a deadly fire that killed 79 people in west London's Grenfell Tower last week.

Authorities in the London borough of Camden evacuated residents from five tower blocks with cladding similar to that on the Grenfell Tower after saying they could not guarantee the safety of the buildings. Officials said they were also concerned about the estate's gas pipe insulation.

The Camden Council local authority is urging residents to stay with friends or relatives but has promised to provide temporary accommodation. Work to replace the cladding could take up to four weeks.

"Grenfell changes everything and I don't believe we can take any risks," said Georgia Gould, leader of the Camden Council local authority, told reporters on Friday. "We could not be sure that people could be safe."

Residents responded with a mix of anger and fear after being abruptly told to evacuate the five Chalcots Estate towers on Friday evening.

One resident of the towers, Shirley Philips, told Sky News television she was given no notice.

"Why have they left it 'til half past eight on Friday night to start getting residents out? Where do they think we're all going?"

Michelle Urquhart, a resident in the Chalcots Estate's Bray tower, said it was "frightening" to think that she had lived in the flats for 10 years with the combustible cladding.

Reports on Saturday, however, suggested that dozens of Chalcots Estate residents had defied evacuation orders and returned to their homes.

Carl McDowell, 31, told the British Press Association that he took one look at the packed inflatable beds laid out in the center's gym and went back to his own apartment.

Camden Council leader Gould said that if residents had not left their homes after being visited by officials a second time on Saturday, "it will become a matter for the fire service."

The dramatic announcement came after London police earlier on Friday said both the insulation and tiles used in the cladding on Grenfell Tower had failed all fire safety tests conducted after the blaze.

Police Detective Superintendent Fiona McCormack said they were looking into whether the use of the two materials was illegal and were, therefore, considering whether to pursue manslaughter charges against those responsible.

"Preliminary tests show the insulation samples collected from Grenfell Tower combusted soon after the test started," McCormack said. "Given the deaths of so many people, we are considering manslaughter as well as criminal offenses and breaches of legislation and regulations."

The deadly blaze has stoked fears in the UK over how many other high-rise buildings are also covered in combustible cladding.

Prime Minister Theresa May's office estimated that as many as 600 high-rise buildings could be at risk.

Late Friday, she wrote on Twitter that her "thoughts [were] with residents being evacuated in Camden."

On Saturday the government confirmed that 27 high-rise blocks had already failed fire cladding safety tests. Safety officials are scrambling to assess the safety of hundreds of apartment buildings across Britain. Buildings in London, Manchester and Plymouth have already been found to be at risk.

May has also launched a public inquiry as well as a criminal investigation into the fire. Aside from the combustible cladding, it has also emerged that the west London council had ignored complaints from residents about safety violations.

McCormack also said the fire last week started in a Hotpoint fridge freezer but said the model had not been subject to a product recall. Nevertheless, the manufacturer was doing further tests, and the UK government has ordered an immediate technical examination of the model.

Whirlpool, which owns the Hotpoint brand, said it would cooperate with the government's inquiry into the blaze.

"We are working with the authorities to obtain access to the appliance so that we can assist with the ongoing investigations," the company said in a statement. "Words cannot express our sorrow at this terrible tragedy."

As previously suspected, the fire was not started intentionally.

With the appliance reportedly located close to an open window, the fire spread to the outside of the building before swiftly spreading upwards and consuming the 24-storey tower block.

At least 79 people were killed in the blaze, although the number could still rise. Police on Friday said they had removed every "complete" body found in the charred remains of the tower, although forensic research would likely continue until the end of the year.

However, the precise number of casualties may never be known. McCormack called on anyone with information on who might have been in the tower to come forward.

"What we haven't got is a picture of how many people might have been in there," said McCormack. "That's the number I'm really worried about."

McCormack's comments followed a pledge by London Mayor Sadiq Khan to seek an amnesty for people who may have been living in the tower illegally.