In a major boost to Germany's slow efforts to generate electricity offshore, one of the country's biggest utilities, RWE, plans to erect 150 to 180 turbines off the German coast to create a 960-megawatt wind farm. 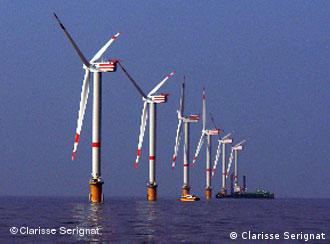 RWE's North Sea project, sited 40 kilometers off the coast where the Netherlands and Germany are neighbors, would be the biggest in Germany waters, RWE said at its head office in Essen on Friday, Dec 19.

"This quantity is enough to supply electricity to at least 780,000 households," RWE said.

The company is in negotiations with German wind-turbine company Repower, mainly owned by Suzlon of India, to build the towers, each with a capacity of 5 to 6 megawatts.

RWE has taken over the project from a smaller company and has renamed the farm "Innogy Nordsee 1."

Building far out at sea

The water in the 150-square-kilometre zone, 40 kilometers north of the North Sea island of Juist, is 26 to 34 meters deep.

RWE said German rules force it to build further out to sea than in another nations which use offshore wind.

Experts say the long distances, deep waters and a lack of sufficient electricity networks make the endeavor at least 2 to 3 times more expensive than on land.

The first wind turbines should start running as early as 2011, the company said. The total investment for the project would be around 2.8 billion euros, RWE chief executive Juergen Grossmann said.

With its estimated 19,500 onshore windmills producing 23,000 megawatts of energy, Germany’s wind energy sector has seen exports boom in recent years as the demand for wind turbines rockets around the world.

Last year, the industry created 8,000 new jobs in the country, increasing its total workforce to more than 80,000.

Yet the country, famed for its green credentials, has held back from taking the plunge into offshore wind technology -- increasingly accepted around the world as a renewable source of plentiful amounts of clean energy.

So far, 19 smaller offshore farms have been approved, but work is only just starting on the first of them.

Experts have largely blamed a combination of spiraling costs for steel and copper, risk-averse investors and a still infant offshore technology for Germany's reluctance.

Germany has grand plans to build its first ever offshore wind farms in the North and Baltic Sea, a project that energy experts warn still has a long way to go in meeting formidable financial and technical challenges. (14.07.2008)

For the second time in as many games, Jamal Musiala was Bayern’s standout performer. The teenager enjoyed himself in the victory against Wolfsburg and looks to be central to Julian Nagelsmann and Hansi Flick’s plans.

More than forty people have been killed in a fire at a Coptic church in Giza, Egypt's second largest city. The building was packed with worshippers as the fire broke out. Many were trapped inside the four-storey building.