EU Agrees to Expand Use of Renewable Energy | Europe | News and current affairs from around the continent | DW | 09.12.2008

European Union delegates have laid the groundwork for new law that would boost the use of renewable energy sources to 20 percent of total consumption by the year 2020. 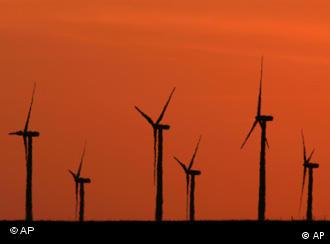 Europe will be needing more of these to meet its target

The deal agreed Tuesday, Dec. 9, in Brussels is part of a larger EU climate plan that also aims to cut greenhouse gas emissions by 20 percent and reduce energy consumption by 20 percent over the next decade.

EU leaders will fine tune the total package on Thursday and Friday at a bloc-wide summit.

Significantly, negotiators -- including delegates from the 27 EU member states, the EU Commission and the European Parliament -- also reached an agreement on the use of biofuels. Officials said the new law should stipulate that 10 percent of the EU's total energy needs is supplied through plant-based biofuels.

The issue of biofuel quotas has been a bone of contention with some environmental and humanitarian groups, which say over-zealous biofuel production could cause massive deforestation and lead to food shortages. 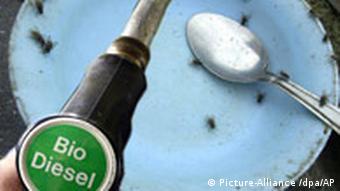 Critics are concerned biofuel production could lead to food shortages

To take those concerns into account, EU officials and parliamentarians agreed to a set of rules aimed at making sure that only environmentally-friendly biofuels are counted towards the overall target.

In January, the European Commission had proposed a law setting individual targets for each member state to boost its use of renewable energy as a way of meeting the overall EU target.

Tuesday's agreement, while still needing ratification by EU member states and the full European Parliament, gives a strong political impulse to that proposal.

However, in deference to member states' wishes, it also includes a number of clauses which would give those states credit for supporting renewable-energy projects in other countries. Italian investment, for example, could finance a wind power project in Germany, or even outside the EU, and Italy would still gain credit toward its national targets.

The accord follows a separate agreement made last week to cut emissions in new cars starting in 2015.

Green groups currently in Poznan, Poland, for a two-week UN climate summit widely approved of the agreements made in Brussels. However, they were unhappy with one component of the plan, known as effort sharing.

This part of the plan calls for energy reduction targets in sectors not covered by trading in carbon emissions, including agriculture, transport and private households.

"This proposal, steered by the self-interest of EU member states, sets the bar far too low," said the coalition, as quoted by AFP news agency.

Opposition from some EU members 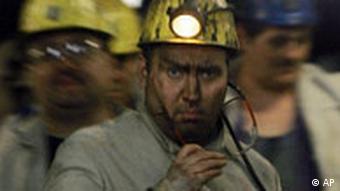 There is a strong coal tradition in much of Europe

The EU's climate package has in recent weeks also come under fire from its member states that depend the most on coal.

Poland and other EU newcomers from central and eastern Europe want credit for reducing CO2 emissions in the 1990s, when their highly-polluting communist-era industries collapsed. They've also demanded the EU pay more attention to the economic situation in less affluent member states.

In addition, Italy has demanded that the climate goals be reviewed half-way, in 2014, a move some say could threaten investment and jobs in alternative energy sectors.

The final climate deal is set to be agreed Thursday and Friday at the Brussels summit.

Chancellor Angela Merkel has been keen to promote herself as a tough actor on climate change, but with a new EU climate deal in the making, she's issued a new caveat: It must not jeopardize German jobs. (08.12.2008)

European Union leaders meet this week in Poland to discuss fighting climate change. But as the EU seeks to slash greenhouse gas emissions, Polish coal miners are worried -- and defiant. (29.11.2008)