Revolution Chemnitz: Why a German neo-Nazi group was charged with terrorism | Germany | News and in-depth reporting from Berlin and beyond | DW | 02.10.2018

The seven neo-Nazis arrested in the German state of Saxony are facing more serious charges than previously expected. After some bad press, German prosecutors are now much quicker to reach for terrorism charges. 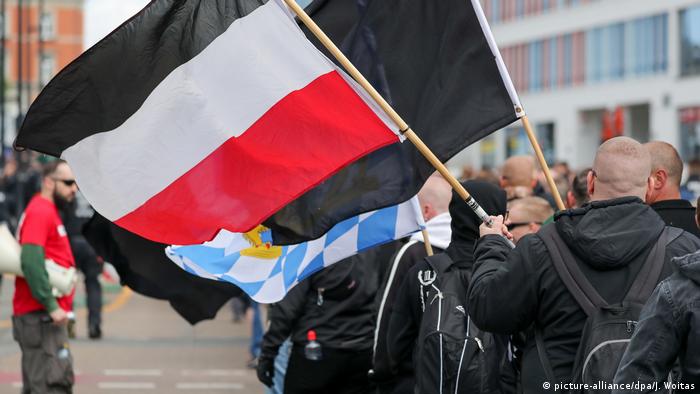 For many, the escalation seems incredible, or — for right-wing social media trolls who have grown mistrustful of the state — even implausible. Members of a far-right "vigilante" group arrested in Chemnitz in mid-September for breaching the peace were arraigned this week on suspicion of forming a terrorist organization calling itself Revolution Chemnitz.

Prosecutors' spokesperson Frauke Köhler said on Monday that Revolution Chemnitz had been planning an attack on foreigners and "people with differing political views" on October 3, Germany's Unity Day holiday. Indeed, Köhler said, there was evidence that the mid-September incident had been a "practice run" for October 3, which suggested that the authorities had swooped in just in time.

"The communications showed that the suspects had already tried intensively to acquire firearms," Köhler said, though police had "only" seized a collection of batons and an air rifle during Monday morning's raids. The group had wielded weighted knuckle gloves and an electroshock weapon in the September attack, when one person was injured.

The prosecutor's reaction appeared to show that Germany's security authorities are beginning to reassess the threat posed by the country's neo-Nazi subculture. To justify why Revolution Chemnitz should be considered a terrorist organization, rather than merely a gang of vigilante criminals, the federal prosecutors' statement mentioned that the communications showed the group's aim was "the overthrow of the democratic rule of law" based on their right-wing extremist ideology.

Little is officially known about Revolution Chemnitz other than what was in Monday's two-page statement: They were all German men aged between 20 and 31, and they were all members of the "hooligan, skinhead, and neo-Nazi scene" in the Chemnitz area.

They were also formed very recently — at the latest on September 11 — which suggests the group sprang up in the aftermath of the killing of a German-Cuban man in late August, when Chemnitz saw a series of far-right demos and counterdemos and a huge anti-racism rock concert. "The events in Chemnitz appear to have been a trigger — that this was the time to mount an attack," said Florian Hartleb, political scientist and specialist in the effects of populism.

Hartleb also supported using the term terrorism in this case, since that included "when a political message is being sent out, when it's about 'liberating a fatherland,' and when the choice of victims is aimed at an ethnic minority." 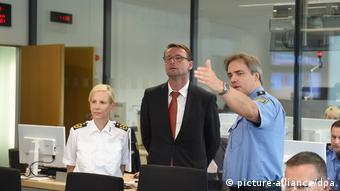 That authorities in Saxony may be reassessing the far-right threat is evident elsewhere, as well. Saxony Interior Minister Roland Wöller announced on Monday that the state was forming a new police "task force" to support local law enforcement against far-right violence.

Meanwhile, local press reports have found that at least one of the members of Revolution Chemnitz, named only as 30-year-old Tom W., was no stranger to the judicial system, but had previously got away with relatively light sentences.

The Sächsische Zeitung newspaper reported that Tom W. was a former leader of the now-banned neo-Nazi group Sturm 34, formed in 2006. Named after a squadron of Adolf Hitler's paramilitary organization Sturmabteilung (SA), Sturm 34 included some 50 members who were linked with 70 crimes in 2007 alone.

Despite being convicted of being ringleader of a criminal organization, Tom W. was eventually handed a two-year probationary sentence in 2012 by a youth court — a circumstance that has reinforced suspicions the authorities in Saxony rarely took the neo-Nazi scene seriously.

Both the socialist Left party and the Green party in Saxony have now called for more consistent and tougher action against the far right. The political scientist Hartleb is also convinced that German authorities do have a problem interpreting certain actions as far-right terrorism — pointing in particular to a Munich shooting in 2016 that police were reluctant to label as a far-right act.

He also noted that Revolution Chemnitz is the third such group that has been rounded up since the discovery of the National Socialist Underground (NSU) in 2011 — the other two named were the "Oldschool Society" and the "Gruppe Freital."

Nevertheless, to complete the impression of a sea change, Saxony police will have to counter persistent suspicions of far-right sympathies in its ranks. Last weekend, it emerged that two elite police officers assigned to protect Turkish President Recep Tayyip Erdogan had given themselves the codename Uwe Böhnhardt, the name of a dead NSU member. They are facing disciplinary action.

A recent report has shown most journalists are attacked while photographing, filming or holding cameras. Much of Germany's violence against the press happens in the east and most perpetrators lean to the far-right. (20.09.2018)