Germany's state prosecutor has ordered the arrest of seven men charged with forming a far-right terror group known as Revolution Chemnitz. The men are accused of planning attacks on migrants in eastern Germany.

Some 100 police officers raided several properties in the German states of Saxony and Bavaria early on Monday morning as part of an investigation into a terror group called Revolution Chemnitz, named after the eastern German city that was the scene of recent far-right demonstrations following the killing of a German man.

The six men arrested, aged between 20 and 30, are suspected of forming a terrorist organization under the leadership of 31-year-old Christian K., who had already been arrested on September 14.

According to Germany's state prosecutors, the men were planning attacks on "foreigners" and people who did not share their political views. Batons, an air-rifle, and computer hard drives were seized during the raids.

Investigators said the group had tried to acquire semi-automatic firearms, and on September 14 five of the seven suspects, including Christian K., had taken part in a coordinated attack on foreigners in Chemnitz using glass bottles, weighted knuckle gloves, and an electroshock weapon. One man was injured during the incident, which resulted in a number of arrests.

Investigators said there was evidence this had been a "practice run" for a larger attack planned for October 3, a national holiday celebrating Germany's reunification. 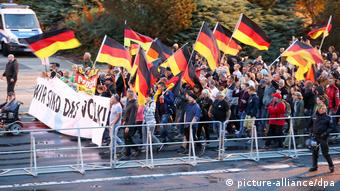 The prosecutors' statement said the six men were all members of the "hooligan, skinhead, and neo-Nazi scene" in the Chemnitz area, and all considered themselves leading members of the far-right scene in Saxony. Prosecutors believe the group's aim was "the overthrow of the democratic rule of law" based on their right-wing extremist ideology.

All seven men are due to be arraigned in a federal court on Monday and Tuesday. A spokeswoman for the federal prosecutors, Frauke Köhler, said on Monday that they would be joining forces with Saxony counterparts to investigate "far-right structures" in the state.

Köhler said prosecutors had decided to upgrade the investigation from a criminal to a terrorist one after assessing the group's internal communications, which showed they had been planning attacks and working to acquire weapons.

The eastern German city of Chemnitz was the scene of several confrontations in late August and early September, after a German-Cuban man died from stab wounds following a fight with two asylum-seekers from Syria and Iraq. The Iraqi suspect was later released.

The death triggered a week of occasionally violent far-right demos and counter-demos, culminating in an anti-racism rock concert that drew a crowd of over 60,000 people. Köhler said the investigators had not yet established whether the suspects were involved in the far-right demos in Chemnitz.

The events have reignited tensions in Germany over the influx of refugees three years ago, with violence involving migrants attracting massive media attention and subsequent political fall-out: The head of Germany's domestic intelligence agency, Hans-Georg Maassen, lost his job after publicly questioning the authenticity of videos showing migrants being attacked in Chemnitz.

Germany's failure to address the threat of neo-Nazi violence was brought into sharp relief earlier this year with the end of the five-year trial of Beate Zschäpe, a member of the National Socialist Underground (NSU), a neo-Nazi cell that murdered at least ten people over an eight-year period in the 2000s. Zschäpe was sentenced to life in prison in July.

The NSU remained undetected largely because of systemic investigation failures by German police and intelligence agencies.

On Monday, German Justice Minister Katarina Barley said, "We learned from the crimes of the NSU that we have to be much more alert than before. That goes for the security forces and the judiciary, but also for the whole of society."

Interior Minister Horst Seehofer welcomed the arrests. "This is the realization of our principle, 'zero tolerance towards right-wing radicals and far-right extremists'," he told DPA news agency in Munich. "The threat of terrorism remains high in Germany, which means that we have to be prepared for an attack at any time."