The suspects targeted foreigners at a park, injuring a 26-year-old Iranian man. The coordinated action followed another far-right demonstration in the eastern German city. 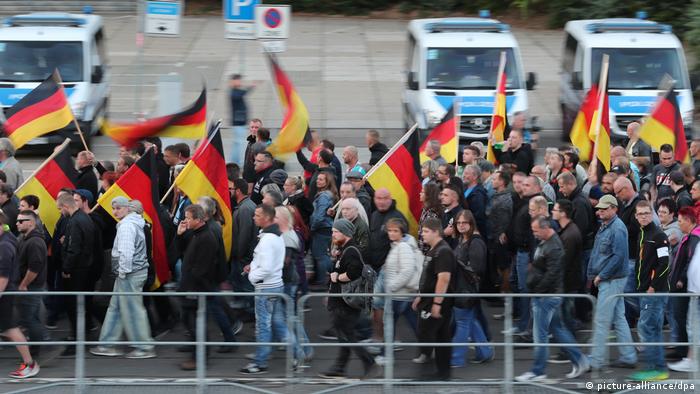 Just two weeks after far-right riots rocked the city of Chemnitz, members of a group of self-described "vigilantes" were taken into custody for targeting foreigners in the eastern German city. The group of about 15 men was accused of disturbing the peace and causing bodily harm, prosecutors said on Saturday.

The detentions were based on events that took place on Friday after a large far-right rally, in which as many as 3,500 people gathered under the city's iconic monument to Karl Marx and marched through the town center.

According to authorities, the men allegedly set out to harass foreigners in a city park on Friday night. They first targeted a birthday celebration, ordering anyone they deemed did not look German to show their identification papers. The partygoers, who were said to be young people of foreign descent, fled the scene and called the police.

Later, the vigilantes approached another group at the park and allegedly hurled xenophobic insults at seven people of different nationalities. In the encounter, the suspects injured a 26-year-old Iranian man, who suffered a laceration to the head.

Police later arrived and arrested the group. Nine of the suspected assailants were eventually released, while six others, aged 27 to 31, remained in custody as the investigation proceeds. One of the men already had a suspended sentence at the time of the arrest.

Chemnitz has been the battleground of protests and counterprotests since three foreigners were thought to be involved in the death of a 35-year-old German-Cuban man during a street festival. The fatal stabbing triggered far-right riots, which led to a national debate about xenophobia in Germany and the police response to far-right violence.

Building on the momentum from Chemnitz, the small eastern town of Köthen has also become the stage for a series of right-wing rallies. Last week, a 22-year-old German died, a result of injuries he received during a fight with two Afghan men.

Anti-immigrant demonstrators staged yet another event in Köthen on Sunday, but this time they were met by anti-racist protestors who gathered in the town square. Police were on hand to keep the two groups apart, fearing an outbreak of violence similar to that in Chemnitz. There were 1,000 officers on hand in a town of 26,000 people.

A social media campaign is aiming to redress the perception that eastern Germany has fallen for far-right populism. The blogger Stefan Krabbes has started "the other East" hashtag, taken up enthusiastically on Twitter. (14.09.2018)

A 33-year-old has been convicted of hate speech and assault after displaying a banned Nazi greeting at a far-right rally. The district court in Chemnitz is fast-tracking trials related to the recent unrest in the city. (13.09.2018)