A concert to protest neo-Nazi violence has drawn a massive crowd in Chemnitz. But as impressive as it was, it still doesn't negate the fact that thousands of people fear their country is being overwhelmed by migrants. 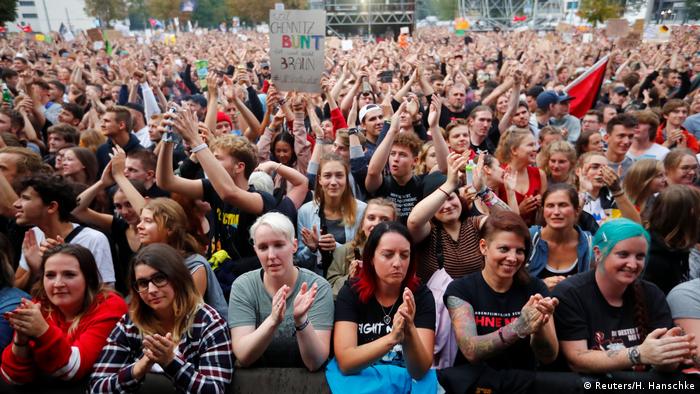 Tens of thousands of mostly young people packed a square in the eastern German city of Chemnitz on Monday evening, spilling across a major intersection and into the streets beyond to attend a rock concert in support of refugees.

The slogan of the concert was "Wir sind mehr" ("there are more of us," or literally, "we are more"), reflecting organizers' ambition to attract greater numbers than the thousands who turned out at anti-refugee protests sponsored by the populist Alternative for Germany (AfD) party and other right-wing groups last Saturday. The concert, which featured six well-known rock, punk and hip-hop acts from Chemnitz and beyond, had to be moved from its original location because the number of attendees exceeded expectations.

'We are more' concert to send signal against racism: Linda Vierecke from Chemnitz

Organizers said they wanted to show that "there is no place in Chemnitz for Nazis," as the event kicked off on Monday evening. The expected turnout of around 30,000 appeared to be a drastic underestimate. Somewhere between 50,000 and 65,000 people attended the event.

Left versus right — or maybe not

A far more festive atmosphere was evident on the streets in Chemnitz than in past days, when sadness and tension dominated the air. The six acts involved said that they agreed on setting up the open-air gig within the space of 24 hours, because they want to show support for a tolerant Germany.

"This is not about the fight between right and left, it's about basic decency," said singer Campino of the headline act, Die Toten Hosen. 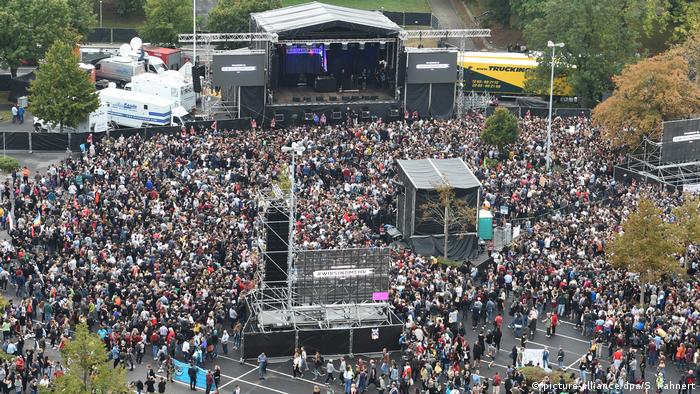 Early estimates put the turnout at around 50,000

But other performers struck a different tone. Singer Monchi of the explicitly left-wing band Feine Sahne Fischfilet said the musicians were making a statement against "the right-wing mob" who he said welcomed the murder of Daniel H. as a chance to advance their agenda.

A visibly moved Felix Brummer of the group Kraftklub, who themselves hail from Chemnitz, said the point was to show solidarity.

"We're Chemnitzers, and we'll still be Chemnitzers when all of the cameras are gone," Brummer told reporters. "Sometimes it's important that people simply don't feel as though they're alone."

Read more:  Opinion: To understand Saxony, look at its history

A moment of silence before the big noise

There has been unrest and competing protests in the city since the stabbing of a local man, Daniel H., allegedly by a Syrian and an Iraqi national, on August 25. Concert organizers and refugee activists say the political right in Germany have instrumentalized the man's death. The family of Daniel H. has distanced itself from right-wing memorial events.

The concert began with a minute of silence for Daniel H., and volunteers collected donations to be split evenly between his family and anti-racism initiatives in Chemnitz.

"People have been really generous," one of the collectors told DW. "Even those who don't seem like they have a lot of money have been chipping in."

Then the music started. The crowd was young and, in the main, not from the city itself. Concertgoers said they had come from hundreds of kilometers to take part.

"I'm from Düsseldorf," one young woman said, referring to the western German city more than 500 kilometers from Chemnitz. "I was horrified by the pictures of Nazis running amok in the streets here. I just felt like I hand to stand up for what was right."

To judge from their t-shirts and hoodies, no small number of the crowd were also fans of the bands putting their talents on display for free. But that only added to the spectacle, which had the Chemnitz downtown completely in its thrall for the better part of five hours. The crowds dwarfed those of either the right-wing protest or the counterdemonstration. In that respect, "Wir sind mehr" more than lived up to its name.

The real tests still to come

Fittingly, given the enormous crowd and the public transportation chaos that resulted when the masses tried to leave the city center, the final song of the evening was a rendition by all the bands of "You'll Never Walk Alone."

"If this evening stays non-violent," the football-loving Campino told his fans, "then it's a 5-nil win for us."

Despite some fears of reprisals from the right, the evening did indeed stay peaceful. But the real challenges lie ahead. Impressive as it was, a huge turnout for what amounted to a free open-air festival doesn't negate the fact that thousands of other Germans took to Chemnitz's streets on Saturday to protest against what they fear to be their country being overwhelmed by refugees and migrants. Those people are, of course, equally convinced they're in the right as the throngs of young people who chanted "Nazis out" and "Refugees welcome" on Monday.

Ultimately, the question of which side is greater in number will be decided when Saxony votes in regional elections in a year's time. That poll will have massive implications for Germany as a whole, and in particular for Chancellor Angela Merkel's welcoming stance toward migrants.

Right now, most residents of Saxony are probably happy that the intense media scrutiny is likely to subside. For the past eight days, this medium-sized, post-industrial city served as a battlefield in a cultural struggle in which everything down to the brand of sneakers or sweatshirt people wore was fraught with political significance.

"Take it easy, guys, and see you next time," called out one concertgoer to some newly made acquaintances as he was driving away in his car.

Many residents of Chemnitz, one suspects, hope that the next time is one that doesn't come for quite some while.