DW reporter Ben Knight covered the recent right-wing demos in Chemnitz and Köthen, and had many exhausting conversations with far-right demonstrators. Should he have called them all Nazis? 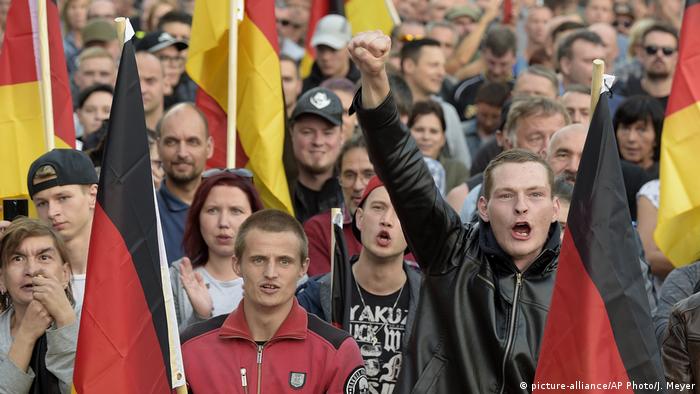 I've been all over eastern Germany in the past few weeks, chasing Nazis. Like a lot of other journalists, I was sent to see the crime scenes and the countless demos and counterdemos in Chemnitz, Köthen and Schönberg, quiet towns that never usually make the domestic news in Germany, let alone become Twitter hashtags and worldwide symbols for division and hate.

For years now, the political debate about refugees in Germany has been feverish, so it was inevitable that hysteria would take hold when asylum-seekers from the Middle East allegedly killed people in Saxony and Saxony-Anhalt, states where far-right populists had already made massive political inroads.

But still, some of the sights were disturbing: I saw neo-Nazis mixing with weeping mourners, clutching flowers in their tattooed fists, far-right populists laying huge wreaths in small pools of plastic candles in a playground; I saw people, having no official anti-Nazi counterdemo to join, confronting whole crowds of seething protesters on their own, quivering with fury and fear as they got into shouting matches with racists in a circle of cameras and microphones.

Sometimes the press does its job of dramatizing all this a bit too well. Returning to the office in Berlin, colleagues would treat me as if I'd been reporting from Aleppo, and I read editorials that told me that what I'd just witnessed represented the reawakening of German fascism, and that to call the people who joined the demos anything other than Nazis was a capitulation, or a "normalization." 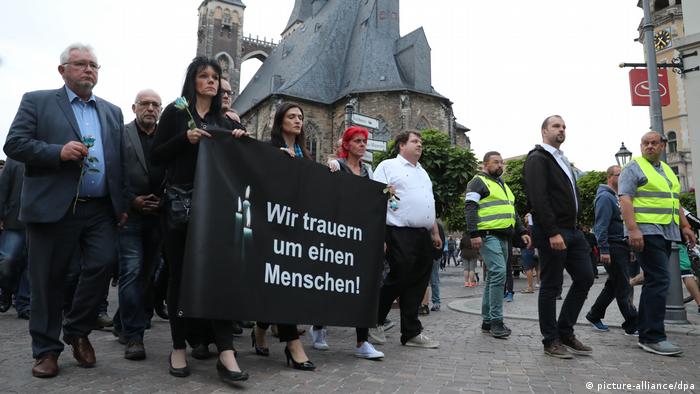 The elitist versus the Nazi

I can't disagree — people who march along with Nazis have no right to complain if they're also called Nazis. The press has to call it as it sees it. But having talked to a lot of the people in the marches organized by far-right groups like Pro Chemnitz and the Alternative for Germany (AfD), I also knew how they would react to such editorials — in fact, how they did react when I went to Köthen earlier this week. The reason why we think of them as Nazis, one man there told me, was because I was "an elitist from the state-supporting media."

This man, who had grown up in communist East Germany, went on to explain that I was no different from the party propaganda stooges from those days, and that my "boss," Chancellor Angela Merkel, was just a new version of GDR dictator Erich Honecker. (Side-note: He was part of a group that I had already seen in Chemnitz and that regularly traveled between protests in the area — the active far-right in Germany is actually more thinly spread than it might appear.)

Maybe I should have just called him a Nazi and walked off. Maybe my friends in Berlin will be disappointed that I didn't. But I didn't. Partly because it was dark and there were a lot of moody-looking people with shaved heads standing around, partly because he was perfectly friendly (but then, I am white), and partly because it would've been pointless: firstly because he thought I thought he was a Nazi anyway, and secondly, where would it have got us? 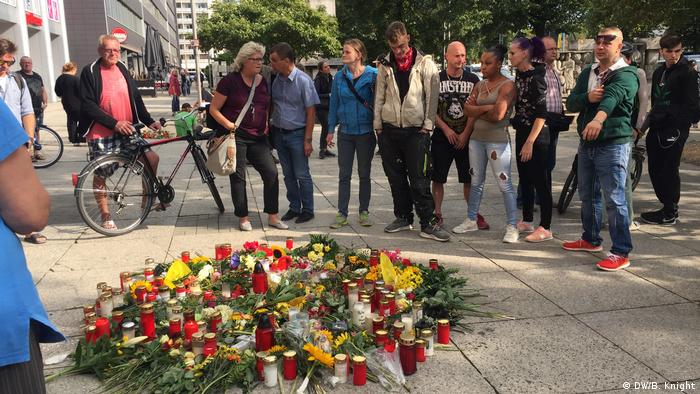 Mourners mixed with protesters in Chemnitz

No one thinks they're racist

It's hard to comprehend the lengths to which people will go to deny that they're racist, let alone a "Nazi." When German people hear that word, a small bomb of outrage goes off in their heads and they're unable to hear anything else.

Hardly any Germans really consider themselves part of the subculture known as Nazi, so when PEGIDA supporters hear the word applied to them they simply tune it out — all it means is that the person telling them so has been indoctrinated by the elite. As one Pro Chemnitz demonstrator, a Dutch man who would only give the name Ed, told me with a laugh, "The word Nazi doesn't even mean anything to me anymore."

When I brought up to Ed or any of his friends the much-circulated videos of people doing Hitler salutes, I would get two answers: those people were over-represented by the media, and anyway, they were probably planted by Germany's intelligence agencies to discredit the protests — a wild conspiracy theory, but one shared by many people in Saxony.

As for trying to explain to demonstrators that there is such a thing as unconscious racism — that you can be racist even if you don't think you are — good luck. One man, who carried around a placard bearing a self-drawn caricature of an African — thick lips, earrings, etc. — and a slogan suggesting the politicians were turning Chemnitz into an "African enclave," flatly denied that it was racist: "That's just a fairy-tale figure!" he shouted when a young man confronted him.

But these are just the people at the actual demos. What was more worrying is that when "ordinary people" (another phrase that lost its meaning in my travels) say things you'd expect AfD supporters to say.

One of those people was Lutz Oschatz, a perfectly affable middle-aged Chemnitzer who described himself as "not right- or left-wing," who would not join the Pro Chemnitz demo, but who still believed that the police paid more attention to Nazis than they did to "preventing crime in the first place."

When I asked him what he meant by this, he answered: "I wouldn't have let them in, most of them. We don't need economic migrants here — if we take anyone then only those who really need to come because they're in a desperate situation. I don't know if we can afford it culturally." Should I have called him a Nazi too?

And this leads to a central disconnection in the whole debate: the conflation of "right-wing" and "racist." It's completely possible for people who consider themselves apolitical, or even left-wing, to hold racist views, even if they don't admit it. Racism isn't a political position.

Almost every argument you make is countered with another social problem, another misconception, another "what about?" The cynicism about mainstream politics is all-pervading: if you pointed out how Merkel's asylum laws have got stricter and stricter in the past few years (chipping away at the rights and benefits asylum-seekers, till many of them are condemned to homes for months on end while their applications are being processed), or if you point out that there are hardly any refugees coming into Germany anymore — they simply deny that this is true. It's a brick wall.

And the final problem is that even Nazis are people with families. One old Chemnitzer who had joined a far-right demo, on the day after the death of German-Cuban Daniel H., had looked across the police lines and seen his 17-year-old granddaughter in the anti-fascist counterdemo, screaming that he was a Nazi.

"The young people are completely messed up in their education," he told me. "She lives next door, and I helped her install a window in the roof — then I saw the huge anti-fascist flag she had in her room — and I said to her, 'I would go out on the streets together with you against Nazis, but I'm not one — it's awful what you're doing to me.'" But... but... you were with Nazis...

The arguments are exhausting — you feel like you have to unpick everything, break down every notion to a more and more basic starting point. Germany's disconnection is vast, but it's also true that, except for the hardcore Nazis, they will actually still talk to you, even if you are from the state-supporting media.

Chemnitz wants to be the European Capital of Culture in 2025. But the recent riots have clouded its reputation. How can culture help the city deal with right-wing extremism, and change perceptions abroad? (11.09.2018)

Accused of taking too soft a stance on the far-right, Germany's domestic spy chief got a grilling in parliament. But his answers reassured his boss, Interior Minister Seehofer, he's the right man for the job. (12.09.2018)