Accused of taking too soft a stance on the far-right, Germany's domestic spy chief got a grilling in parliament. But his answers reassured his boss, Interior Minister Seehofer, he's the right man for the job. 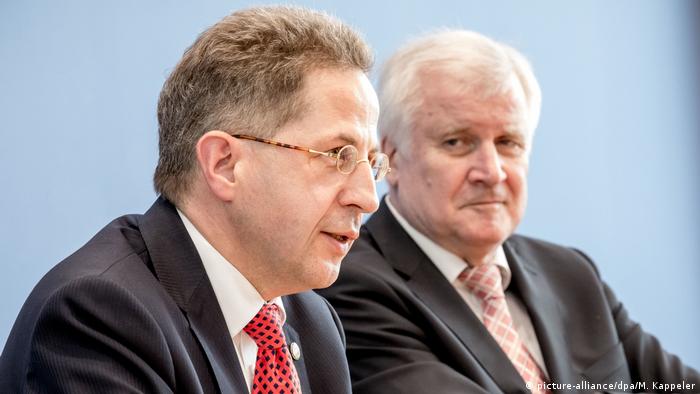 German Interior Minister Horst Seehofer said Wednesday that he saw no reason for Hans-Georg Maassen, the head of the domestic intelligence agency, to resign following criticism that the spy chief has downplayed the threat of right-wing extremism in Germany.

Seehofer, who also heads the conservative Bavarian Christian Social Union (CSU), voiced his support for Maassen following a special sitting of the Committee on Internal Affairs in Berlin that lasted hours as it grilled Maassen on his controversial actions over the past weeks.

"I have told the committee that … I don't see any grounds for personal consequences [for Maassen]," the interior minister said, adding that he had no doubts as to Maassen's commitment to fighting right-wing extremism. 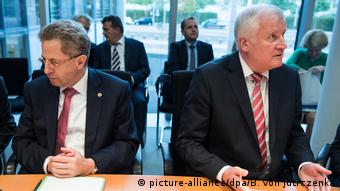 Maassen has come under fire over his reaction to the anti-migration protests in the eastern German city of Chemnitz, which included far-right extremists "hounding" foreigners and showing the Nazi salute, which is illegal in Germany. In an interview with Germany's Bild newspaper, the intelligence head had questioned whether such incidents had actually taken place, saying that there was "no evidence to suggest video footage of this alleged incident circulation on the internet is authentic" and describing the reports as "deliberate misinformation."

His words also challenged Chancellor Angela Merkel's statements on the events in Chemnitz.

Politicians immediately demanded clarification from Maassen following his interview, with many questioning whether he was fit to continue leading the Office for the Protection of the Constitution (BfV), Germany's domestic intelligence agency. Maassen has also held unexplained meetings in the past with members of the anti-immigration Alternative for Germany (AfD).

Some 58 percent of Germans have little or no confidence in the office, according to a Civey opinion poll published Wednesday.

Earlier this week Seehofer had asked Maassen for further clarification regarding the Bild interview but refrained from criticizing him, and he defended the intelligence head on Wednesday after the committee's meeting. Seehofer praised Maassen for his work and stated that he had argued convincingly and with nuance.

The motivation behind Maassen's interview was understandable, even if the message was off-key, Seehofer added.

Maassen's reported expressions of regret may not be enough to satisfy some of his critics, however. On the sidelines of Wednesday's meeting, the Social Democratic (SPD) politician for internal affairs, Eva Högl, said her party had "strong doubt" about whether Maassen was the right man to head the domestic intelligence agency. She added that trust in him had been broken.

The SPD, which is currently part of Merkel's grand coalition government,  had demanded that Seehofer consider "personal consequences" for Maassen. Kevin Kühnert, head of the SPD's youth arm, said his party should quit the governing grand coalition if Maassen remains in office.

"We are at the point where we need to draw a red line," he told Der Spiegel news magazine. "If [Maassen] stays in office, the SPD simply cannot continue in this government."

According to those present at the committee meeting, Maassen aimed his own criticism at the media, stating that terms like "hounding" should not be used lightly in writing because they can redefine reality.

The business-friendly Free Democrat (FDP) politician at the sitting, Konstantin Kuhle, said Maassen was "living in his own world" and accused him of fanning an already fiery debate on migration and press freedoms.

The FDP, however, has said the decision over consequences for Maassen lies with Seehofer.

Along with the SPD, politicians from the Green and the Left parties have said Maassen is no longer fit for his role, and accused him of serving right-wing conspiracy theorists with his actions.

Germany's interior minister did not criticize the nation's domestic intel boss for casting doubt — and contradicting Chancellor Angela Merkel — regarding far-right violence in Chemnitz. He has, however, asked for proof. (10.09.2018)