Angela Merkel hits out at AfD on far-right violence | Germany | News and in-depth reporting from Berlin and beyond | DW | 12.09.2018

Angela Merkel hits out at AfD on far-right violence

German MPs have held a tense debate in the Bundestag in the aftermath of far-right protests in eastern Germany. Chancellor Angela Merkel's immigration policies and the national budget were also in the spotlight. 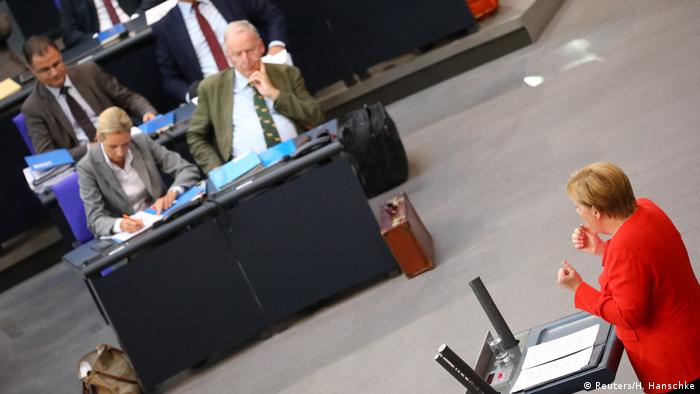 Lawmakers in Germany's lower house of parliament, the Bundestag, gathered for a lively and occasionally bad-tempered debate on Wednesday, with immigration, far-right violence, and the nation's budget high on the list of issues.

The far-right Alternative for Germany (AfD), the largest opposition party in the Bundestag, kicked off the debate by taking aim at German Chancellor Angela Merkel and the government's criticism of violence at far-right rallies in Chemnitz.

AfD co-leader Alexander Gauland condemned the depiction of protesters who took part in protests in the eastern German city of Chemnitz — many of which were organized by right-wing extremist groups. He described the majority of them as "concerned citizens."

AfD leader Gauland: 'We should be combatting the causes that drive people to leave their homes'

He acknowledged that some protesters did give Hitler salutes during the demonstrations, which is illegal in Germany, but he said that they were "in a minority" and that "the real crime was the bloody act committed by two asylum-seekers in Chemnitz."

Taking aim at Merkel's comments on the protests, Gauland said: "Hatred is not a crime." "Who is endangering public peace in this country? Not us," he concluded.

'The means of fascism'

Gauland's speech drew an extraordinary intervention from Martin Schulz, the Social Democratic Party's (SPD) chancellor candidate from last year, who stood up to accuse the AfD of adopting "the means of fascism" — specifically, the strategy of reducing complex political problems to a single topic, "in general related to a minority in a country."

"'Migrants are to blame for everything' — there have been similar words in this house before," Schulz said. "It's time for democracy to defend itself against these people." His fellow Social Democrats, along with delegates from the Green and Left parties, stood up to applaud the former leader's impassioned statement.

Merkel also pushed back against Gauland's comments, saying that outrage over a German man's death cannot justify the violence that took place. "There is no excuse or justification for attacking people who look different," she said.

Schulz: 'It's time for democrats in this country to stand up and defend democracy'

Merkel's speech was then promptly answered by an AfD intervention from MP Stephan Brandner, chairman of the Bundestag's justice committee, who called Merkel's "general statements" about "migrant crime" a "mockery of the victims of your policies."

The mother of all problems

The leader of the business-friendly Free Democratic Party (FDP), Christian Lindner, used his speech to rail against both sides. Lindner, who has himself been criticized for making populist right-wing overtures in the past few months, said the German people were tired of seeing the "ritualized" outrage from the AfD being answered by equally routine outrage from the left.

Lindner expressed frustration that political debate in Germany was being reduced to the question of migration. After listing all the things that the government should have done better in its budget (driving digitalization, investing in research and education, unburdening taxpayers), Lindner was quoted as saying "we could tackle all these problems, but there's no point, because once again all we talk about is migration."

Lindner also addressed Interior Minister Horst Seehofer's contentious statement that "migration was the mother of all problems," widely read as an attempt to field the populist right-wing vote ahead of an election in Seehofer's native Bavaria next month.

"Mr. Seehofer, migration is not the problem," Lindner said. "The problem is the management of migration, for which your party has also been responsible over the last five years."

Merkel: "We are all very aware of our responsibility"