The AfD′s Alexander Gauland: From conservative to nationalist | Germany | News and in-depth reporting from Berlin and beyond | DW | 04.06.2018

Alexander Gauland is one of two leaders of the far-right, nationalist AfD party - and he's known for his controversial, headline-grabbing statements. 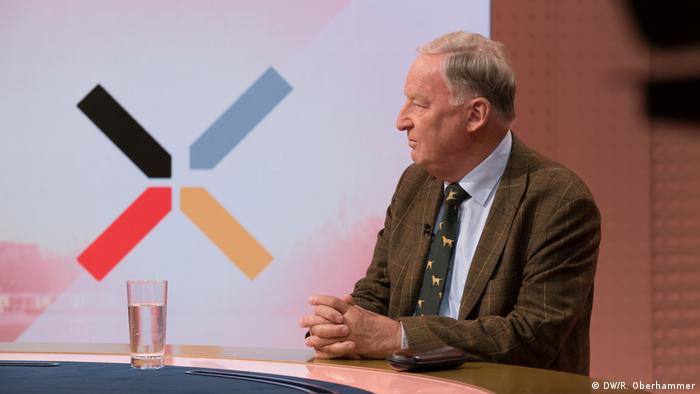 Alexander Gauland was a co-founder of the populist conservative AfD (Alternative for Germany) party in 2013. Back then, the party's central issue was euro-skepticism and the rejection of the EU's common currency; now it's anti-refugee and anti-migrant sentiments.

In an interview with Deutsche Welle (DW), Gauland stated that Islam as a cultural and religious entity was not part of Germany.

During the Euro 2016 football tournament, he famously said that Germans valued national player Jerome Boateng - whose father is from Ghana - as a sportsman but "would not want to live next door to someone like him."

After the public outcry - and criticism from Angela Merkel - that followed, the AfD was forced to apologize for the statement.

And in March 2017, Gauland called for a travel ban on Muslims similar to the one President Donald Trump has been trying to instate in the US, and in 2016 he said that "not everyone who holds a German passport is German," referring to people with non-German roots.

Born in the eastern city of Chemnitz in 1941, Gauland would flee the German Democratic Republic at the age of 18 to study law and political science at the Philipps University in Marburg. However, as large numbers of displaced people sought asylum in Germany in 2015 and 2016, Gauland was quick to say that his own experience had not been that of a refugee.

"That is something else: I'm German," Gauland said. "And I went from Germany to Germany. It is quite different when someone comes from Eritrea or Sudan. He has no right to the support of a foreigner."

Gauland began his political career as a member of the conservative Christian Democrats (CDU) in 1970, working at the parliament press office in the central city of Bonn, then the capital of West Germany. From 1974 to 1975, he worked in Edinburgh, Scotland, as a press officer at Germany's general consulate.

It was most likely here that Gauland discovered his affinity for the green tweed jackets that are commonly associated with the aristocrats and landowners of Britain's past - and that have also become something of a trademark for him.

Second career in the literary world

Upon returning to Germany, Gauland became the right-hand man of the CDU's Walter Wallmann, the mayor of Frankfurt at the time. Through the years Gauland built up a reputation as one of the conservative minds of the CDU. He is also a liberal in the economic sense, believing in minimal state intervention.

In 1991, Gauland began his second career as a publicist and became editor of the cross-regional daily Märkische Allgemeine in Potsdam, where he stayed until 2005.

It was arguably his published books on conservatism, in which his tone became increasingly gloomy and pessimistic, that are most emblematic of his shift to the right and his eventual move to the AfD.

In his best-known book from 2002 "Anleitung zum Konservativsein" ("Instructions on how to be a Conservative"), Gauland bemoaned what he considered the diminished roles of concepts such as "Heimat" (homeland) and "deutsche Leitkultur" (German dominant culture) in political discourse. Railing against the "fun society," he also demanded a "deceleration" of technological progress.

But it would take another decade before Gauland jumped ship from Chancellor Angela Merkel's CDU and joined the AfD.

Together with the publicist and journalist Konrad Adam and economist Bernd Lucke, Gauland founded the euroskeptic "Wahlalternative 2013" ("Election Alternative 2013"), which quickly became the AfD.

By February 2014, Gauland was elected regional chairman of AfD Brandenburg and led the party into the state parliament with 12.2 percent of the vote just seven months later. The AfD emerged as the largest opposition party in the central German parliament, the Bundestag, following the general election in 2017.

Alexander Gauland's description of the Nazi era as "chicken shit" - a brief stain in Germany's otherwise grand history - was seen as an intentional belitteling of the Holocaust, and drew immediate strong condemnation from all quarters.

Opinion: Give Gauland, AfD a red card for Boateng slur

Yesterday the church, today a national soccer hero: The Alternative for Germany keeps seeking to discredit moral authorities and societal role models. You can only fight the AfD with facts, DW's Gero Schliess writes. (29.05.2016)