The head of Germany's domestic intelligence agency says there's "good reason to believe" the reports were deliberate misinformation. His comments prompted a flood of criticism and dispute from politicians and the press. 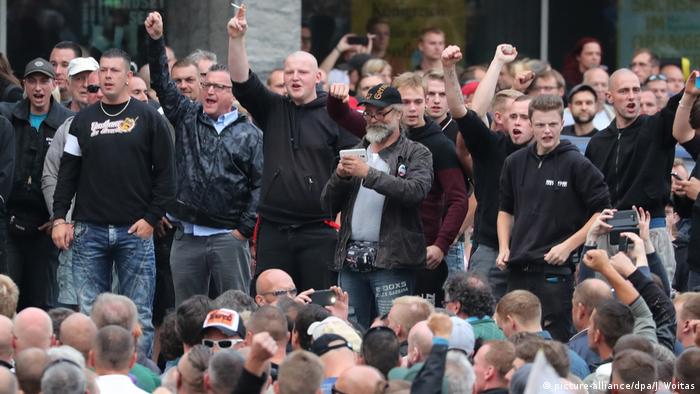 The president of Germany's domestic intelligence agency, Hans-Georg Maassen, has expressed doubts about reports that right-wing extremists were chasing down non-Germans during demonstrations in Chemnitz, Bild newspaper reported Friday.

"I share the skepticism towards media reports of right-wing extremists chasing down [foreigners] in Chemnitz," Maassen told Bild.

Far-right protests in Chemnitz broke out on August 26, after a 35-year-old German man was stabbed to death. The demonstrations were quickly met by counter-protests. Two men, one Syrian and one Iraqi national, are in pre-trial detention over the stabbing in Chemnitz and a third suspect has been wanted since Tuesday.

Referencing one of the videos posted online showing far-right protesters chasing after people who looked non-German, Maassen said: "There is no evidence to suggest that the video of this alleged incident circulating online is authentic."

Maassen told Bild that his Office for the Protection of the Constitution (BfV) had "no reliable information that such pursuits had taken place."

Maassen has recently come under fire for unexplained meetings with members of the anti-immigration Alternative for Germany (AfD) party. A book by a former AfD member has even alleged that during one such meeting, with former AfD chairwoman Frauke Petry, Maassen gave tips for avoiding monitoring by the BfV.

It was unclear exactly which video Maassen was referring to in his comments to Bild — as several videos depicting similar assaults surfaced during the protests — and he did not provide further evidence backing up his claim that at least one video was faked.

The video that Maassen likely meant was one that was widely shared on Twitter, depicting a group of far-right protesters chasing men who looked non-German and attempting to kick one of them.

Contrary to Maassen's findings, journalists and social media verification experts have said there is no evidence to suggest that the videos were faked, reported German public broadcaster ARD. Journalist Lars Wienand and others were able to confirm the time, date and location of one the most-shared videos of far-right protesters.

"In Chemnitz there was a high level of emotionalisation and rapid mobilisation, which have also been adopted by right-wing extremists. Social media also played a major role here in mobilizing and forming individual opinions," it said in a statement.

"However, it is precisely in these areas that fake news and attempts at disinformation can be found again and again. The BfV is examining all accessible information with regard to its truthfulness in order to arrive at a reliable assessment of the events. The examination, particularly regarding the possible hounding by right-wing extremists against migrants, will continue.

On Friday, German Chancellor Angela Merkel's spokesman Steffen Seibert told reporters in Berlin that Maassen hadn't spoken with the government about possible misinformation concerning the Chemnitz protests. The Interior Ministry also said that it hadn't recieved any reports from the BfV concerning the protests.

The state premier of the regional government in Saxony, Michael Kretschmer, has also claimed that right-wing protests in the city did not lead to the mob pursuit of migrants.

But Merkel is among those to have described the footage as showing targeted harassment.

Maassen 'not up to the job'

Reactions to Maassen's comments were split on Friday, with the center-left Social Democrats (SPD), Greens, the business-friendly Free Democrats (FDP) and the Left harshly criticizing the intelligence chief's remarks.

"I don't expect any trustworthy assessments from Mr. Maassen any more," said Katrin Göring-Eckardt, the parliamentary party leader for the Greens. "The fact that he only commented on a video, but not on the acts of violence and the public displays of anti-constitutional symbols in Chemnitz, shows me that Mr. Maassen is not up to the job."

Members of Merkel's center-right Christian Democrats (CDU) as well as the German Federation of Journalists (DJV) called for Maassen to provide evidence for his claims.

"The term 'deliberate misinformation' is a very serious accusation that places the media under suspicion of manipulation," DJV head Kajo Döhring said in a statement, adding that whoever makes such claims must be able to back them up.

Maassen did receive support from other conservative lawmakers, particularly from the Christian Social Union, the Bavarian sister-party to Merkel's CDU.

"It's his job to inform the public about where his facts stand on this," CSU parliamentary party leader Alexander Dobrindt said, defending Maassen's decision to speak to the press before informing the German government.

New protests organized by the far-right group "Pro Chemnitz" are expected to take place on Friday, as well as a counter-protest concert called "Stronger Together," which is urging for "openness and diversity."

Why is the eastern German state of Saxony so often associated with right-wing extremism? Henrik Böhme believes that while the rampant racism is inexcusable, the Saxons are widely misunderstood. (31.08.2018)

Authorities were outraged after far-right groups shared an illegally-published arrest warrant tied to a stabbing that sparked anti-immigrant protests. With pressure mounting, a prison guard turned himself in. (31.08.2018)

Four members of a far-right group have been injured in the eastern German city of Zwickau, during clashes between extremists and counterdemonstrators. The victims were attacked with unknown blunt instruments.