Saxony premier: 'There was no pogrom in Chemnitz'

Saxony's state Premier Michael Kretschmer has claimed reports of mob violence at anti-immigrant protests in the city of Chemnitz were exaggerated. He was accused by political opponents of pandering to the far right. 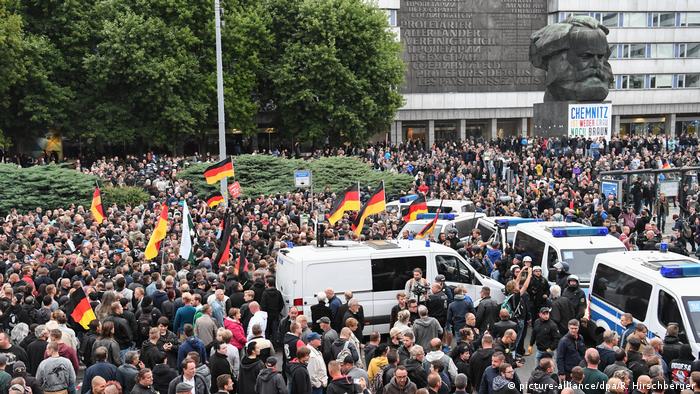 The state premier of the the regional government in Saxony, Michael Kretschmer, on Wednesday claimed that right-wing protests in the city of Chemitz had not led to the mob pursuit of migrants.

Kretschmer told members of the state parliament that some of the reporting of the situation had been overhyped, in particular reports of protesters "hounding" people in the city who appeared to be foreigners.

Right-wing protests in Chemnitz have dominated headlines in Germany — and further afield — since the stabbing to death of a 35-year-old German man on August 26, for which an Iraqi and Syrian man were arrested. Police are now seeking a third suspect.

"One thing is clear. There was no mob, there was no hunt and there was no pogrom in Chemnitz," said Kretschmer, a member of Chancellor Angela Merkel's Christian Democrats (CDU).

Kretschmer said he remained convinced that far-right extremism was the "biggest danger to our society," with numerous reports of neo-Nazis making Heil Hitler salutes at rallies.

However, Kretschmer condemned the way events in the city had been characterized by media outside Saxony, saying it was "astonishing that those who are so far away have passed a particularly sweeping and harsh judgment on this city."

The Chemnitz case is the latest in a series of violent crimes involving asylum-seekers as suspects that have received huge media attention and prompted public protests at the scene of the crime. The far-right Alternative for Germany (AfD) party has been able to capitalize on anti-refugee sentiment, particularly in eastern states like Saxony, which votes for a new state parliament in September next year.

Chancellor Merkel appeared to contradict her party colleague's assessment of the situation.

"We saw pictures that very clearly revealed hate and thereby also the persecution of innocent people. One must distance oneself from that," said Merkel.

In response to a question about Merkel's comments, Kretschmer told Germany's Welt newspaper that he had also been "horrified" by instances of violence, and saw no contradiction with what Merkel had said. He argued that the extent of the violence had merely been overstated.

"I don’t think it’s acceptable that a whole city or state is put under suspicion," he said. "That is as absurd as it is irresponsible, because it only benefits the extremists."

"The CDU in Saxony has apparently not understood that there is no use in playing up to the right. If Mr. Kretschmer still doesn't understand that, then he is beyond help."

"By downplaying this, Mr. Kretschmer is just continuing to look the other way, which is exactly what led to Chemnitz. There is obviously a serious problem with the right wing," Baerbock told Bild.

A concert to protest neo-Nazi violence has drawn a massive crowd in Chemnitz. But as impressive as it was, it still doesn't negate the fact that thousands of people fear their country is being overwhelmed by migrants. (03.09.2018)

Can Germany’s far-right AfD be subjected to surveillance?

As politicians call for the Alternative for Germany (AfD) party to be monitored by domestic security authorities, DW looks at the criteria that must be met for this to happen.  (03.09.2018)