Chemnitz fact check: Were foreigners chased down during protests? | Germany | News and in-depth reporting from Berlin and beyond | DW | 09.09.2018

The head of Germany's domestic intelligence agency has said he believes a video showing a non-German being "hounded" by mobs in Chemnitz was staged. DW takes a closer look at the evidence. 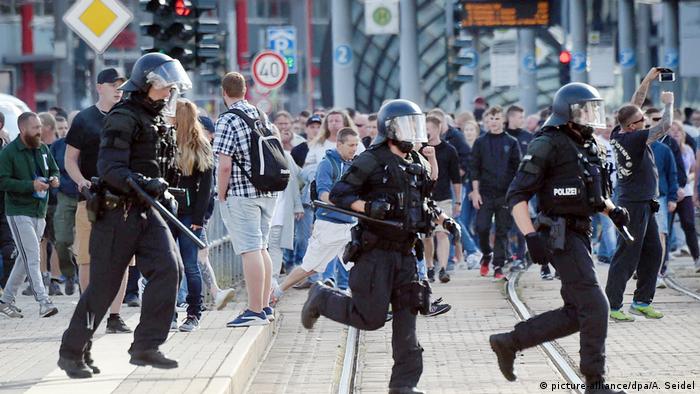 Hans-Georg Maassen, the head of Germany's domestic intelligence agency (BfV), has cast doubt over what precisely happened during the protests in Chemnitz on August 26.

In an interview with German tabloid Bild on Friday, Maassen appeared to downplay reports and video evidence of far-right extremists chasing down foreigners during the demonstrations in the eastern German city two weeks ago.

The BfV chief said German intelligence circles had "no reliable information that such pursuits had taken place."

Referring to one of the videos posted online, Maassen said "there is no evidence to suggest that the video of this alleged incident circulating on the internet is authentic."

Although Maassen did not specify which video he was talking about, Bild has posted a video uploaded to Twitter by user Antifa Zeckenbiss. The video was widely circulated online and has been referenced as evidence that right-wing mobs in Chemnitz had targeted non-Germans.

What does the video show? In the video, a group of protesters can be seen ganging up on a man with black hair, shouting xenophobic remarks, such as "You're not welcome here!" and "What's the matter, you Kanaks?" (A German derogatory term for people with a supposedly southern or Middle Eastern appearance). Just before the video ends, one of the mob members attempts to swing a kick before the victim runs away.

Another person in the mob then turns toward the camera, revealing his t-shirt with the right-wing slogan "Tradition, not Invasion," emblazoned on it.

When was the video uploaded? The video was uploaded to Twitter just before 9 p.m. local time (1900 UTC) on August 26, 2018, the day the first of several far-right demonstrations and counterprotests broke out in Chemnitz.

Where did the attack happen? The incident took place by Chemnitz's Bahnhofstrasse, just across the road from the Johannisplatz square, a common meeting point for members of the migrant community. It was also the scene of clashes between police and protesters in the ensuing demonstrations.

The square is located close to Chemnitz's main train station, where hundreds of protesters arrived in the city, and just 150 meters (about 500 feet) away from the main route of the march.

Who was the victim? The victim is reported to be 22-year-old Afghan migrant Alihassan S. In an interview with the news website ze.tt, a sister publication of Germany's Die Zeit newspaper, he described how the mob approached him and his girlfriend as he was filming the crowd arriving in central Chemnitz. Alihassan S. said he was struck with a bottle of beer by the man seen wearing blue in the video. His girlfriend was then hit in the face before the incident seen in the video played out.

When did the incident occur? The attack appeared to have occurred on August 26, the day the video was uploaded. One of the main people of reference is a bald-headed man sporting a turquoise shirt who appears to be part of the mob. He stands out in two other videos recorded in the same location, including the one reportedly shot by Alihassan S. that started the assault. 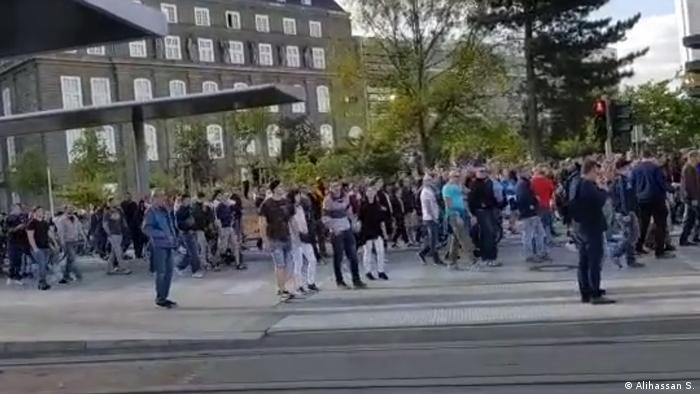 A screenshot of the video recorded by Alihassan S. shows crowds of right-wing protesters arriving in central Chemnitz, including the bald-headed man in the turquoise T-shirt (right of center)

Die Zeit claims to have seen the metadata from the video shot by Alihassan S., and maintains that it was recorded on August 26. 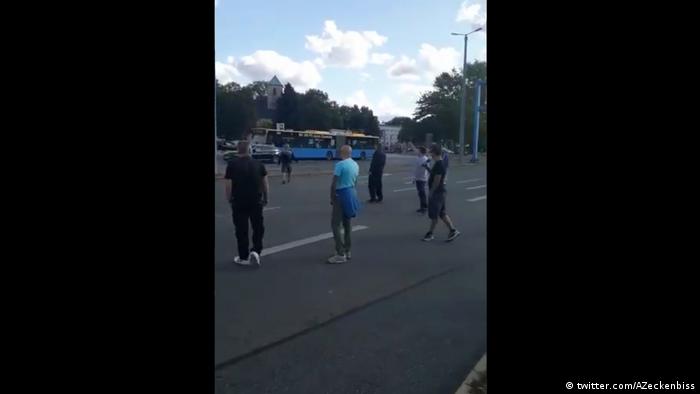 In this screenshot from the Twitter video, the man in the turquoise T-shirt is seen during the mob attack on Alihassan S.

The precise time of the incident remains unknown, however. According to reports, the right-wing marches began at around 4 p.m. local time, while journalist Johannes Grunert first tweeted that non-Germans were being hounded by far-right groups shortly after 5 p.m.

Is there any other evidence? A number of other videos uploaded on August 26 show people in the right-wing march suddenly dash toward an unseen object or person. It remains unclear whether they were running toward or away from something. In one of the videos, the bald-headed man in the turquoise shirt can be seen among the people storming off.

What do the local authorities say? The Dresden Public Prosecutor's Office told Die Zeit that it believed the footage to be genuine and confirmed that a criminal complaint for bodily harm had been made in connection with the video. Chemnitz Police Chief Sonja Penzel also said there had been reports of mob-like behavior directed at an 18-year-old Syrian, as well as a Bulgarian national.

Has Maassen's position become untenable? Based on the evidence, Maassen's assertions that the video was "deliberate misinformation" do not stack up. The timing, location and perpetrators all indicate that the incident did take place in Chemnitz on August 26, as the right-wing demonstrations began to break out.

After Maassen's interview with Bild was published Friday, the premier of the state of Lower Saxony, Stephan Weil of the center-left Social Democrats, said "question marks were starting to mount up" with him as to whether the BfV chief was up to his job. Several lawmakers have also denounced Maassen's comments, while journalist Lars Wienand, who has led efforts to verify the footage, described Maassen's assertion as "absurd" and "gaga."

The BfV chief has yet to explain why he believed the video of the attack was faked. A statement issued by the BfV late on Friday said Maassen was not referring to a specific video but was instead warning about fake news and doctored images making the rounds on social media.

Overruling an earlier decision, judges ordered a small far-right party to remove its controversial posters that appeared to target the Green Party.