Jewish restaurant attacked during Chemnitz protests | Germany | News and in-depth reporting from Berlin and beyond | DW | 08.09.2018

A gang of neo-Nazis in Chemnitz allegedly staged a vicious attack on a local Jewish restaurant during a wave of violent right-wing protests. The chaos in the eastern city has sent shock waves across Germany. 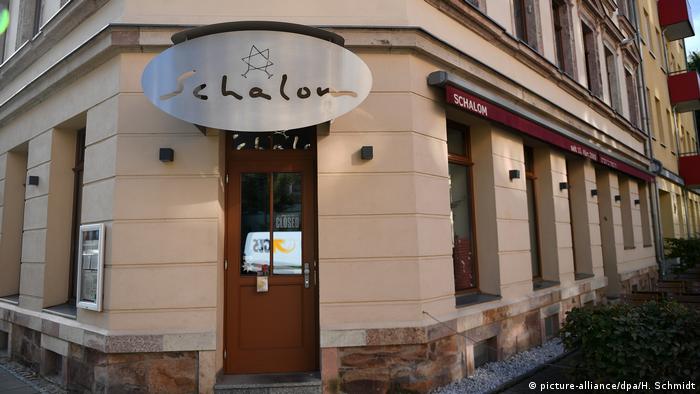 German authorities are investigating reports that neo-Nazis attacked a Jewish restaurant in Chemnitz last month as far-right protests erupted in the city, according to Die Welt am Sonntag.

The newspaper reported that a group of around a dozen masked individuals stormed the kosher eatery Schalom on August 27, shouting "Get out of Germany you Jewish pig."

The assailants allegedly threw stones and bottles at the restaurant, damaging the building's facade and shattering a window. The owner, Uwe Dziuballa, was also reportedly injured after being hit on the shoulder with a rock.

An Interior Ministry spokesman cited by Welt said investigations were ongoing, but confirmed the incident "suggests at present a politically motivated crime with an anti-Semitic background."

The German commissioner for anti-Semitism, Felix Klein, called on police and prosecutors to bring the perpetrators to justice and show that "anti-Semitic offenses will be swiftly punished."

"If the reports are true, then we are dealing with a new level of anti-Semitic crime," he said.

"It calls to mind the worst memories of the 1930s," he added, referring to the rise of the Nazis and their murderous campaign to wipe out millions of Jews across Europe.

Read more: Saxony premier: 'There was no pogrom in Chemnitz'

Far-right groups staged riots in Chemnitz after the fatal stabbing of a German man on August 26. Two asylum-seekers — a Syrian and an Iraqi — have been arrested over the killing. A third suspect is being sought.

There have been almost-nightly rallies in the eastern city. Sometimes the marches have turned violent, with reports of attacks on police, journalists and people perceived to be migrants. There have also been confrontations in the streets between right-wing protesters and counterdemonstrators denouncing xenophobia.

The unrest has triggered a nationwide debate about right-wing extremism and xenophobia in parts of German society. It has also exposed an apparent rift between Chancellor Angela Merkel and security officials.

Merkel said the images from Chemnitz "very clearly" showed hate and "the persecution of innocent people."

Hans-Georg Maassen, the head of Germany's VfS domestic intelligence service based in Cologne, sparked controversy on Friday when he voiced skepticism over reports that right-wing extremists had "hunted" down foreigners, suggesting that an internet video depicting such behavior could have been faked.

He was contradicted Saturday by Dresden senior public prosecutor Wolfgang Klein, who told the online outlet of the newspaper Die Zeit: "We have no indication that the video could be a fake."

Klein added that his Dresden office was using the video for its investigation into events in Chemnitz.

Dresden is the capital of the state of Saxony; Chemnitz is its third-largest city.